By Wednesday night, official rosters will be set for the 2022 USFL season. As the league and its fans prepare for the two-day draft event beginning this Tuesday, now is a good time to begin evaluating the talent. In this case, let’s take a look at some of the possible 2022 USFL Defensive Back candidates. These names come from the initial USFL Player Pool that has been put together by the SGPN team.

The USFL draft lottery is in the books and the official draft order has been established. We have also been provided with a partial pool of players for the USFL draft which is scheduled for Tuesday 2/22/22. That means we can start evaluating the talent at each position. Over the next couple of days, we’ll take a deep dive into these potential draftees. The season starts on April 16th and the excitement is building. Here’s the WR breakdown.

A player like Prince Charles Iworah all but epitomizes what the USFL is all about. Forever the journeyman player, Iworah has had several opportunities to play in the NFL but just hasn’t been able to make one stick. He was drafted by the 49ers in 2016 in the seventh round. He went on to play 16 special teams snaps in Week 15 against the Rams in his only active roster game. In that game, he recorded his only professional tackle.

Iworah started his football journey as a running back and only converted to cornerback upon his arrival to Western Kentucky. Over the course of his college career, he registered 90 total tackles, 11 passes defended, five interceptions, and a forced fumble. He most recently signed with the Montreal Alouettes in 2021 but was placed on the suspended list a month later to play for the Conquerors of The Spring League. The raw talent is there, he just needs a chance to prove consistently prove it.

What makes Mason Gray attractive in this draft is his most recent playing time. Gray suited up for the Green Bay Blizzard of the Indoor Football League last season. In seven games on the 50-yard field, he collected 32 total tackles. He also tallied four interceptions with one of them returned for a touchdown. That total was the sixth-best in the league for the 2021 IFL season. Anyone familiar with the Indoor-style game knows that it is not a friendly environment for defensive backs. His success there is a strong indicator that he is a good 2022 USFL Defensive Back candidate.

K Henry Nell (@henry_nell) hits a high archer to the back of the endzone that gets fumbled. IFL Defensive Player of the Week Mason Gray (@6_mg1) pulls it out of the pile for the TD pic.twitter.com/SJ4HppNq5L

In the 2019 NFL preseason, Jojo Tillery made some noise rather quickly as a member of the Tennessee Titans. On his first snap as a pro, the young safety picked off Clayton Thorson late in the 4th quarter. It was one of only two INTs for the Titans’ secondary all preseason. Despite his nine tackles in three games, he failed to make the final team. He signed with the Calgary Stampeders before the start of what was supposed to be the 2020 season. Due to the league shuttering the season due to COVID, Tillery was never able to take the field. Most recently, he was making big plays for the Alphas of The Spring League.

As a member of the Frisco Fighters last season, Khalil Williams accounted for 60 total tackles. He also added a forced fumble, an interception, and eight passes defended to his IFL resume. In his time in college, Williams totaled 150 tackles and an interception. In his senior year, he was named to the Dave Campbell’s All-Texas Preseason Team as well as The American All-Conference Second-Team. He is another 2022 USFL Defensive Back candidate that will benefit from more recent playing time.

If you're dreaming about listing Pro Football Player on your resume, the Frisco Fighters are holding tryouts Saturday, February 6 at 9:00 am. For more information: https://t.co/om2zYfdUVQ. Also check out how Khalil Williams went from trying out for the team to the final roster. pic.twitter.com/hckLFPhDkF

Last year, Darrian Winston took the field overseas in Poland for the Warsaw Eagles. Before that, he spent some time in the then Champions Indoor Football League as a member of the Duke City Gladiators. In a game that clinched the Gladiators their first franchise playoff berth, he accounted for two of four interceptions on the night. During his time with the Rostock Griffins of the German League, he led the team in interceptions.

In his two years at Campbell, Kam Prewitt racked up 69 total tackles, three interceptions, and a forced fumble. He would go on to be named to the Second Team All-Big South by Phil Steele. Prewitt was the ninth player in school history to return an interception for a touchdown. He also ended his college career tied for fifth in the Campbell record books with 15 passes defended. In his most recent stint with the Nothern Arizona Wranglers, he appeared in two games. During that time he had eight total tackles and an interception. He also returned a blocker PAT attempt for a touchdown against the Massachusetts Pirates.

While KJ Sails does have experience with the Chargers to his credit, that experience is limited to a single preseason game last year. In that game against the Seahawks, he managed only one tackle. He finished his time in South Florida with 64 total tackles, three interceptions, a forced fumble, and two fumble recoveries. He was invited to both the 2020 East-West Shrine Game and the NFLPA Bowl. If ever there was a perfect fit for this league, Sails is it. He’s young, he’s hungry, and he just wants to play to prove to the world that he can.

As a senior in 2019 at Jacksonville University, Jeremiah Johnson enjoyed a robust season. He recorded 75 total tackles, three forced fumbles, five passes defended, and an interception. It was a good enough performance to garner All-Pioneer League Second-Team honors. His only action since then was a brief affiliation with the Milano Seamen of the Italian Football League. In the summer of 2021, Johnson suited up for three games with the Seamen. 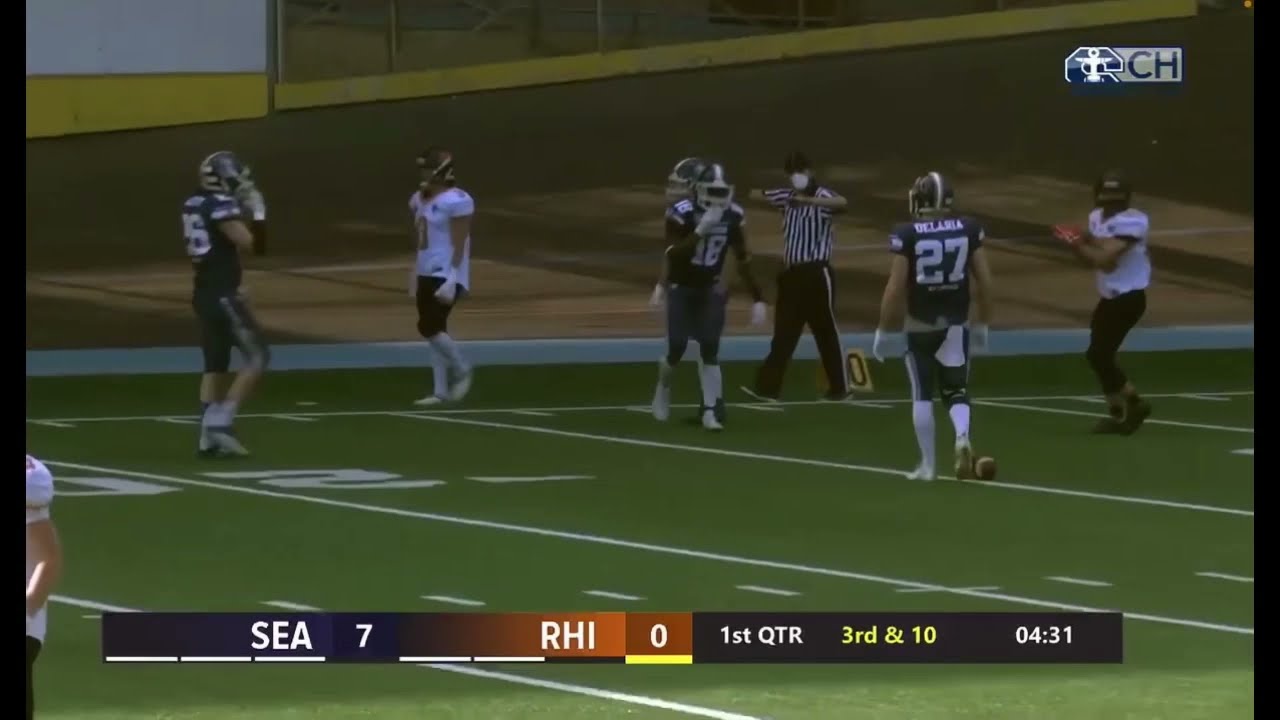 Another former member of The Spring League, RaVon Davis played for the Blues last year. One of his more notable outings in The Spring League included an interception of the Jousters. He started eight games at cornerback as a senior for Maryland. That season also saw him record his first career interception. Later that season, he added a pick-six to his resume. All told, he ended his time as a Terrapin with 88 total tackles and 15 passes defended. He also had a forced fumble, a fumble recovery, and three interceptions to go along with those.

Terps lead the nation with 18 interceptions and are just one of three teams that have at least one in every game this season! RaVon Davis kept that stat alive last weekend with this beauty! #TopPlayTuesday pic.twitter.com/zS0WARWnef

As an undrafted free agent, Donald Rutledge Jr. was set to get his shot with the Colts for the 2020 NFL season. He failed to make the active roster. Last season, he was signed to a futures contract by the Cardinals. He was unable to turn that into a full-time opportunity as well. At Georgia Southern, this 2022 USFL Defensive Back candidate took 617 defensive snaps. He totaled 50 tackles, five passes defended, and an interception as an Eagle. His college journey started as a redshirt freshman at The Citadel then moved to Savannah State before his transfer to Georgia Southern.

Donald Rutledge Jr. worked his way up the college ranks and is ready to do the same in the NFL after signing a free agent deal with the @Colts

The Rest Of The Field

J.J. Dallas: 6-0, 200lbs (Louisiana-Monroe) Dallas appeared in only six games with the Warhawks. He accumulated 16 total tackles. He played in The 2019 season of The Spring League.

Amani Dennis: 5-11, 175lbs (Carthage) Dennis touted an impressive 100 tackles over his college career. He also had 11 interceptions and 33 passes defended. He spent the 2020 season with the Generals of The Spring League.

Afolabi Laguda: 6-1, 205lbs (Colorado) Laguda most recently played in six games for the Edmonton Elks. He managed only one special teams tackle in the CFL.