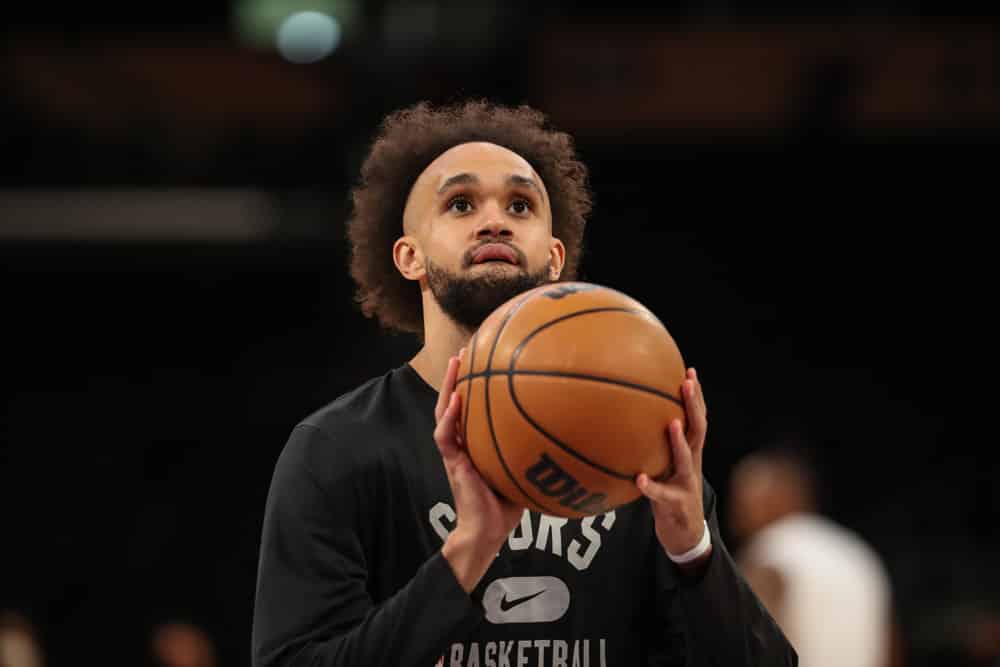 It’s a good time to gauge the strengths and weaknesses of your Fantasy Basketball Roster. We’re approaching halftime of the regular season, and COVID is sweeping through the NBA. As a result, fantasy owners are tense; now is the time to pull off a trade with a manager under duress who’s desperate to turn things around. I might even be that person! My teams have multiple players heading to COVID Protocols, but of course, my IL slots were already full! Here are some players to target to buy low in your fantasy basketball league.

So let’s review some Buy Low Trade Targets to potentially better our positions in the standings or soothe our nerves, whichever comes first. The rankings presented in this article are based on totals from my points-based fantasy league. You may see variations in your league based on scoring preferences.

Jusef Nurkic’s numbers have been solid across the past month. He’s averaging 15.3 points, 8.9 rebounds, and 2.7 assists. The recent increase in his scoring has been a pleasant surprise for fantasy owners, as he’s averaging 13.1 points on the season. Despite dropping one rebound per game from his season average of 10.1 RPG, Nurkic’s production has been consistent as he ranks #33 in total fantasy points across these same stretch of games and #45 in the past two weeks.

The downside to Nurkic is that he doesn’t grab many blocks for someone locking up your Center position on a nightly basis, so you’ll want to be sure you have that stat covered if you’re targeting him in category leagues. He’s doing well enough to warrant acknowledgment but not well enough to demand too high of a cost; he’s a great candidate to attack with a buy-low offer.

Perhaps you landed a great waiver wire addition like Cole Anthony or Josh Giddy but already have one too many guards to balance your squad. Nurkic will continue this pace, especially with CJ McCollum still set to miss a fair amount of time; the Trail Blazers need all the extra offense they can get.

Derrick White has been on terror for the past two weeks! He’s totaled the 8th most fantasy points on this stretch, and he’s collecting all the stats along the way. He’s averaged 17.5 points, 4.3 rebounds, and 4.9 assists in this span. These numbers highlight an increase in points and rebounds per game based on his season-long averages.

White was drafted in the 7th round or later in fantasy drafts this year, so plenty of players had priority ahead of him coming into the season. White ranks #24 in total fantasy points across the past month and #48 on the season; he’s clearly outplayed his perceived value to start the year. You can spry him from an owner who may not trust his recent trends to continue. Remember that White was inactive for most of last season with an injury; everyone has a negative narrative.

Start the conversation with a one for one trade you feel comfortable with and work your way from there. It may take you a few offers to close a deal on White, but I assure you it will be worth the effort; he’s a league winner this season!

Jaren Jackson Jr. is another player who missed most of last season with an injury. Jackson has had a strong season thus far but still flys below the radar playing in Memphis. He’s not a household name, which is a shame because he can do it all! Jackson Jr. can post up, hit open shots, distribute, play terrific defense, and can knock down the three-ball.

Jackson ranks #24 in total fantasy points scored in the past month. He’s averaged 18.3 points, 4.8 rebounds, and 0.9 assists in that time. These numbers are pretty close to his season averages; however, his ranking is up 14 spots from #38 on the year. While he is up two additional points from his season average of 16.4 ppg, the rebounds and assists are right about the same, with a slight decrease in rebounding volume.

Jackson Jr has recorded multiple blocks in 21 of 32 games this season and a steal in 20 of 32 games. He’s a big issue for opponents because he gets the work done on defense, and he can play both inside and out on offense. I would be willing to part with a talented player for Jackson Jr.; the ideal trade situation for me would be to part with a guard that offers some name value but may have less upside down the stretch of the year. I also like the approach of sending a high-end waiver addition and a player you believe the other owner knows well.

I would be willing to send Garrison Matthews and Danillo Gallinari for Jackson Jr. A guy like Matthews has had a lot of recent success, and Gallinari holds some name value and respectable production at this time. While that trade feels like a home run for me, I’d still be willing to offer a guy like Jrue Holiday, and at that point, I could probably get another cheap guard back alongside Jackson Jr.

Jae’Sean Tate is another player whose trending in a very positive direction. In the last two weeks, he ranks #32 in fantasy points, which is an excellent jump from his monthly total of #52. His total season ranking is #68, so it’s nice to see that he’s really turned the corner and put together a strong stretch of games.

Tate’s averages across the past month have been grand. He’s hitting 13.2 points, 4.8 rebounds, and 4.7 assists per game since 11/20/21. That’s roughly an extra point and assist per game increase from his season averages. However, while the additional offense is excellent, his rebounding numbers have taken a minor hit but not enough to cause any concern.

Tate should be on your shortlist for a buy low trade offer in your fantasy basketball league. He plays for a lousy team, gets a ton of minutes, and is asked to do a little bit of everything for the Rockets. However, his cost won’t be incredibly high; Tate was a player who was getting selected outside the top 10 rounds in fantasy drafts. In many leagues, he’s a guy that fell through the cracks and landed on waivers to start the year.

You can easily pull off a straight-up one-for-one trade for Tate. I think a perfect candidate to move for him would be someone like Dennis Schroder, a player who has the occasional hot stretch of games but doesn’t have the same ceiling in terms of potential production. Perhaps the Tate owner needs more specific stats like 3 point shooting; fire off a guy like Buddy Hield, who can rake up 3-pointers but doesn’t offer much else. Other acceptable options in this tier include Kyle Kuzma, Jordan Poole, Bojan Bogdanovic, and Nickeil Alexander-Walker. I’m sure there’s someone on your roster with similar value.

Ricky Rubio had a hot start to the 2021-2022 campaign. He averaged 14.7 points, 6.5 assists, and 3.9 rebounds through his first 15 games of the year. Since then, his scoring has dropped significantly; across the last 16 games, he’s fallen to 10.9 points per game but has maintained assists and rebounds nearly to the decimal. I’m confident you can find an owner to deal Rubio at this juncture of the season. His scoring has come back to reality, and there could be a manager that’s ready to move on given the recent decline.

Rubio’s assist totals should be very lucrative to you. He ranks #10 in the NBA with total assists collected. He also adds in very consistent defense with his steal totals; he’s only had eight games this season where he hasn’t recorded a steal. Rubio has hit over 1.5 steals in 10 of 31 games as well. He’s a deeper option at the PG position, but he’s had strong stretches throughout the season that have aided the Cleveland Cavaliers‘ rise; the team currently sits 3rd in the East with a 19-12 record. This combo could make Rubio a key fantasy basketball buy low target.

Rubio had very little to no perceived value coming into this season. He was selected in the 13th round in my fantasy draft; however, some leagues may have ignored his presence entirely and let him fall to the waivers. He won’t cost much to acquire; I would start by offering a trending big man you’re buying won’t maintain his marks to end the season. Players that come to mind include Chimezie Metu, Al Horford, Daniel Gafford, Saddiq Bey, and Steven Adams.

This sequence with Ricky Rubio 🔥 pic.twitter.com/Ly5S9omrsO