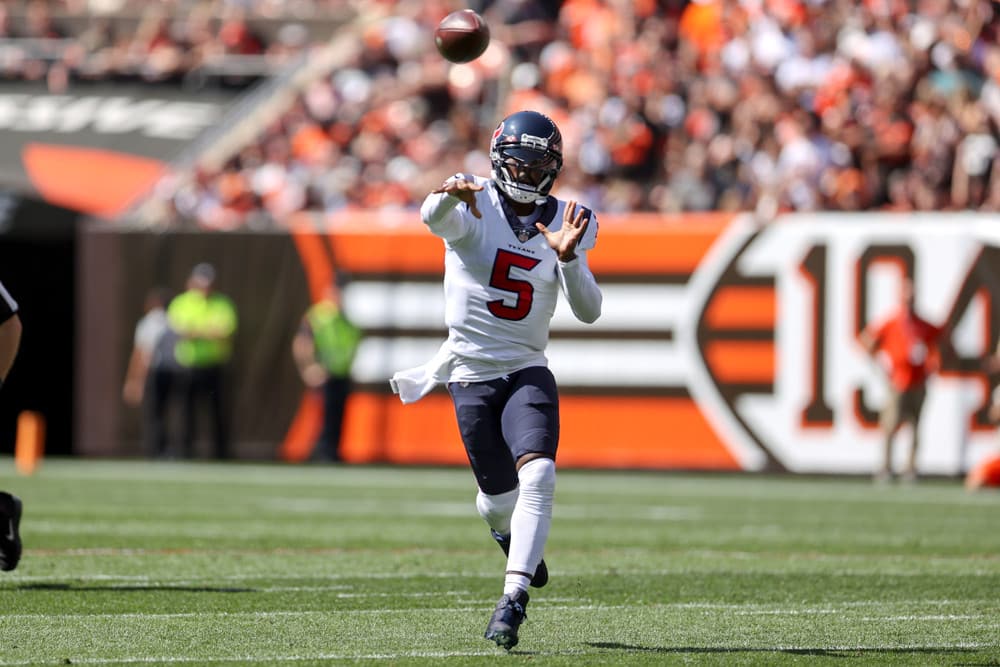 Welcome to the new top 10 weekly DFS stacks article where I will be breaking down the DraftKings main slate to identify my top 10 DFS stacks for Week 9. Stacks in DFS can be defined as; playing two or more players from the same team in a single lineup. Stacking in DFS contests has become the predominant roster construction strategy particularly for GPP tournaments, with a variety of unique and creative ways to build stacks and maximize your scoring upside each week. The most popular stacking options include the skinny stack, the double-stack, the run back stack, and the full-on game stack, and the running back paired with a defense stack.

Lamar Jackson is currently averaging the second most DraftKings’ points, yet is only the fifth-highest priced quarterback on the Week 9 slate. Blows my mind. In the past Lamar naked was typically the best play, but with the emergence of Marquise “Hollywood” Brown and a priced down Rashod Bateman, stacking Lamar might be the best play this week. The Ravens are 10-3 coming off their bye week under John Harbaugh and should need to keep the peddle to the metal if they are going to outpace the Minnesota Vikings offense.  Consider this a strong Cash game play and the building blocks for smaller GPP tournaments.

According to RunTheSims.com, Josh Allen ($8,200) has the second-highest ceiling this week when he faces the 1-6 (worse than their record indicates) Jacksonville Jaguars. The Vegas line is currently -14.5 for the massive road favorites, who initially looked sluggish last week against their division rival Miami Dolphins. I don’t foresee the same issues this week against Urban Meyer and the Jags, who rank 26th against both quarterbacks and wide receivers.

Each week they give up 60 points on average and Josh Allen and the Bills’ receivers are an above-average bunch, averaging over 47 DraftKings points per game. Stefon Diggs ($7,700) found the end zone last week, while Cole Beasley ($5,400) racked up 10 catches on 13 targets for 110 yards. Wheels up this week! I’m loading up on Allen & Company this week in larger field GPPs and multi-mass entry (MME) formats. The Bills are one of the most explosive stacks in Week 9 and could help you cash in big in your DFS contests.

Derek Carr ($5,900) has been a value all year and enters Week 9 as the eighth highest-scoring quarterback on the DraftKings main slate. His top two targets, Hunter Renfrow ($4,800) and Darren Waller ($6,200) are priced down coming off the bye week. The great news for us is they are facing a New York Giants’ defense that gives up a combined 50 points to the wide receiver and tight end positions each week. Hunter Renfrow has a 21% target share, which will only increase, given recent events. Darren Waller is back this week and should see at least 10 targets in this matchup. This is a great opportunity to pay down for a cheaper stack and load the rest of your team for upside.  I love this stack in all GPP contests.

Joe Burrow ($6,800) is currently third in the NFL with 2o passing touchdowns, behind only Tom Brady (25) and Matthew Stafford (22), neither of who are on the DraftKings Week 9 main slate. Burrow is on the slate and he might secretly be the play of the week. His opponents, the Cleveland Browns have been lit up by any quarterback not named Ben Roethlisberger this season.

The Browns defense ranks 27th, giving up close to 21 points per game to opposing single callers. They have also given up nine touchdowns and over 1,360 receiving yards to wide receivers. Don’t let Ja’Marr Chase‘s $7,600 price tag deter you, it’s the best skinny stack with the most upside this week. Running it back with a criminally underpriced and often used Jarvis Landry at $5,100 is a no-brainer. Landry has the top point per dollar value this week according to RunTheSims.com. I almost feel guilty not running it back with him. This is a Cash or GPP stack.

The centerpiece of this run-back game stack is Hollywood Brown ($6,000), whose 12.25 optimal rate is top five this week according to RunTheSim.com. The Ravens defense has been terrible against the tight ends this year, ranking 32nd and giving up close to 20 points per game. Tyler Conklin is priced at only $3,00o making him a great punt play and addition to our Adam Thielen ($6,900) stack. Thielen with a top 10 PFF matchup keeps us in the game and this stack alive all game. I’m playing this stack in large GPP fields and surrounding it with high-leverage/high upside plays.

Austin Ekeler ($7,900) is leading all DraftKings running backs on the Week 9 main slate with 22.5 points per game. Justin Herbert ($7,000) is battling a right-hand injury, but it looks like he should be good to go for Sunday. It’s hard to predict whether Mike Williams or Keenan Allen will be the number one wide receiver from week to week, but Austin Ekeler and his receiving role is locked into the offense. Ekeler has seen 27 targets in his last four games and has five performances over 22 points this year, two of which went for over 30 points.

Devonta Smith ($5,200) wasn’t needed last week, with Jalen Hurts only passing the ball 15 times all game. This week the Eagles and Hurts should be playing catchup or engaged in a back and forth points scoring bonanza. Look for Smith to see six to eight targets this week. I’m comfortable playing this stack in Cash and GPP. That is not something you can say about all stacks in DFS for Week 9.

Can Patrick Mahomes ($7,800) bounce back? Matthew Berry, “Doesn’t love it…but he’s surrounded by talent and he has one of the best offensive minds in the game behind him.” Despite Mahomes’ recent struggles, he still averaging over 24 DraftKings points per game this season. This week the Chiefs are home favorites over the Aaron Rodgerless Green Bay Packers.

Mahomes and his offensive line will have a plus matchup this week according to PFF. This means that Mahomes should be able to bounce back and find the end zone more than just once. Tyreek Hill ($7,900) was targetted 18 times last week and is tied for first in targets with Cooper Kupp at 90.

Aaron Jones ($7,200) is the most likely candidate to see increased passing volume, particularly on designed screens plays. Jones is currently averaging five targets per game but had a season-high 11 last week. I’m primarily leaning on this stack in Cash games based on the cost.

Over his last four games Patrick Mahomes is QB20. How worried should you be? What should you do? pic.twitter.com/qRoBFZPQtW

Apparently, the computer models love a $5,600 Daniel Jones with week. And what’s not to love? I mean besides almost all of his weapons being injured and no Saquon and all. With Kenny Golladay trending the wrong side of questionable, it looks like this week will be all Kadarius Toney ($5,200) all the time. The New York Giants are road underdogs which means the game script will look like him passing and rushing for his life. The Hunter Renfrow runback is based on his cheap $4,800 price tag and his projected increased usage in the passing game. I’m primarily targeting mid-sized GPP tournaments with this stack, using it to gain leverage over the field. Jones and Toney could be one of the best stacks across all DFS stacks in Week 9.

The Atlanta Falcons have given up close to 1,00 total yards and eight touchdowns to running backs through seven games. Alvin Kamara ($8,200) is averaging over 20 DraftKings points per game this season. He’s arguably the best running back play in the slate given his passing role and overall volume of touches.

The New Orleans Saints ($3,700) lost their starting quarterback last week and still beat the defending Super Bowl Champs and Tom Brady with Trevor Simeon. This week they face an Atlanta Falcons teams that only manage 334 yards per game each week and will be without Calvin Ridley for the foreseeable future. The Falcons are six-point road underdogs and have one of the lowest implied team totals with just 18 points. Paring with Alvin Kamara is just a good business decision in Cash.

The Miami Dolphins vs. The Houston Texans is the battle of the 1-7 teams!! These teams are gross, but sometimes making money is dirty work. Tyrod Taylor is trending towards playing this week and priced at only $5,800, he’s worth stacking with moderately priced Brandin Cooks at $6,100. Cooks has 70 targets this year is averaging 16 DraftKings points per game. The Myles Gaskin runback is because Houston has been terrible against running backs, giving up 10 total touchdowns and over 1,250 total yards. This stack is primed for GPP large tournament glory and stands out for value among all the Week 9 DFS stacks!