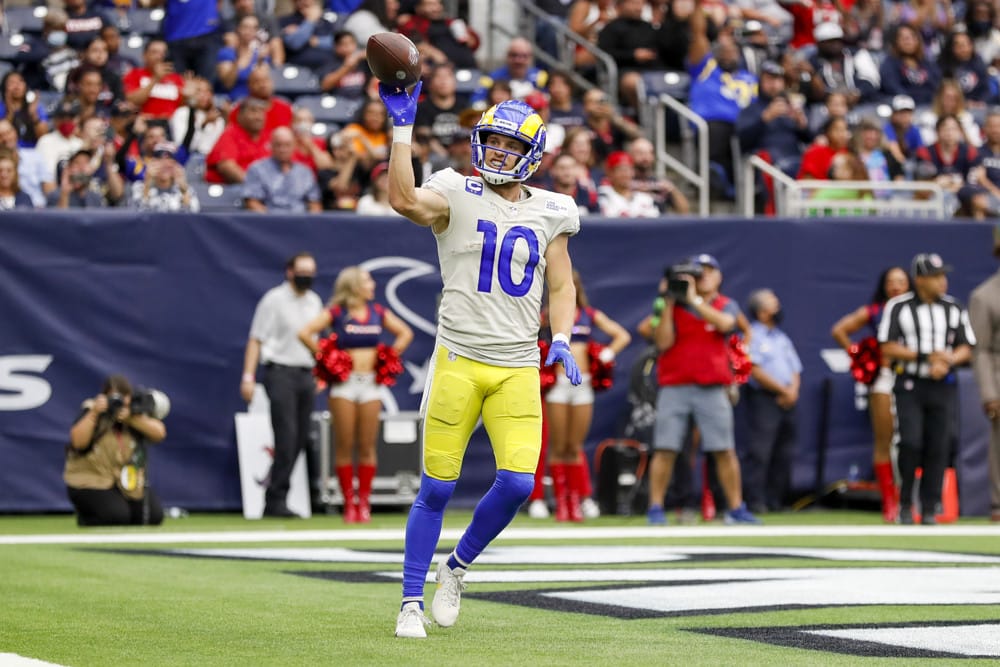 The midseason point of the 2021 NFL Season is upon is, which means the fantasy playoff race is heating up. Whether your squad is sitting at the top of bottom of the standings, these fantasy football awards likely have something to do with it. From MVPs to busts to injuries, I’ll be breaking down what we’ve seen so far, and predicting what we might seen in these coming weeks.

This should come as no surprise to anyone. Derrick Henry is the best player in Fantasy Football hands down. While many of Derrick Henry’s fantasy managers are surely crushed to hear his latest injury diagnosis, let’s take a look at what he’s done so far. Before his foot injury Henry had 10 touchdowns in 8 games. On top of that he was averaging 117 yards per game totaling 24.2 points per game. His 193.3 fantasy points rank third only behind Cooper Kupp, and Tom Brady. This may make some wonder why Henry and not Kupp? This is for the sole reason that wide receiver tends to be a deeper position where each team has three versus one or two at running back. For that Henry is our MVP.

Cooper Kupp has been down right amazing this year. While just about everyone knew who Cooper Kupp was heading into this year I don’t think many of us predicted this. Last season Kupp finished at WR 34 with 116.7 total points and 7.2 points per game. Flash forward to this season and Kupp has already nearly doubled his output from last year. His 115.5 YPG and 10 touchdowns thus far give him a 37.1 point lead on WR2 Tyreek Hill. These kinds of numbers just about overtook Henry for MVP and made him a clear favorite for breakout of the year.

Here’s another fantasy football award which should not come as too much of a shock to many. Chase is the clear frontrunner for NFL Offensive Rookie of the Year and he also is for this award. Burrow and Chase are once again tearing up the field like they did at LSU. So far this year Chase has 7 touchdowns and is averaging 98.3 YPG on 4.8 receptions per game. Ja’Marr shows no signs of slowing down and looks like he’ll be a perennial first or second round pick for years to come.

For those who drafted Christian McCaffery number one overall the first two weeks went off without a hitch. He scored 52.4 points combined and his receiving numbers were off the charts with 14 receptions for 154 yards. As everyone knows at this point,  McCaffery would go down in week 3 on Thursday night football, sidelining him for the last 5 weeks. This was crushing to all who took McCaffery first overall as they likely had to scramble to replace him with backup Chuba Hubbard. Hopefully we’ll see McCaffery back out on the field this Sunday.

Heading into the season, if I told you the Atlanta Falcons had a top 10 fantasy running back you probably would have thought Mike Davis. Yet, at the midseason point Davis has failed to live up to expectations and Cordarelle Patterson is tearing it up. Patterson has been able to stand out specifically in the passing game with 5 touchdowns, 47.6 yards and 4.6 receptions per game. In addition to that he’s also found some limited success on the ground with 38.3 YPG and 2 touchdowns. All in all these numbers put him at 33rd in the league in terms of total fantasy fantasy points, the highest out of guys who may have gone undrafted in your league. If you were able to snag Patterson off the waiver wire this year, it’s certainly paying off, as he is an every week starter and a deserving recipient of this fantasy football award.

Cordarrelle Patterson now has SEVEN touchdowns on the season.

And many other stars. Wild. pic.twitter.com/5JSOaBcoTS

If you’re an Allen Robinson fantasy manager, I think you’ve officially hit the point where it is safe to drop him. After failing to be traded on Tuesday’s deadline, I don’t know if he can turn it around. Robinson entered the season with so much promise, with an ADP of 31 yet he’s now averaging 7.4 PPG and is currently WR60. On top of that he’s only caught 1 touchdown and is averaging 3.3 receptions per game. While I think this season is all but a wash for Robinson and his fantasy managers, I still think he has plenty left in the tank and will bounce back next year.

While the first half of this article was focused on what has happened, as Fantasy Players, we want to know what is going to happen. I’ll jump into some of my predictions for the second half of the season that could open you up to some potential league-winning trade targets.

As I mentioned before, McCaffery fantasy managers had a tough beat when he went down in Week 3. If your team was able to hang around in playoff contention in his absence, you should be feeling a lot better about a playoff push. There is no reason to expect the pace he was on before injury to slow down, barring a re-injury. While the Panthers do not have the easiest remaining schedule, 3 teams of his remaining 9 games are in the bottom half in terms of rush defense. On top of that, 5 of his remaining 8 teams to play are bottom half in terms of completions allowed. McCaffery should pick right back up where he left off and once again finish in the top 3 of running backs in PPG.

Don’t look now but Michael Pittman is a rising WR1. In the last two weeks he has put up a combined 51.1 points and I think he’s here to stay. As we all know Carson Wentz has a tendency to find his guy and feed him the ball (i.e. Zach Ertz in Philadelphia) and I think Wentz has found his new Ertz. Pittman is a big red zone threat and has found the end zone 4 times in his last 4 games. With two matchups against the Jaguars and one against the Bucs, Texans, and Jets he has a pretty favorable remaining schedule. I expect Pittman to solidify himself as a WR1 and finish in the top 10 of all WRs this year.

I think we officially saw Michael Carter’s breakout game last week. While many had been stashing Carter on their bench for the last few weeks, that should change soon. Since the change from the injured Zach Wilson to Mike White we’ve seen Michael Carter catch 8 and 9 passes in two straight games. If we see this kind of production continue under White, Carter could certainly find his way into the RB2 conversation from receiving alone. The Jets still have some pretty friendly matchups against some very bad defenses on the schedule so look for Carter to see a big uptick in production on the ground as well.

I don’t think I have to say too much here. The potentially season ending injury  to Henry is an absolute crusher to all who had him. If those guys can’t find a viable backup in guys like Jeremy McNichols or Adrian Peterson, they could be in trouble.

There is no doubt that a massive void has been left in the Titans backfield for Peterson and McNichols to fill. While we don’t know how much is still left in Peterson’s tank, we know a bit about McNichols. He’s received 27 targets so far this year for 203 yards and 1 touchdown through the air. Additionally he’s taken 7 handoffs for 38 yards. Expect McNichols to see an increased role in the pass game that could vault him to an every week starter. In terms of Peterson, there is enough work to additionally make him a starter; it really just depends what he has left. If either guy is available in your league they are must-adds.

This was another easy one. Thomas is officially done for the year after a setback to his ankle injury. With an ADP of 77 this has got to be pretty disappointing to all those who took a shot on him hoping for a second half explosion.