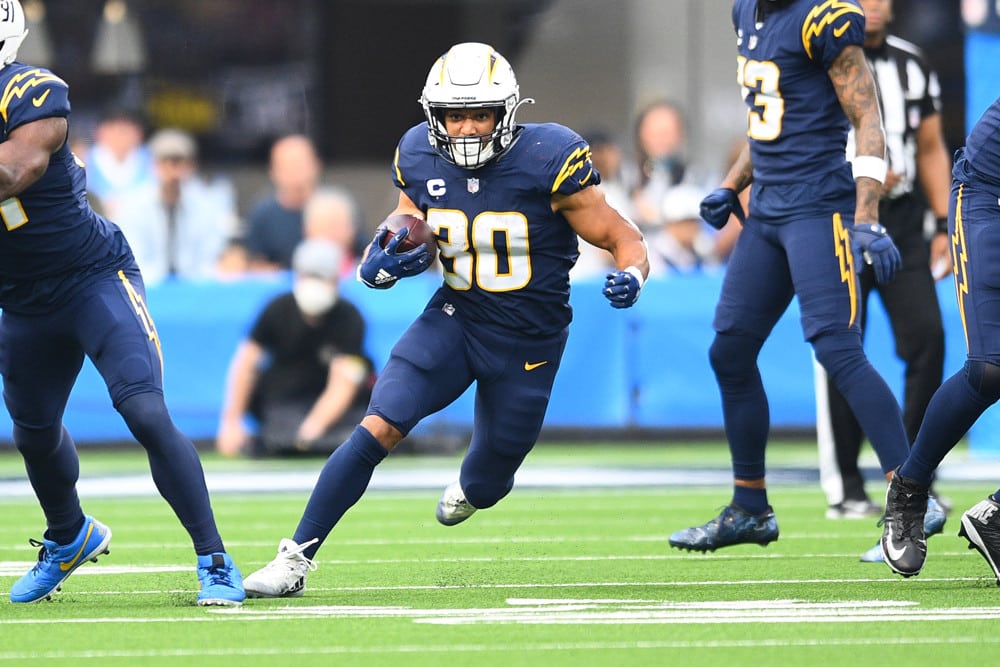 Eight weeks are completed and the playoffs are fast approaching. Maybe you’re right on the outside looking in and need some help. What moves should you be looking to make to ensure you can win enough games to make it? How do you know which players to target? Try this Fantasy Football Trade Value Chart to help make your decisions!

What is a trade value chart you ask? Our methodology takes FantasyPros Rest of Season Rankings and average points per game. After that, consider points above replacement level player and average draft position. Is that it? No that’s not it! Finally, we tweak the numbers ever so slightly to make sure it all makes sense. So without further ado here is everything you need to start grinding through the last weeks before the playoffs and to help win your league.

The quarterback group stays fairly consistent from last month’s list. Compared to last month’s, Justin Herbert fell out of the top 5 and Lamar Jackson steps in, rising to 4th. The top 5 consist of Josh Allen, Kyler Murray, Tom Brady, Lamar Jackson, and Patrick Mahomes. Just outside the top five are Matthew Stafford, Dak Prescott, and then Justin Herbert. While some may think Aaron Rodgers is appearing too low on this list he is only averaging 19.7 points per game. Allen leads QB’s with 27 points per game. Consider using the fantasy football trade value chart to package a top QB with a medium skill position to get a better-valued skill position player and a lower-valued QB like Justin Herbert who is still averaging 22 points per game.

The news hit on Monday that Derrick Henry would have surgery on his injured foot and it would keep him out 8-10 weeks. Since this most likely causes him to miss the rest of the fantasy football season and playoffs he has fallen far down the list. Maybe you had Henry on your roster and you need to make some trades to make up for the production lost. The top three running backs stand quite a bit above the others starting with Austin Ekeler, Jonathan Taylor, and Dalvin Cook. Ekeler is averaging the most points among running backs at 19.5 in half PPR leagues. All three could be mixed around in places 1, 2, and 3, though Ekeler and Taylor are scoring slightly more on average. The next set of running backs include Ezekiel Elliot, Alvin Kamara, Najee Harris, and Aaron Jones. One of the biggest movers was Elijah Mitchell, who jumps from trade value of 11 to 21. He is currently averaging 13.3 points per game as the 49ers continue to lean on him.

While the receiver portion of the fantasy football trade value chart shifted some players around from last month, Cooper Kupp, Davante Adams, Tyreek Hill, and Deebo Samuel remain in the top 5. Joining them is none other than the electric rookie Ja’Marr Chase as he is averaging 17.5 points per game. Kupp’s value is far beyond the other receivers with his league-leading 22.9 fantasy points per game.  There is also a big trade value drop after Chase. Using the fantasy football trade value chart you can see what mid-level guys might be easier to grab but still put up good points such as Marquise Brown’s 15.9 average.

This route by Cooper Kupp is nasty 🤧

The tight-end portion of the fantasy football trade value chart shows Travis Kelce remains at the top. However, there have been some changes behind him as Darren Waller falls two spots due to some mediocre outings and an ankle injury. During that time, Kyle Pitts rose to number two as he continues to have a huge target share. Over the past four weeks, Pitts has averaged 21% of the target shares and 86 yards per game. Another player producing more over the past month has been Mark Andrews, who jumps to third on the tight end list. Andrews is averaging 23% of the target share and 82 yards over his last 4 games.

Kyle Pitts is showing out!

So how do you best utilize the fantasy football trade value chart? Let’s look at a live example from one of my leagues where I see a team sitting at 4-4 is two games behind the last playoff spot. Their highest valued players are Tyreek Hill (trade value 51) and Alvin Kamara (52). They do have some WR depth behind Hill with Robert Woods (20), Claypool (20). Maybe Hill’s almost boom or bust weeks have cost them a couple of games.

Now Let’s say they are confident in those players behind Hill, but need to add some depth behind Kamara with the only depth behind him of Josh Jacobs (16). Looking at the teams in the league, they could use this chart to take Hill’s value of 51 and offer a trade to acquire somebody like Elijah Mitchell (21) and Courtland Sutton (20).  Will Sutton make up for the loss of Hill? Maybe not, but if the goal is to improve RB depth and there is trust in Woods/Sutton to do enough, then the trade could be beneficial.

Another example in the same league would be taking Hill and requesting Cordarelle Patterson (22) and Chris Godwin (27). For average points per game, you lose an average of 4 points per game at the wide receiver position and gain 3 at the running back position. These are just two examples of how to try and use the values in the fantasy football trade value chart to help make changes on your team if your current roster isn’t working for you.