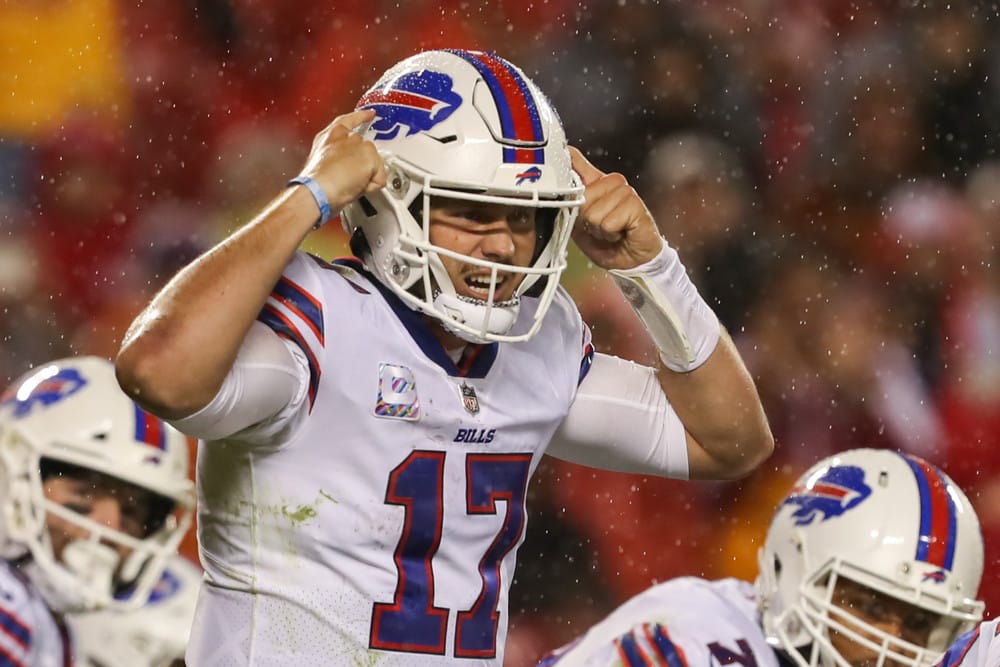 Welcome to the new top 10 weekly DFS stacks article where I will be breaking down the DraftKings main slate to identify my top 10 DFS stacks for Week 8. Stacks in DFS can be defined as; playing two or more players from the same team in a single lineup. Stacking in DFS contests has become the predominant roster construction strategy particularly for GPP tournaments, with a variety of unique and creative ways to build stacks and maximize your scoring upside each week. The most popular stacking options include the skinny stack, the double-stack, the run back stack, and the full-on game stack, and the running back paired with a defense stack.

The skinny stack is traditionally a quarterback paired with a skill position player. The double-stack includes the quarterback and two skilled position players. The run-back stacks normally consist of a quarterback and wide receiver from one team and an opposing wide receiver. A game stack can include up to five players from a single contest and include a 3/2 or 4/1 team ratio, and typically involves the quarterback. The running back stacked with a defense is just that. Each week the stacks in the top 10 will include a variety of these stacks based on the scoring upside and likelihood of cashing.

Josh Allen is the only quarterback to score two DraftKings QB1 performances this season, scoring 40 points in Week 2 and 32 points in Week 6. He has the highest optimal rate of any quarterback on the slate this week. His running mate Stefon Diggs is averaging 1o targets a game and has a favorable matchup against PFF’s 68th best cornerback in Byron Jones this week. Cole Beasley came out of hibernation last week to score 21.8 DraftKings points, hauling in seven of nine for 88 yards and a touchdown. He has a similar RunTheSim.com projection to Emmanuel Sanders but is priced $500 cheaper.

Josh Allen and Stefon Diggs talked through one route a few times today before getting right.

Diggs then helps practice squad TE Kahale Warring, who was off with Allen on same connection.

This week the Buffalo Bills are favored by 14 points at home against the hapless 1-6 Miami Dolphins, who have given up 207 points, second-most in the NFL. The Bills have shown a propensity to keep their foot on the gas peddle, even in blowouts, averaging 69.8 plays per game. This is a GPP stack with a slate-breaking upside.

According to RunTheSims.com, Matthew Stafford, Darrell Henderson, and Cooper Kupp have the highest QB/RB/WR projection and ceiling in Week 8. Stafford is averaging 25 DraftKings points per game, which is good for the sixth-best through the first seven weeks. Stafford ($7,600) hasn’t finished as the QB1 yet, but he has finished as the QB2 twice, each time scoring over 30 DraftKings points. Darrell Henderson ($6,500) is licking his chops to face a Houston Texans defense that has given up the most rushing yards (890) so far this season. Cooper Kupp ($9,000) has been spectacular, leading all NFL wide receivers in targets, receptions, receiving yards, and touchdowns.

Highest Passer Rating in the 2nd half:

The Texans on the other hand have earned their “worst team in football” title, giving up 31 points both of the last two weeks while only averaging four points themselves. This should be a blood bath from start to finish. I’m comfortable using this traditional double stack in both Cash games and GPP tournaments.

Tom Brady and Mike Evans might not be on speaking terms after Evans gave away his 600th career passing touchdown. Thankfully Tom had a loose Bitcoin laying around. This Week Evan is priced at $7,000 with Antonio Brown trending OUT, it’s all systems go. BTW. The Saints’ secondary is giving up 38 points per game. Stacking Evans with Rob Gronkowski if he’s back this week, at only $4,600, is the smart play based on Gronk’s seven targets per game and four touchdowns.

We love it too, @TomBrady. pic.twitter.com/WdWrpmMEiF

Running this game stack back with Alvin Kamara maximizes your upside and has a 20.5% optimal rate according to RunTheSim.com. It’s a great GPP play with tremendous upside. I am comfortable rolling it out in 50/50 contests as well.

My favorite Game Stack of Week 8 can definitely be found in the Indianapolis Colts vs. Tennessee Titans matchup. The Vegas Books set the game total at 47.5 and the public quickly bet it up to 50.5. After scoring 21 points last week, Carson Wentz is priced at $5,700 and is facing the 27th rank defense against quarterbacks. With a reasonably priced Michael Pittman at $5,300, it’s value a run back game stack to pair with the priced up Derrick Henry at $8,900 and A.J. Brown at $6,900.

The Tennesse Titans may have shocked the world when they stomped the Chiefs in Week 7, 27-3, they still rank dead last against wide receivers, giving up 10 touchdowns and over 1500 yards. On the other side, the Colts’ defense has given up 11 touchdowns and over 1150 receiving yards to wide receivers. I’m stacking this game in Cash and GPPs, but I’m favoring it in Cash.

This is my favorite Skinny Stack. Joe Burrow is tied for fourth with 17 touchdowns passes and Ja’Marr Chase is tied for fourth with six of those. The LSU duo is second to only Tom Brady and Mike Evans for the most combined quarterback/wide receiver points with 306. The Bengals are favored by 10 points with a 26.25 implied team total. Joe Burrow has been unstoppable when targeting Chase. He’s averaging 21.5 yards per reception and has 754 yards, which is over 100 yards per week. I’m playing this in both Cash and GPPs.

Lamar Jackson is so different than Joe Burrow in so many ways, and the way he handles success is one of them. Glad to have our guy. https://t.co/ixnexmtJi0

D’Andre Swift is the leading fantasy point producer in the Detroit Lions offense with 137 points on the season. He’s looked electric of late,  scoring over 22 points in three of his last five performances. The 48.5 total foreshadows lots of opportunities for Swift to rack up PPR points out of the backfield. On the Eagles’ side of the football, Jalen Hurts has been Mr. Consistent, his lowest point total of the year being 23.9. Hurts has massive upside against a Detroit Lions’ defense that gives up close to 29 points per game to quarterbacks. Devonta Smith has 53 targets on the year, but he’s yet to find the end zone since his Week 1 debut. The Lions defense ranks 21st, giving up over 37 points per game to wide receivers. This game has the potential to be his coming-out party. I’m playing them in GPP and Cash.

This is my favorite Double Stack of the day for GPP with a huge upside at a low price.  The Washington Football Team gives up close to 27 points to a game to quarterbacks, which is dead last in the league. Great news for Teddy Bridgewater who is getting Jerry Jeudy back this Week. Even better news, Bridgewater is priced at $5,400, Sutton $6,400, and Jeudy at $4,900. Did I mention that Washington also ranks 31st against wide receivers, giving up over 45 points per game? This is a smash matchup for Denver and the value stack you need to build a strong overall lineup for Cash games and GPPs.

The very rare, quarterback/running back stack with a running back bring back. Say that three times fast at the next family gathering. It will be a huge hit. This double running back attack is based on the 52 combined fantasy points both the Chargers and Patriots give up to running backs each game. Both offenses have measured rushing blocking advantages according to PFF, with the Patriots having the best matchup out of any this week. I’m rolling with this unusual stack because Harris has scored over 20 DraftKings points in back-to-back weeks. Playing this lineup in Cash makes the most sense.

The New York Jets rank dead last in the NFL against running backs,  11 touchdowns, and over 1150 yards combined rushing and receiving. Joe Mixon paired up with a strong Bengals defense that ranks 9th against the quarterback giving up less than 17 points per game. With Mike White poised to make his first NFL start, the Bengals defense will be very popular, but not many folks will think to pair them up. Since they are both close to 10% optimal plays, I really like this in cash and if you wanted to add Burrow and Chase to create an Onslaught Stack, I can understand why. The Jets are, were, and always will be bad. As Will Ferrell says in Anchorman, “It’s Science.”

The Game Stack on the list without a quarterback, D.J. Moore is the only wide receiver Sam Darnold has been able to find this season.  Moore has 73 targets, good for 10 per game, and a 12.7 optimal rate this Week according to RunTheSims.com. The Atlanta Falcons give up 39 points per game to wide receivers which means that Moore has GPP upside at $7,200. Offensively, Cordarrelle Patterson has been a revelation in Atlanta, averaging 19.3 DraftKings points per game. According to RunTheSims.com, Patterson has a 42.5% Boom rate this week in a game with a 46 point total. I’m favoring this stack for GPP tournaments.