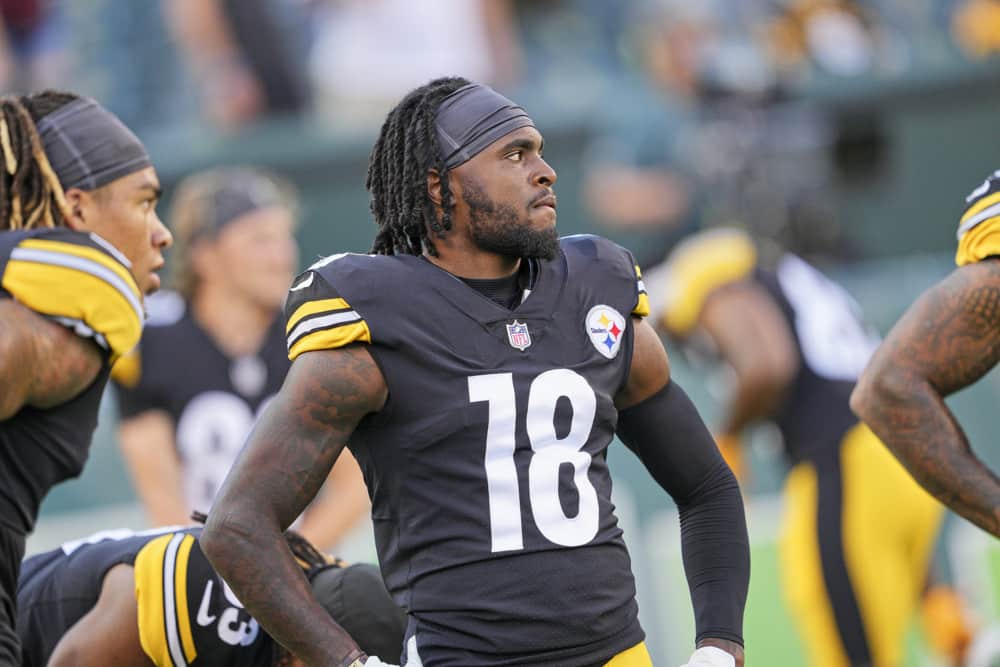 Playoffs!?  You want to talk about the playoffs?  Yes!  We do!  Playoffs are only 6-7 weeks away depending on your league playoff structure.  It’s time to look at the fantasy football playoff strength schedule!  You need to know if your roster has an easy couple of weeks or a tough slate.  Do you roll with who you have or dive into the waiver wire?  Do you make a trade that surprises the league now, but pays off in the playoffs?  Just as Rod Villagomez states on the SGPN Fantasy Podcast, it’s time to play chess while your league plays checkers!  These numbers are all slated to change with injuries, team performances, and break-out games.  However, as of week 8, this is a list of players with good and bad matchups.

Before we dive completely in let’s talk a little about the methodology of determining the numbers.  A team’s rank against a position is not determined necessarily by how good that defense is.  Instead, it focuses on fantasy points scored against.  For example, nobody is going to argue the Jets have a stellar defense.  However, they are giving up an average of 20 fantasy football points to wide receivers, which is ranked 5th best in the league.  It is also important to consider that four teams have bye weeks in week 14. Which happens to be the start of playoffs in some leagues.  This automatically knocked all their offensive players down the list because it’s a guaranteed 0 points for week 14.  When finding the strength of schedule we took the four teams a specific skill-position plays against.  We then take the sum of their opponents’ rank and then divide it by 4.  The bigger the number the better.  Bye weeks were ranked as a number 1 strength.

Here’s a quick example.  When looking at QB defensive rankings the Dolphins have a bye week 14, then play the Jets (9th ranked for fewest fantasy QB points allowed), Saints (24th ), and Titans (26th).  Adding the rankings, 26, 24, 9, and 1 for the bye equals 60.  Divide by 4 and their strength of schedule rating for quarterback is 15.  Which lands them exactly in the middle of the pack as the 16th ranked team on the fantasy football playoff strength schedule.

The best-ranking team for QB points weeks 14 through 17 is probably not a QB you’re depending on.  The Jets face the Saints (24th ranked), Dolphins (30), Jaguars (23), and Bucs (25).  Since you probably didn’t make it to the playoffs on the back of Zach Wilson (and for now Mike White) we have to look at the next four teams.  The Steelers are next on the list, with a strength of schedule rating of 22.5.  Facing three of the bottom teams (Titans, Chiefs, and Browns) do you trust big Ben Roethlisberger to navigate your playoff team?  If not, maybe the next three are a little more trustworthy as Ryan Tannehill has a rating of 22.  Next is Dak Prescott with a rating of 20.5.  Last among the top QB schedules are Jalen Hurts and Derek Carr, who are tied at 20.25 on the fantasy football playoff strength schedule.

With good comes bad, so which QB’s have the toughest schedules on our fantasy football playoff strength schedule?  The toughest, with a rank of 7, is Carson Wentz.  Wentz starts with a bye and then goes on to face the 6th ranked team as far as QB fantasy points is concerned, the Patriots. Then, his Weeks 16 and 17 include matchups against the Cardinals (2) and the Raiders (19).  If you have Jared Goff he probably didn’t help you to the playoffs, ranking as the 23 fantasy football QB.  But if injuries force you with no other options the fantasy football playoff slate won’t get any better as he is tied with the 2nd hardest schedule.  With a strength rating of 9, he is tied with the guy that sits in his former seat, Matthew Stafford.  Stafford has been great, ranking as the 2nd best fantasy QB.  But he faces the Cardinals (2), Seahawks (19), Vikings (5), and the Raiders.  The next two QB’s with tough schedules are Baker Mayfield with a rating of 10.25.  He’s followed by Kirk Cousins with a rating of 10.75 on the fantasy football playoff strength schedule.  Just what you need, another Kirk Cousins playoff disappointment.

The next position groups are a little tougher.  Consider if the team has a shared backfield or spreads the ball around a lot of passing.  However, the best running back rating on the fantasy football playoff strength schedule at 25.75 is the Falcons.  Is that better news for Mike Davis or Cordarelle Patterson?  Since Patterson has outpaced Davis so far this year, I would lean his way as they face the Panthers (24th against the run), 49ers (27), Lions (21), and Bills (31).  The next two backfields have a clear front runner and Najee Harris shows the 2nd best schedule at a 24 rating.  The Steelers play the Vikings (15), Titans (21), Chiefs (32), and Browns (28).  These teams combined together to allow an average of 21.83 fantasy points to running backs a game.  Next on the list is Joe Mixon and the Bengals with a rating of 22.5.  Tied for 4th best schedule Austin Ekeler and Leonard Fournette both have positive matchups and a strength rating of 21.

The hardest fantasy football playoff strength schedule for running backs belongs to Saquon Barkley with a rating of 7.75.  Barkley can’t catch a break. Especially through his injuries and playoff schedules, facing the Chargers (7th ranked), Cowboys (8), Eagles (14), and Bears (2).  Another team you may want to avoid is the Lions backfield.  Though it would be hard to sit D’Andre Swift, he has a strength rating of 8 as he faces two top 5 teams weeks 15 and 17.  Next is Dalvin Cook with a strength rating of 9.25.  Then the Cardinals duo of Chase Edmonds and James Conner and Seahawks running back (Chris Carson or Alex Collins) are tied for 4th hardest at 9.75.  Nobody is expecting you to bench your stud players like Dalvin Cook.  However, take this as a warning that it may be tough sledding in the playoffs.  You may need to rely on other players to pick up the slack.

The best wide receiver fantasy football playoff strength schedule rating belongs to the Pittsburg Steelers with a rating of 23.75.  This means you can count on Diontae Johnson, who currently ranks as the 22nd best wide receiver in half PPR.  In week 17 he faces the Browns (30th ranked), a team that he just put up 6 catches for 98 yards on.  Tied for 2nd best schedule at 23.25 are the Titans and the Raiders.  Finally putting up the numbers you’ve been waiting for, A.J. Brown should help you through the playoffs as well.  With the recent news, maybe you were able to get Hunter Renfrow or Bryan Edwards.  And now they may be able to help you through the playoffs.  The Texans have the 4th best schedule with a rating of 22, and despite inconsistent QB play and a lack of offense in general Brandin Cooks ranks as the 20th in half PPR league points.  Last, you wouldn’t dare sit Deebo Samuel, and luckily you won’t be tempted to as he has the 5th best WR schedule with a rating of 20.75.

Facing a top 5 defense for wide receiver fantasy points, Terry McLaurin has the worst strength rating of all positions with 3.5.  He faces both the Eagles (4th ranked) and the Cowboys (3) who are allowing just over 19 fantasy points per game to wide receivers.  He’s a hard name to bench but has some awful matchups and should be approached with caution.  The Giants are next on the list with a rating of 6, but you probably aren’t counting on Sterling Shepard to carry you to a playoff victory. Kadarius Toney is a rising player but could struggle.  The Colts have the 3rd worst schedule for wide receivers, which could make it hard to rely on Michael Pittman Jr.  The Bucs have three wide receivers who are productive in Mike Evans, Chris Godwin, and Antonio Brown, but with a rating of 9, they have a tough schedule as well.  They face the Bills (2), Saints (21), Panthers (8), and then the Jets (5).  While the last game may benefit Fournette, the receivers may not be as involved.  Last for toughest schedules are the Eagles with a rating of 9.25.  Looking at the fantasy football playoff strength schedule this means DeVonta Smith may need to stay on your bench beyond his week 14 bye.

Looking at the rest of the fantasy football playoff strength schedule, the best tight end schedule for the playoff slate belongs to Dawson Knox at 22.75.  Not far behind him C.J. Uzomah and the Bengals have a rating of 22.  If you stream kickers, kickers with a good matchup include Chris Boswell with a rating of 26.75.  The Chargers and Dustin Hopkins have the next best rating at 25, followed by Daniel Carlson and the Raiders at 24.  Defenses with a good schedule are the Jaguars at 24.75.  They finish weeks 15-17 with lower-scoring teams Texans (32), Jets (31), and Patriots (26).  While you probably aren’t starting the Jaguars defense, a couple you might be starting are the 2nd best rating at 24.75, the Chargers.  Following them is another defense worth a start at a 23.5 rating, the Cowboys.

The toughest tight end matchup on the fantasy football playoff strength schedule belongs to Gerald Everett with a 7.25 rating.  Since you probably aren’t starting the 35th ranked tight end, the 2nd worst matchup belongs to Zach Ertz and his new team.  The Arizona Cardinals land with a rating of 10.25.  That’s tied with Jared Cook who finishes against two top 10 teams when it comes to tight end fantasy football points, the Texans and the Broncos.  Vikings kicker Greg Joseph has the hardest kicking rating of 7.25, facing two top 5 teams, and Chase McLaughlin of the Browns is next on the list at 9.  The defenses with the worst schedules are the Washington Football Team with a rating of 6.5.  Followed by the Ravens (7.5) and the Panthers (8.5)