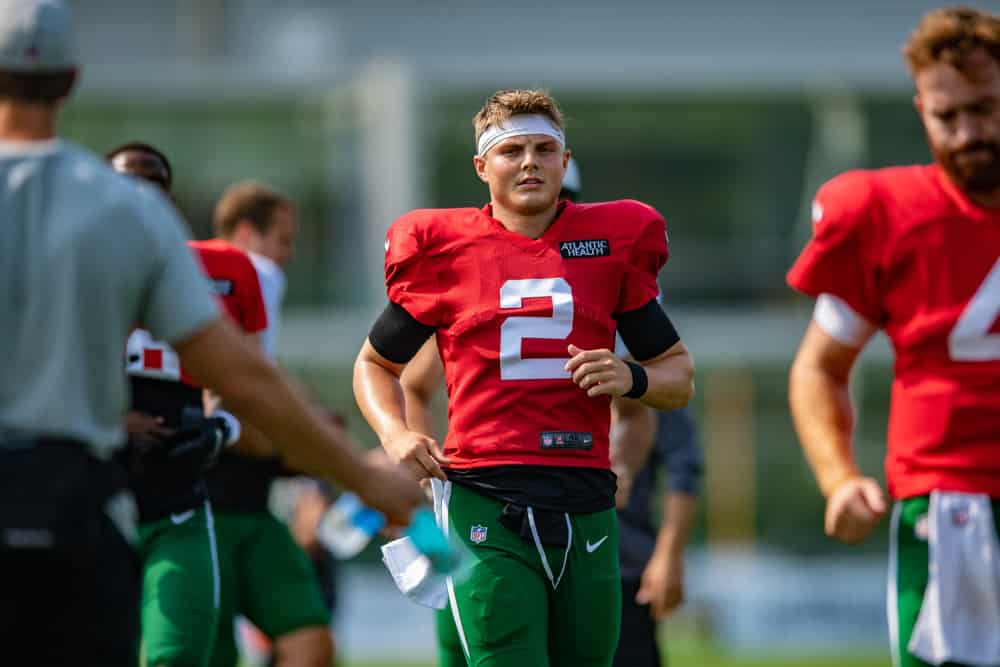 With the NFL preseason in the books, it is time to discuss which players excelled to such a degree that fantasy football owners might consider them sleepers for the NFL season. While the majority of players that I’m about to mention will still be backups, they still possess extreme upside due to their respective talents. As a result, let’s discuss some players who drastically boosted their fantasy football stock during the preseason games. These preseason risers and stars will cement your fantasy football victory this year.

After being a clipboard holder last season with the Saints, Jameis Winston returned with the hopes of being an NFL starting quarterback once again. With Drew Brees no longer on the roster, there were questions about who would become the new starting quarterback. However, all of those questions were quickly answered during the preseason due to Winston’s performance. In two games, Winston completed 16 of his 22 pass attempts for 219 passing yards and two touchdowns. As a result, he was named the starting quarterback. Even though Winston showed flashes at times in Tampa Bay, this preseason star looked extremely comfortable behind center in New Orleans which could lead to a big regular season. At QB24, he easily has top-15 potential which is why you should look to select him in the 13th-14th round. Winston has a higher ceiling than most of these preseason stars.

Since New England’s running back situation is impossible to predict, there might be some value with the talented rookie. Rookie running back Rhamondre Stevenson looked extremely comfortable in the preseason as he started to generate some fantasy football buzz. In three preseason games, Stevenson had 216 rushing yards and five rushing touchdowns. In addition, he impressed the front office to such a degree that running back Sony Michel was traded to the Los Angeles Rams. Now, Rhamondre Stevenson has some value as a handcuff and could receive a decent workload if anything happened to Damien Harris. With an ADP of 178, you can take a flyer on him in the final round of your fantasy football draft to cement your risers.

Unlike the previous two quarterbacks mentioned, Justin Fields might not be a backup quarterback for too long. Even though Andy Dalton was named the starter, most people believe that decision will be short-lived. Fields drastically outplayed Dalton during the preseason and Chicago’s offense looked better whenever the rookie quarterback was in the game. In three preseason games, Fields completed 30 of his 49 pass attempts for 276 passing yards and two passing touchdowns. In addition, he had 92 rushing yards and one rushing touchdown. Fields provides a spark to an offense that desperately needs one. As a result, I cannot imagine him still being on the bench by week five. Take a flyer on him in the 12th round due to the upside that transcends most of the other fantasy football risers.

An underrated aspect of an offense is the chemistry between the quarterback and his wide receivers. During New Orleans’ two preseason games, nobody had better chemistry with quarterback Jameis Winston than wide receiver Marquez Callaway. During the preseason, he had eight receptions for 205 yards and two touchdowns. With star wide receiver Michael Thomas projected to miss the first couple of weeks in the regular season, New Orleans was looking for another playmaker at the wide receiver position. As a result, expect Callaway to become a steady part of this offense which will lead to extra fantasy value. At WR56, he has the big-play ability to be a top-45 wide receiver which makes him worthy of being selecting in the 11th round.

This past offseason, New York secured its future quarterback with the second overall pick in the NFL Draft. That selection was quarterback Zach Wilson. After some early concerns about his performance in practice, Wilson looked extremely sharp in preseason action which gave him a bit more fantasy football hype. In two preseason games, Wilson completed 15 of his 20 pass attempts for 191 passing yards and two passing touchdowns. With a sense of calmness in the pocket and an underrated wide receiver corps, Wilson should be a bit higher than his QB27 projection. As a result, look to target him as your backup quarterback in the 14th round.

After being in Ja’Marr Chase‘s shadow at LSU, it appears that Terrace Marshall Jr. is starting to get more recognition at the next level. Marshall Jr. has been flying up fantasy football draft boards recently and it is due to his stellar play in the preseason. In three preseason games, he had nine receptions for 181 yards and one touchdown. With the departure of Curtis Samuel this offseason, the Panthers were looking for another option in the slot and Terrace Marshall Jr. appears to be the answer. In the final preseason game, Marshall Jr. had the most snaps from the slot position with the first-team which suggests that he will receive a ton of playing time during the regular season. Plus, according to Pro Football Focus, he has been the best rookie wide receiver throughout the preseason so his current WR65 projection seems very low. With an ADP of 184, he is definitely worth gambling on in the later rounds. Especially when you consider a lot of these preseason risers and stars require more fantasy football investment.

After a breakout season with the Titans last year in which he recorded 984 receiving yards and five touchdowns, Corey Davis signed with the Jets during the offseason. However, questions remained about how well he would get along with rookie quarterback Zach Wilson. Those questions were quickly answered as the two of them displayed tremendous chemistry during the preseason. In two preseason games, Davis had a team-high ten targets and 88 receiving yards. As the clear number one wide receiver on the depth chart, Davis is poised for a big season. With an ADP of 108, you should target him in the 9th-10th round. Receivers make up a lot of preseason stars and risers usually, but Davis could be a fantasy football stud.

After being selected in the second round of the NFL Draft, it was obvious that the Arizona Cardinals had plans in mind with rookie wide receiver Rondale Moore. With Larry Fitzgerald no longer on the active roster, the Cardinals needed a new slot receiver. Based on training camp and the preseason, it appears that Moore is the perfect guy to fill that void. In two preseason games, he had six receptions for 38 yards. Plus, he had three carries for 25 yards. As a result, it is safe to say that Arizona wants the ball in his hands as much as possible. With an ADP of 180, he is worth a flyer in the 15th round ahead of many preseason stars.

Even though New England brought back Cam Newton for another season, the Patriots decided to bring some youth into the quarterback group by selecting Mac Jones in the first round of the NFL Draft. While some people expected Jones to be a backup quarterback for the entire season, there is suddenly a quarterback controversy due to his performance in the preseason. In three preseason games, he completed 36 of his 52 pass attempts for 389 passing yards and one passing touchdown. To the surprise of many, Coach Belichick named Jones the starter for week one which means that you should be able to get a starting quarterback with tremendous upside extremely late in your fantasy draft. Target him somewhere in the 12th-13th round and ride one of the hottest risers in fantasy football to victory.