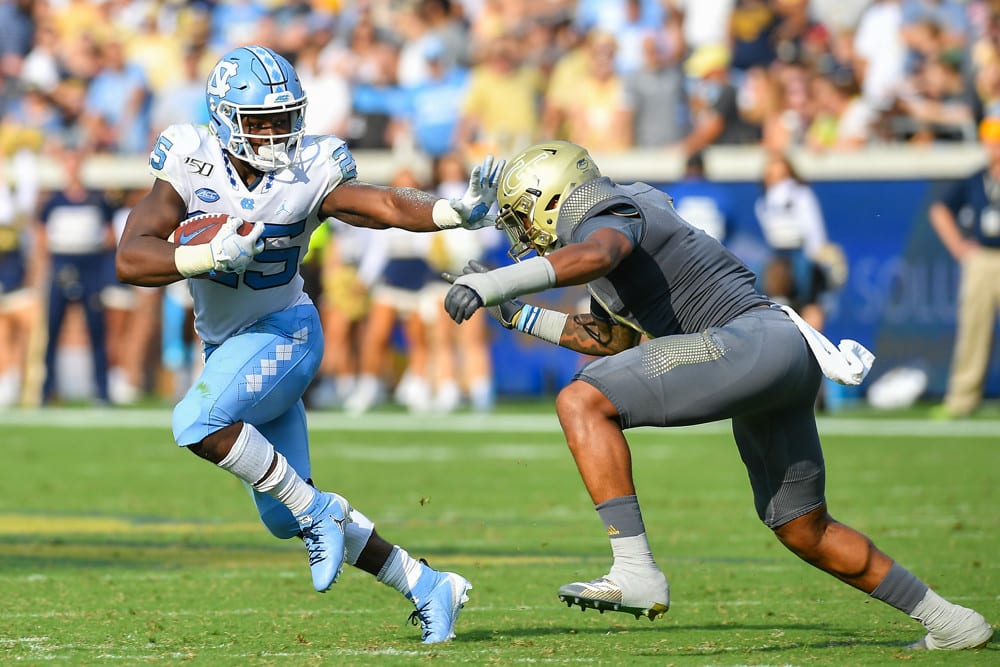 With the draft less than three weeks away it’s time to start thinking about our dynasty rookie drafts.  This is arguably the best time for the dynasty community. The hope and promise of these players coming into the NFL are huge and every dynasty owner wants to draft the next best quarterback, running back, wide receiver, or tight end. These Dynasty rookie rankings are based on pre-draft information and may change post-draft.

This offseason through countless hours of film and research I have compiled a tiered ranking system to help you through your rookie drafts. Some players could rise within a tier with a solid landing spot however these rankings should not change. Let’s take a look at the most talented players entering the draft! Like the great Marv Levy said, ” Where else would you rather be, than right here, right now!”

This tier of players is the cream of the crop, these four players are the most likely to impact your fantasy teams the most and fastest. Ja’Marr Chase is as real as real gets when it comes to receiver prospects. It’s been stated by multiple people he is the best prospect since Amari Cooper, those are big shoes to fill. However, Chase has that ability with his physicality, 4.3 speed, and game-breaking capabilities he is a cornerstone prospect for a dynasty roster.

The ability to quickly transfer horizontal to vertical movement is important for WR and DB. The long jump is a great indicator of this attribute.

Williams, Harris, and Etienne are the top three running backs in a weaker class than this past year’s. These three all hold huge potential, Williams and Harris run with more physicality than Etienne. However, Etienne has a speed gear both Harris and Williams lack. All three are capable three-down backs at the next level, as they all are good receivers and blockers. Williams will be the youngest of the group at only 21 years old, and the only Junior running back in this tier. After these three there is a significant drop off at the position.

As we enter this tier of prospects the upside is still tremendous however the gap of outcomes increases slightly. This tier includes Kyle Pitts a 6-6, 246-pound tight end who is the best tight end prospect we have seen in years. Playing in the SEC he produced back-to-back 600 plus yard seasons and 12 touchdowns this past year. We also see the first quarterback in this tier as Trevor Lawerence arrives on the scene. Lawerence is a first-round talent, as he has produced three 3,000 yard passing seasons in a row in the ACC. His combination of size, mobility, and arm talent makes him one of the best prospects we have seen in years.

We also see a bunch of wide receivers in this tier, the most notably is Devonta Smith this past year’s Heisman Trophy winner. Smith is slightly undersized at 6-0 and 175 pounds. However, he is a crisp route runner with tremendous speed, strong hands, and a huge catch radius. All of this paired with his great work ethic make it hard to not see him succeed at the next level. From one great route runner to another, Rashod Bateman is another great prospect. He had a tremendous 2019 season and then followed that up with a slightly less impressive 2020, mostly due to his multiple opt-in and outs due to covid-19.  The talent is undeniable though and his ceiling is as high as anyone in this tier.

This is the “Boom or Bust” tier, many of these players have huge upside however carry a huge chance of disappointment. Five of the seven receivers produced at least one 1,000 yard season, only Dyami Brown had two. Elijah Moore has shined the past two years on a bad Ole Miss offense while producing 2,043 yards and 18 touchdowns. He impressed at his pro-day, running a 4.3 40-yard dash and a 6.66-second 3-cone drill. His change of direction speed, route running, and contested-catch ability make for a lethal combination. This could allow him to become the next best slot receiver we see emerge.

(bottom of the screen) pic.twitter.com/hvpMy0BHvu

The running backs in this tier include Hubbard who had a down season after he produced 2000 yards as a sophomore. He possesses game-breaking speed however he does lack lateral speed and agility. He will also need to work on becoming more of a complete player if he wants to succeed. Kenneth Gainwell is the biggest wild card factor as he produced more than 1,400 yards rushing in 2019, and is a good receiving back. He was able to get to 200 pounds by his pro-day, this is a good thing as he now has the size to be a lead back in the NFL. His ceiling as a fantasy asset is high. However, he also carries a low floor.

In this dynasty rookie rankings tier we start to see a good variety of positions, will very wide margins of outcomes. Both Justin Fields and Zach Wilson were productive quarterbacks at the college level, both have great talent. Wilson steadily improved season over season, however, he did not have a 3000-yard passing season till this past year. As to Fields who produced this in his sophomore season and was on pace for it this season, however, the Covid-19 shorten season would not allow that. Both have great arm talent, this allows them to make throws on the run and while in the pocket. Pair this with solid decision making and they are two great NFL prospects as well as fantasy prospects.

Like the quarterbacks, the second and third tight end’s in Pat Feiermuth and Brevin Jordan enter this tier. They both produced more than 1,000 yards and double-digit touchdowns in college. However they’re playing styles are much different, as Freiermuth brings the physicality and blocking of a player like Rob Gronkowski. While Jordan brings more agility and elusiveness to his game, like Darren Waller. These two will not bring the upside that Pitts brings, and may need more time to really establish themselves. This should not steer you away though as they will be fantasy relevant for years to come.

In the “Senior Bowl Tier”, we see a lot of talented players with big question marks going into the NFL.  One of these players is Elijah Mitchell who has a  very wide range of outcomes, he stands at 5-11 and 218 pounds, this is great size for a lead back in the NFL. While playing in the Sun Belt he produced more than 3,000 yards rushing and 41 touchdowns. He possesses physicality and great speed as he ran a 4.38 40 yard dash at his pro-day. Mitchell will need to work on his blocking and vision issues, but he has all of the tools to become a lead back if he can pull it all together.

Trey Lance is possibly the most naturally gifted quarterback in this class. His great size at 6-4, 226 pounds, and he uses this in the run game. With this he is not afraid to throw his body around and run defenders over, this is not the best plan at the NFL level for a quarterback. This rushing ability paired with his great arm strength has many people clamoring over him. However, he is still very raw and needs at least a season to develop more, that though his upside is huge. Lance could end up being the best fantasy quarterback from this class, but he has equal chances of being the worst.

The “Dart Throw Tier” is full of guys who don’t check all the boxes as rookies but have great dynasty upside and may climb the rankings. Most of these players will be more valuable to NFL teams than fantasy rosters. With that said some of these players will be steals in your rookie drafts, Hunter Long is one of them. The hype of the big three tight ends is real but Long is everything an NFL team wants in a tight end. He stands 6-5, and weighs in at 253 pounds, he is a great blocker and receiver. His playing style does not contain flare and lacks huge plays after the catch. However, he has produced back-to-back 500-yard seasons and added 7 touchdowns in that span. Long is certainly worth a flier for a tight end needy roster.

A strong week in Mobile could help cement him as a day 2 pick in this draft class. #SeniorBowl pic.twitter.com/lKzaIKDouj

This tier also contains many 1,000 yard receivers, the one that stands out to me is Jonathan Adams Jr. He produced 1,111 yards on 79 receptions this past season in the Sun Belt. He would also add 12 touchdowns. His size at 6-3, 220 pounds fits that mold for a prototypical NFL receiver. Adams is a good contested catch receiver who can make plays after the catch as well. He is definitely worth that flier as he could burst onto the scene and become a top fantasy asset and climb the dynasty rookie rankings.

This tier of the dynasty rookie rankings is what we would call “The Sleeper Tier,” these rookies have skills to help an NFL roster for sure however they may not impact your fantasy team too much. Frank Darby is a 6-1, 200-pound wide receiver who has great raw talent. While at Arizona State he produced more than 1,300 receiving yards and 13 touchdowns. He needs to polish up his routes and work on the overall receiver game, if this happens he could become a solid fantasy asset.