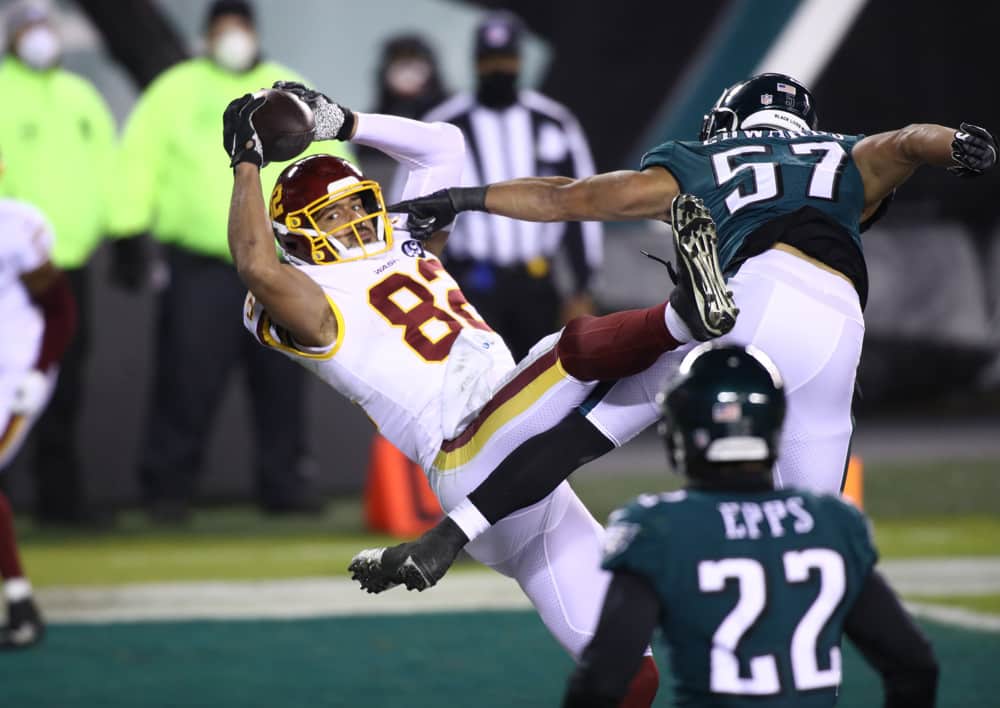 It’s a DraftKings Super Wild Card Weekend! With that in mind, there will be two articles this week covering both Saturday and Sunday’s showdown contests. So right now, get set up for the three contests happening Saturday, then, click over and prepare for Sunday’s slate. Now that season-long fantasy is completely over, it’s time to win yourself some money without the sweat of losing your head to head. Listed below are six names, two from each game, that can help you earn that cash.

As always, the players below are not meant to be considered “core.” These are simply players to consider as you are building your lineups. Play one, play them all, it is entirely up to you. My job is to help you see the reasoning behind selecting these players and how they can help you win. We wish you luck on your DraftKings Super Wild Card Weekend Showdown Picks.

All roads in the Colts’ running department run through Jonathan Taylor. Where Hines brings value is in his usage as a defacto wide receiver. Over the course of 2020, he has been a threat catching the ball from the backfield. This has resulted in him scoring double-digit fantasy points in nine games this season. The Bills defense presents a formidable challenge to Philip Rivers and his receivers. This lends itself to the need to keep completions around the line of scrimmage and hope for a sizable gain after the catch. Hines can provide that with his 7.8 yards after catch average.

Last week, he caught six of his seven targets for 50 yards. He added two carries for 17 yards to his final tally. All told he walked away with 12.7 fantasy points. If he can duplicate this kind of performance this week, he will double his value making him a solid play in your lineup.

The news on Tuesday was not positive for Cole Beasley. It is a strong possibility that the Bills will be without his services come Saturday. Also, there seems to be an issue with last week’s breakout star Isaiah McKenzie. He was limited in practice with an ankle injury this week so this is a situation to monitor as well. Should one or both of these wideouts miss the game, Davis stands to enjoy a huge boost in potential. We’ve gotten glimpses of what that potential would look like, but none bigger than last week.

Despite being overshadowed by McKenzie’s monster game, Davis managed to find the endzone and gain 107 yards, all on two receptions. If he becomes the number two option to Diggs this week, he will do wonders with his increased targets. He could be a nice third piece in a Buffalo triple stack.

Jefferson gained some value with Cooper Kupp sidelined last week due to Covid protocols. He hauled in four passes for 50 yards. His eight targets were impressive and led the team. What’s more impressive, is he did this working from the arm of backup quarterback John Wolford. All that said, the postseason is the goal for every player that suits up over the course of the regular season. Jared Goff is more than likely to push through his thumb injury and Kupp, if activated, will play. This may take a bite out of the eight targets Jefferson saw last week. It may even render him irrelevant. Or, it could set him up for another fantasy-relevant day just in time for your DraftKings Super Wild Card Weekend Showdown Picks.

Seattle had one of the league’s worst passing defenses during the regular season. This opens the door for Goff, or Wolford, to light up the skies Saturday. Kupp and Woods own the target share in LA, but a weak defense could provide more players with opportunity. Jefferson proved he can triple up on his current flex pricing with his nine-point performance last week. The conditions are right for him to make another run at it this week.

It’s hard to trust a Seattle pass catcher not named Metcalf or Lockett. The two have the Seahawks’ target share on lock. If you were to add up the targets for every other receiver, tight end, or running back on the season, you would only get 22 more than the two combined. That said, when you look at the $14k price tag each for the dynamic duo, you will need to locate a dart throw with upside in a major way. Until last week Hollister had found the endzone in back-to-back weeks. He’s also garnered 11 targets over the last three games including four redzone looks.

You are hoping for another one this week resulting in a touchdown for him to get you any value. On the plus side, should he do it, you’ll get more than three times your return on investment on just one play. If he manages to go anything else on top of that, it will be a bonus for your DraftKings Super Wild Card Weekend Showdown Picks.

Perched among the best of the league’s tight end is Logan Thomas. He’s built himself a decent season on a losing, but still NFC East champion, Washington Football Team. Thomas finished the season with 72 receptions, 670 yards, and six touchdowns. He’s done this in spite of his quarterback situation. It’s safe to say he’s a reliable weapon for Washington. This is evident by his 50 targets since the beginning of December. Those targets have produced 38 catches for 342 yards and two touchdowns. There is a shot for Thomas to have another solid outing against a less than stellar Tampa pass defense. He will certainly continue to be a major player in the offense, so the opportunity will be there at least. Pairing him, Smith, and McLaurin could make for a profitable stack for your DraftKings Super Wild Card Weekend Showdown Picks.

While it’s the Antonio Gibson ground show Washington fans like to see, the McKissic air show has done well in support. Running back by trade, McKissic has been utilized effectively as a receiving threat for most of the season. He’s been targeted 42 times over the last five games. It resulted in 34 receptions for 251 yards and two touchdowns over that span. That works out to an average of just over 10 fantasy points a game.

J.D. McKissic has a 24% target share with Alex Smith at QB this season.

Tampa Bay has allowed the most receptions to running backs this season.

Tampa is one of the best in the league against the run, putting the pass-catching skills of McKissic squarely in play here. Look for Smith to lean a little heavier on swing or screen passes with McKissic benefiting from the targets. You may even have the benefit of low ownership for the box score watchers who base their plays off last week’s below-average performance.