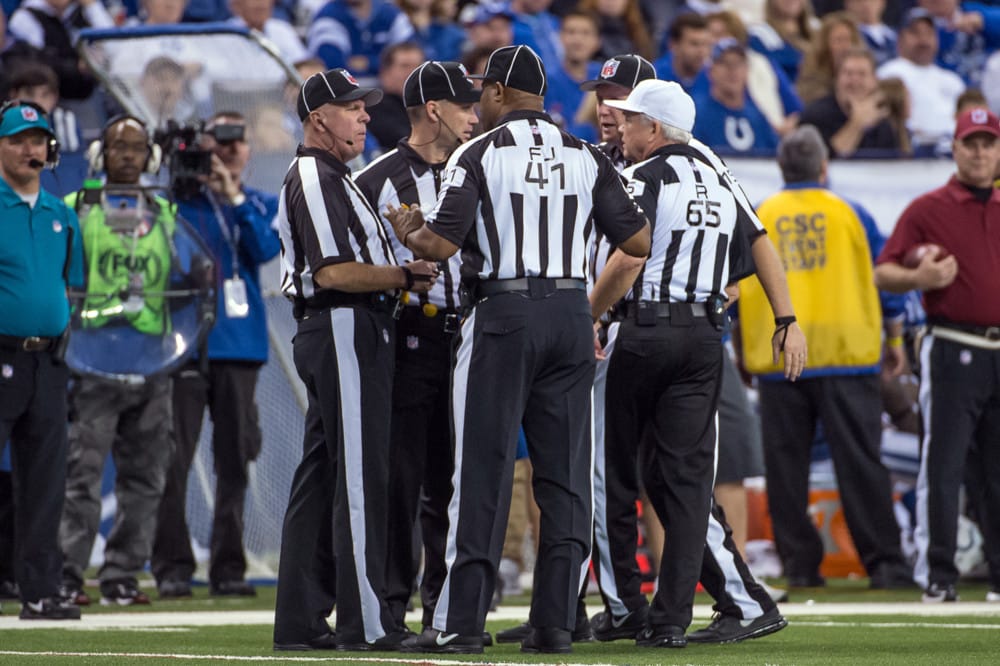 Just like that the regular season has come to an end. But it is the most exciting time of the year for NFL bettors and fans because the NFL Playoffs start this weekend! I tracked and followed the stats for most of the NFL referees this season and I hope you all were able to take advantage of the information and cash bets.

However, the season and referee trends go on. As a matter of fact, in this post, I further broke down the splits for the six referees assigned to the playoff games this weekend. Lastly, in this post, you will see the full bet trends breakdown, totals breakdown, and which referees are assigned to the playoff matchups this weekend!

Let’s get into it!

Allen finished the season with the home teams doing slightly better than the road teams. However, underdogs covered 60% of the spread this season. In addition, the totals finished 7-8 to the over with an average of 48 points.

Lastly, Allen will officiate the first game of the playoff weekend between the Indianapolis Colts and the Buffalo Bills. Allen officiated the Week 10 AFC South matchup between the Colts and Titans. As a result, the Colts
won the game 34-17 and covered the spread.

Hussey finishes the season with the home and road teams winning eight games each. Furthermore, underdogs covered in 69% of the games officiated by Hussey. In addition, Hussey’s officiated games finished 10-6 to the Under with an average of 48.34 points per game.

Lastly, Hussey will officiate the NFC Wild Card matchup between two division rivals the Seattle Seahawks and the Los Angeles Rams. Hussey officiated two matchups involving the Rams. The Rams failed to cover the spread in both games, however, were 1-1 straight up. Also, Hussey officiated the Seahawks’ Week 7 overtime loss to the Arizona Cardinals. The seahawks were a 3.5-point favorite in the game.

Scott Novak was one of the referees I highlighted the most during the season. The road teams were fortunate to have Novak officiate their games. As a result, road teams finished 12-3 straight up and 9-5-1 against the spread. In addition, Novak was 9-6 to the Under with an average of 47.17 points per game.

Boger finished the year with home teams finishing 10-6 straight up and 10-6 against the spread. Furthermore, in the games officiated by Boger, favorites and underdogs split at 8-8 this season. In addition, Boger has a 13-3 record on the Over with an average of 52.93 points per game.

Alex Kemp finished the season with the home teams benefiting the most in the games he officiated. As a result, home teams were 11-5 straight up and 11-5 against the spread. Furthermore, Kemp is one the best Over referees this season. Kemp also finished with an 11-5 record to the Over, averaging 54.33 points per game.

Lastly, Alex Kemp will officiate the contest between the Chicago Bears and New Orleans Saints. Kemp officiated the Week 5 matchup between the Bears and Buccaneers. Bears went on to win that game 20-19.

Shawn Smith is one of the most consistent referees this season. In fact, both underdogs and favorites finished 7-7-1 against the spread. Furthermore, home teams performed slightly better with a record of 8-7 straight up. In addition, the record had similar results. The Over finished 8-7 with an average total of 52 points per game.

Lastly, Smith will officiate the AFC North battle between the Cleveland Browns and the Pittsburgh Steelers. Smith officiated two games this season involving the Steelers. As a result, the Steelers split the season series, but in Week 3 the Steelers beat the Texans 28-21, covering the spread.