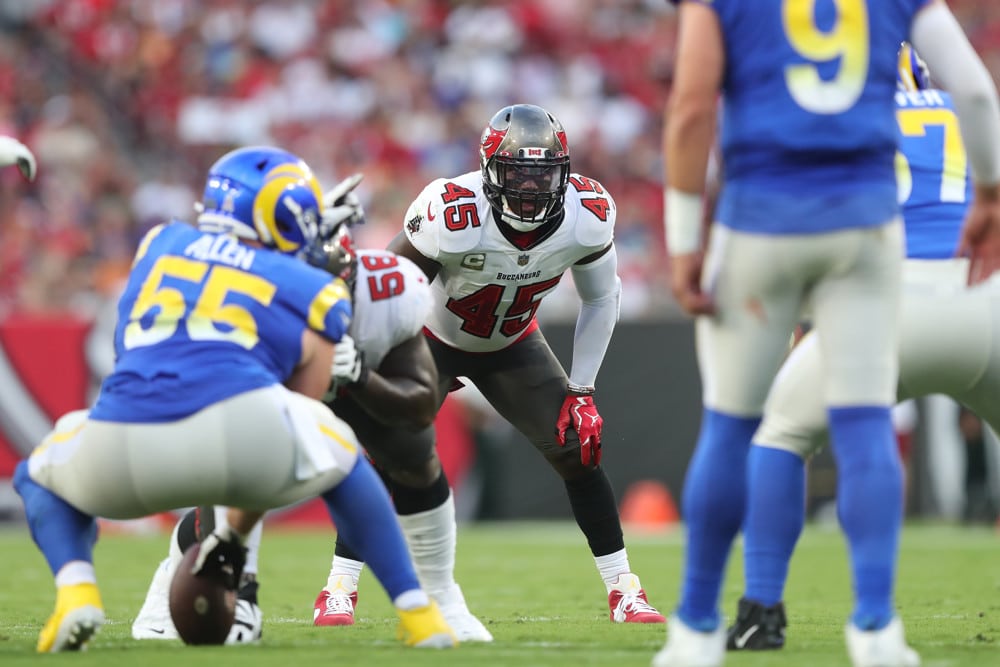 Just like in Week 10. We’ve sorted the best IDP plays for the next three weeks in this week’s 14 IDP Fantasy Football Footnotes edition. And based on the IDP’s 2022 consistency and fantasy football stats average.

We have just one thing to keep in mind; this tier-1 IDP ranking doesn’t include any players currently on bye in week 14. And this also only takes the next three contests into consideration, which should land at your championship doorstep if you’re not already in there.

As predicted by yours truly, Devin White has bounced back this season. And does indeed look more like the very top-end tier LB1 we saw his rookie season. And doing it by simply putting his combined tackle production with more big splash plays at the same time. So with the Saints (Top 12), 49ers (Top 15), and Bengals (Top 5) all offering top-end ILB production over the next three weeks.

We project that both White and his stud ILB partner LaVonte David carry a lot of teams to a championship and a ring. Especially knowing that injury and changes to this defensive line this past year have taken their toll immensely.

A model of consistency we don’t want to pass up. And his next three weeks’ IDP rankings, Bills (Top 10), Lions (Top 15), and Jaguars (Top 15). The thing about C.J. Mosely is. He consistently overachieves no matter what the matchup strength is. And thanks in part to this ho-hum defensive line in front of him.

On tap, the next three weeks are the Seahawks (Top 10), the Steelers (Top 20), and the Lions (Top 15). And as a bonus, that got him here. Frankie Luvu is another known matchup overachiever setting his own ceiling in any given contest.

And a captain on a defense that the offense is struggling. So this translates into more snaps each contest. Increasing his opportunity to record IDP production more often.

We did have a little injury scare with Patrick Queen being carted off the field. But the latest, John Harbaugh, says Patrick Queen has a thigh bruise, and X-rays were negative.

So in this take, not only do we pump up fellow linebacker Roquan Smith more if Queen was out. Both actually could have been listed separately on this list. So they land here basically as a tandem with the Steelers (Top 20), the Browns (Top 10), and the Falcons (Bottom 10) all on tap.

Another model of consistency and one with a hot playoff run starting this week again. So T.J. Edwards shows up again in the week 14 IDP fantasy football Footnotes as a great 3-week option. If we only could count on more than total tackles and get more splash plays.

But his overachieving in nearly every contest makes this one versus the Giants (Top 20). Then the Bears (Bottom 10) and the Cowboys (Top 3), a lock at fifth. And believe it or not. This 3-week projected stretch might land slightly under-ranked in the end as things flow through Edwards in this defensive scheme.

Most Tackles Through 10 Games
(@Eagles Players Since 2000)

Edwards is one of three #NFL players with 95+ tackles and 2.0+ sacks this year, joining Roquan Smith and Nick Bolton.#FlyEaglesFly pic.twitter.com/SrmnlRttHy

Week 14 IDP rankings special mentions that just missed. The Rams, Bobby Wagner, and Brown’s Jeremiah Owusu-Koramoah are for sure in the Top 10 solid over targets for the next three weeks.

A no-brainer when it comes to overall projecting safety. So it’s just a noteworthy  Derwin James plays the Dolphins (Top 5), the Titans (Bottom 5), and the Colts (Top 10) incoming. And his own personal guarantee to overachieve on average every single game.

Right on schedule when we need him. The veteran Bills Jordan Poyer has you covered with the Jets (Top 10), Dolphins (Top 5), and Bears (Top 15) in week 16. And as an added bonus. We’ll mention that the other Buffalo safety Damar Hamlin translates nicely here too. But just more as a lower DB1 in these same conditions with an upper ceiling worth mentioning.

Another strong veteran that’s been here and done this so many times over the years. Harrison Smith is a rock-solid tier-1 option with the Lions (Top 15), Colts (Top 10), and Giants (Top 10).

Harrison Smith with the tip drill INT that makes him the active leader for career INT (34) pic.twitter.com/Il4DdsEkfM

Assuming this productive safety position this year has paid off big for Julian Love. And his fantasy football IDP managers, of course, with DB1 numbers across the board. And despite not being super fantastic at it.

His on-par film performance is way better than the former IDP beneficiary Ryan Logan ever was. And on tap going forward, we have the Eagles (Top 5), Commanders (Bottom 10), and Vikings (Top 20). Granted, keep it in mind his rankings weigh heavy in his overperforming as normal.

A sudden uptick in opportunity has Jalen Pitre and, to a lesser extent, Jonathan Owens on notice again. We’re just favoring the matchups more for Pitre in the box than Owens deeper on the field this stretch. Plus, recently, there has been a shift in roles within the scheme itself that favors this Pitre projection more.

And with Dallas’s (Top 3) dual offensive threat, then the Chief’s (Top 10) mid-field attack up next. It falls off with the Titans (Bottom 5) a bit in week 16 when it might really matter. So he still would hold some tier-one upside even then trying to stop RB Derrick Henery.

The Texans rookie safety had himself a GAME despite the loss 👀 pic.twitter.com/HJoicVnxPv

In summary, Maxx Crosby is 100% ready to go. As for the others, this stretch isn’t as favorable as we’d like to see. But giving credit where credit is due. All these defensive ends have higher-end averages and stats to cover any match-up deficiencies off the edge.

So think of it more as ranked in order by the opportunity afforded them to record a sack the next three weeks. And we’ll be excited to see some of this week’s bye-week teams back next week for sure.

The only clear 3-week stretch DE winner, Maxx Crosby, has the Rams and Patriots, both top 10. And then still well in the running with the top 20 Pittsburgh Steelers in week 16.

Make that 2 sacks for @CrosbyMaxx today!

Week 14 Bengals (Top 20), week 15 Ravens (Top 10), and week 16 Saints (Bottom 5). And in the last three meetings versus the Bengals, despite any offensive line ranks. Myles Garrett’s averaged over one full sack per contest. So with nearly 1.5 sacks per game to his credit, the rest of the schedule slices up like cheesecake on paper.

Buccaneers (Bottom 5) in week 14, the Seahawks (Bottom 10), and Commanders (Top 5) in week 16. And Nick Bosa edges out Demarcus Lawerance here with overall consistency. And his ability to overachieve any given contest this season, as he’s (knock on wood) stayed healthy.

*Note about the sack leader post, Matt Judon and Micah Parsons are pass-rushing linebackers in the NFL. Which does not qualify them for this standard format IDP rankings.

Texans (Top 15) week 14, week 15 Jaguars (Bottom 10), and week 16 Eagles (Top 20). And not only is this a little rough in the schedule for DeMarcus Lawrence. But we have to remember that Dallas has at least three other viable pass rushers. Which also includes linebacker/edge rusher stud Micah Parsons.

The roughest 3-week stretch of our top-tier defensive lines. Brian Burns will need to work hard to get into the backfields. But has shown very capable of doing so. And Burns does records multiple total tackles in each contest. So this helps secure he’ll at least be able to come close to his average fantasy football points. And any sacks he’ll get will just open his ceiling a little more.

Week 14 IDP rankings special mentions that just missed. None, that’s it with teams on bye.

Barely displacing Chris Jones to second place. The Titans Jeffery Simmons has the best defensive tackle matchup schedule. So we’ll give him the nod knowing there is also a lot of stability that the young veteran brings to the table.

Kevin Byard and Jeffery Simmons breaking the #Titans down. pic.twitter.com/tIC9vEnmz0

Broncos (Top 10), Texans (Top 5), and Seahawks (Top 20). It’s not the best 3-week stretch, but Chris Jones makes every contest’s matchup a challenge. And overachieves big time when he does, and the matchups are favorable. So mark this one up as our pick to unseat Simmons in the end when it boils right down to it.

It’s far from the hot stretch back in weeks 8 through 10. But it’s darn near it, and why is Javon Hargrave the week 14 IDP-ranked defensive tackle? And one with a ceiling to lead the league in this department at least once in the next few contests. Especially playing at the highest Pro Bowl level of his career this season.

Career high for Javon. And he is the leading vote-getter for the Pro Bowl among DTs in NFC.

The Chargers (Top 15), Bills (Bottom 10), and the Packers (Top 15). We aren’t going to underestimate one of the best young defensive talents in the league. So keep starting Christian Wilkins as a DT and, in some places, DE, or wherever it’s been appropriate to do so so far. Because if anything, he’s proven this season. Wilkins is good to go with projecting his weekly fantasy football points average as his floor.

Eagles (Top 20), Commanders (Top 3), and Vikings (Bottom 10). And this could have been Leonard Williams just as easily as Dexter Lawrence. And it seems they have two top-tier defensive tackles this year.

So the only hair-splitting metric we used to list Lawerence in the IDP rankings. He’s got a few weeks worths of production this season. That’s it. And both slip when both are healthy. Because they do cap each other’s stability a little. Because they do play on the same 3-man interior defensive line.

Special mentions that just missed these IDP Rankings. The Jets Quinnen Williams is always a model of stability under pressure.