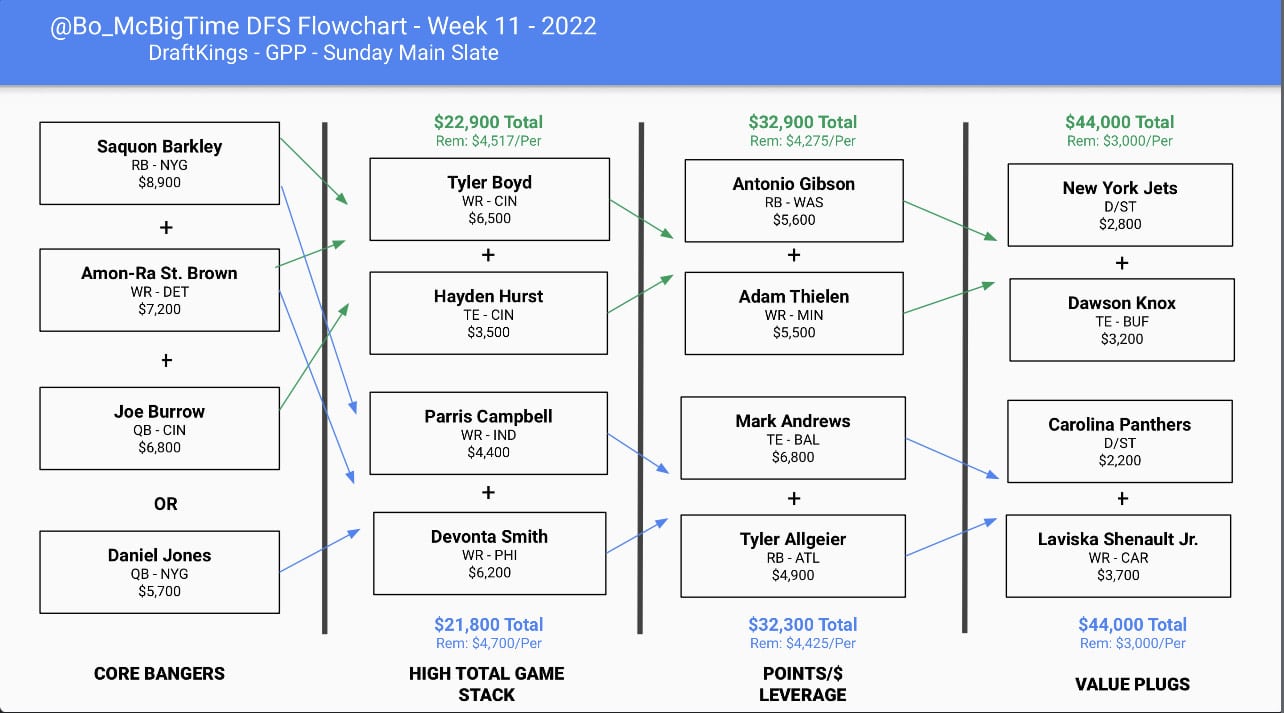 I feel amazing these days. The DFS winnings are accumulating like a snowball rolling down an alpine canyon. The SGPN DFS crew is scorching hot. I have also taken over for Scott Simpson in writing the DFS Stacks article each week. Check it out here.

We hammered some key plays in our Week 10 lineups, including another huge day for Justin Fields. Value plays Harrison Bryant, and Trent Sherfield also found the end zone last Sunday around a heavy dose of Saquon Barkley exposure. The secret is out: we’re loading up even more Saquon this week. Even the Vikings’ DST was a huge hit, with a ton of leverage against the Buffalo Bills in a stunning upset.

Winning at DFS isn’t as much about predicting the future as it is playing the numbers game and maximizing probabilities of optimal results. Contest selection and bankroll management are monumentally important factors. If you cannot afford to max-enter a specific tournament, it is very unlikely that you will have favorable odds of winning against those who are maxing out their odds. The DFS Flowchart is a visual aid I use to process lineup building and helps identify pivot points during the process. Let’s dive into the Week 11 NFL Flowchart.

I Stan for Saquon

Saquon Barkley is a generational talent at RB. He faced one of the worst run defenses in NFL history last week and did not disappoint us. The Detroit Lions aren’t much better than the Houston Texans at slowing down opposing RBs, so we’re going right back to the well. The $300 markup on Saquon this week will not deter me as it has for a good percentage of DFS managers.

His rostership projection is quite a bit lower, so we’re smashing the button into oblivion. Where bell cow backs are a dying breed, we must cling to the last precious few in DFS, especially when they face a defense that won’t provide the least bit of resistance.

Leverage is the difference between a player’s likelihood of appearing in an optimal lineup and the percentage of lineups he is rostered in. It is paramount at the WR position in DFS. WR leverage is shaping up to be quite scarce in Week 11. Many of the optimal plays are also expected to be heavily rostered. This leaves a razor’s edge when trying to build a lineup under the salary cap with ample upside. Mathematically speaking, the more likely optimal stacks will be with WRs who aren’t as expensive to roster.

Those putrid Houston Texans have been our RB punching bag all season. They now get to deal with the low-efficiency duo of Brian Robinson Jr and Antonio Gibson. Houston is a classic run-funnel defense. Washington enjoyed a run-heavy attack to knock the Eagles off their pedestal on Monday night. Robinson is going to enjoy good volume but lacks upside. Gibson is the guy this week. His receiving upside and big play ability is very exciting. Add in his bargain salary and very low projected rostership, and this is a sneaky smash.

Adam Thielen’s salary is comically low this week against Dallas, who got lit up by a rookie with brick hands last Sunday. Mark Andrews is a wonderful value at the top of the TE board if active. Tyler Allgeier stands to become a hot hand value for the Falcons. They will run the ball early and often. The rookie is dirt cheap for his expected volume.

Week 11 sports the toughest main slate of the season for picking value plays. They all just seem really gross. The best we can do is try to roster players who will get usage on Sunday and hope for the fantasy gods to answer our prayers. Laviska Shenault has assumed a larger role in the past few weeks for the Panthers and has plenty of big play potential. The Bills and Browns moving their game indoors opens the door for a nicely priced Dawson Knox to hit.

The play-action game has been Buffalo’s missing link recently. They will undoubtedly try to reignite that flame against Cleveland’s porous defense. The Panthers’ defense is stout against the run and poses a tough matchup for Baltimore this week. The Patriots have a terrible offensive scheme and face a very good Jets defense. I will be heavily exposed to the Jets above all.