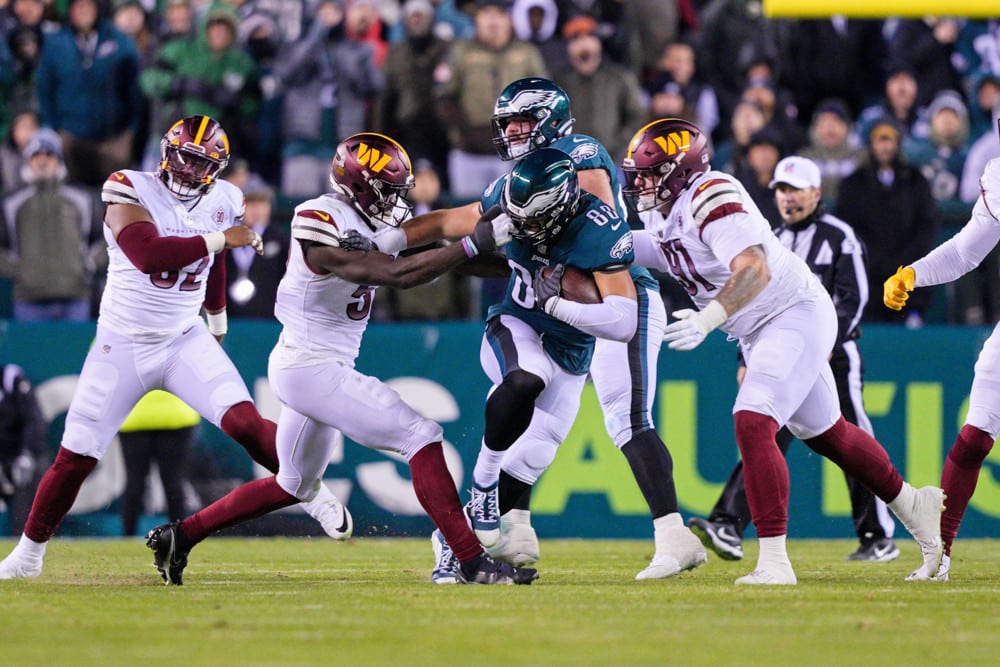 We are entering the home stretch of this season’s Fantasy Football playoff run. Each win is becoming increasingly important and the rosters are becoming thinner. Numerous big-name players suffered an injury this past week, and there is a lot of uncertainty about their status. In this article, I will break down the biggest Fantasy Football-relevant injuries and provide guidance on how to make roster decisions. It’s important to get the full picture of these injuries and what you can expect from your players moving forward. Welcome to the Week 11 Fantasy Football Injury Report!

Note: This injury report will be updated until the conclusion of Week 11. For the most current injury news and analysis, follow me on Twitter @SGPNFootballDoc!

One of the biggest fantasy football injuries of the year kicks off this Week 11 injury report. Unfortunately, Rams WR Cooper Kupp was trying to catch the ball last week when his foot got caught and twisted underneath a defender. This led to Kupp suffering a high ankle sprain and ultimately landed him on the IR.

With the Rams struggling heavily this season, the team may choose to shut him down for the year if they are out of the playoff race. Kupp underwent tight rope surgery to repair his high ankle ligaments earlier this week and is looking at around a 4-6 week recovery window,

A high ankle sprain refers to damage to ligaments (syndesmosis) connecting the lower leg bones above the ankle. These ligaments play a large role in lower leg stability during jumping and running. These injuries are less common than the low ankle or lateral ankle sprains as these ligaments are stronger and require more force to damage. Kupp’s route running and jumping ability will likely be limited if he returns before fully healing.

Rams WR Cooper Kupp is on IR with a high ankle sprain. – SIT/IR

Rams’ WR Cooper Kupp is scheduled to undergo ankle surgery Wednesday and the team is placing him on IR, per HC Sean McVay. Kupp is out a minimum of four weeks and with the way the Rams season is going, could be longer.

Denver Broncos WR Jerry Jeudy gave Broncos fans and fantasy football managers quite the scare last week after injuring his ankle. Early on in the game, Jeudy injured his ankle and had to be carted off the field. Many feared that the injury would be season-ending but it was quickly found Jeudy is in fact dealing with a mild injury.

What exactly he is dealing with has not been revealed, but Jeudy being labeled “day-to-day” is encouraging injury news. Ultimately, his level of participation in practice will help determine his availability for this week’s game. This is great news for Jeudy’s long-term fantasy football availability, however.

Broncos WR Jerry Jeudy is dealing with an ankle injury and is OUT for Week 11. – SIT

The Arizona Cardinals will be without one of their top offensive targets for the remainder of the season. Cardinals TE Zach Ertz had to be carted off the field last week after suffering an injury to his knee. He has already been ruled out for the season and will look to start fresh in 2023. The type and severity of the knee injury have not been disclosed at this time. Backup rookie TE Trey McBride has a great opportunity to take over Ertz’s targets in the offense.

Cardinals TE Zach Ertz is out for the season with a knee injury. – DROP

Sources: #AZCardinals TE Zach Ertz has suffered a season-ending knee injury. A brutal reality for Arizona and its veteran.

Chiefs WR Juju Smith-Schuster joins the Week 11 injury report after suffering a bit of a scary hit last week. That hit was ultimately not flagged but the video replay shows a hit to the head area. A concussion is a  mild traumatic brain injury that leads to disruption in the function of the brain. In a football sense, the brain is vital to processing information quickly and helping players to react.

Research has shown that most NFL players return to playing in less than seven days from injury but concussion symptoms are tricky. Concussions are still largely a mystery and everyone’s recovery can be different depending on the symptoms. The league has a standardized protocol, requiring players to complete five steps before being able to play including a full practice. Smith-Schuster was unable to practice Wednesday, and his practice status should be monitored this week.

WR Smith-Schuster is dealing with a concussion and is OUT this week. – SIT

The Cardinals have had a mostly disappointing start to the season but the Week 11 injury report offers some optimism. Brown had been serving as the Cardinal’s WR1 with Hopkins sidelined, so there was a major concern when he went down earlier this season. The team originally feared the injury would be season-ending, but after an MRI his recovery window is now about six weeks. Imaging showed a stable fracture in his foot that will not require surgery. Brown has allowed time for the fracture to heal properly before being able to ramp up his football activities.

Arizona welcomed back WR Marquise Brown on Wednesday this week as he returned to practice. Brown has missed the four games he needed to be on the IR and has a chance to play this week. It is important to note that Brown would be returning about a week earlier than expected if he plays this week. As long as the bone is healed properly, Brown should be able to return to the field. His practice status will help paint a clearer picture of whether Brown is able to play this week or not.

Brown has returned to practice from his foot fracture and has a chance to play. –  MONITOR

Some good news for #AZCardinals WR Hollywood Brown: Following the MRI, his foot isn’t as bad as was initially thought. It’s a small, non-surgical fracture, source said. Recovery time is about 6 weeks. He’s getting a second opinion from Dr. Robert Anderson before moving forward.

The Chicago Bears’ rushing attack took a major hit last week as their young RB Khalil Herbert injured his hip. Specifics regarding the injury are not available but it was serious enough for the Bears to put him on the injured reserve. With Chicago losing their RB2 for the foreseeable future, expect to see a lot more carries from RB David Montgomery or QB Justin Fields. The Bears’ top-ranked rushing offense will be looking for a way to replace Herbert’s production.

Injury was added to insult in the form of the Week 11 injury report. Not only did the Eagles lose their first game of the season, but they also lost their star TE for a significant period of time. Philadelphia TE Dallas Goedert injured his shoulder on a play where he was ripped down by the facemask and fumbled. Although it did not appear to be serious o the field, the injury has proved serious enough for him to be placed on IR. The exact nature and severity of the injury are unknown but what we do know is that Goedert will miss at least four games.

Eagles TE Dallas Goedert is on the IR with a shoulder injury. – SIT/IR

#Eagles TE Dallas Goedert will miss extended time with a shoulder injury suffered in the win over the #Commanders last night, sources tell me and @TomPelissero. Not a season-ender though. Injury added to insult on the play with the missed facemask that put him in harm’s way. pic.twitter.com/ndOPCiwKD2

The Keenan Allen injury report saga continues in Week 1. Chargers reliable WR Keenan Allen had to exit the game in Week 1 with a hamstring injury. This is where the rollercoaster began as Allen has been sidelined mostly all year, playing only a limited number of snaps all season. A hamstring strain refers to damage (tear) to the muscle in the back of the upper leg. Your hamstring plays a big role in generating the power in your legs that allows you to jump and sprint. Allen will need to be careful in his recovery as these injuries tend to be burdensome due to their high reinjury rate.

It appears Keenan Allen is learning firsthand how frustrating hamstring injuries can be. After some hope he could return in Week 4, Allen had been unable to return to the field after re-injuring his hamstring in practice. This changed last week as the Chargers WR tested his hamstring and tried to play in Week 7. It appears this was not the right move and his hamstring reportedly “got worse” and he only had two targets. The Los Angeles star WR would need to string together consecutive full participation practices before trusting him in your lineup.

Allen returned to practice for the first time since the bye, on Wednesday of this week. He only participated in a limited fashion however and will reportedly be extraordinarily cautious with his rehab. With his numerous setbacks to the hamstring injury, I’m not going to believe he will return to the field until I see it for more than a few plays.

Allen has returned to practice but is officially questionable for Week 11. – MONITOR

Keenan Allen says his hamstring got worse during the bye week when training.

He says next time he goes in a game it won’t be on a snap count, that it will be all or nothing, with his hamstring absolutely ready to go.

Los Angeles Rams QB Matthew Stafford is looking to get off the injury report in Week 11. After playing the entire game in Week 9 and having no apparent head injury, it was revealed last Wednesday that Stafford was in the concussion protocol. A concussion is a mild traumatic brain injury that leads to disruption in the function of the brain. The brain is vital to processing information quickly and helping players to react on the football field.

Research has shown that most NFL players return to playing in less than seven days from injury. However, this injury does provide uncertainty as concussions are largely a mystery and everyone’s recovery can be different depending on the symptoms. The league has a standardized protocol, requiring players to complete five steps before being able to play.

Stafford was unable to clear the concussion protocol last week and ultimately missed the game against Arizona. The rest seemed to do him well as he is back as a full participant in practice as of Wednesday. Barring any setbacks, he will likely start this week against New Orleans.

Rams’ QB Matthew Stafford, who missed last week’s game vs. Arizona while he was in concussion protocol, was a full participant in today’s practice, putting him on track to start Sunday vs. the Saints.

Stafford is practicing fully and is likely to play this week but will be without his top target Kupp. – HEALTHY SIT