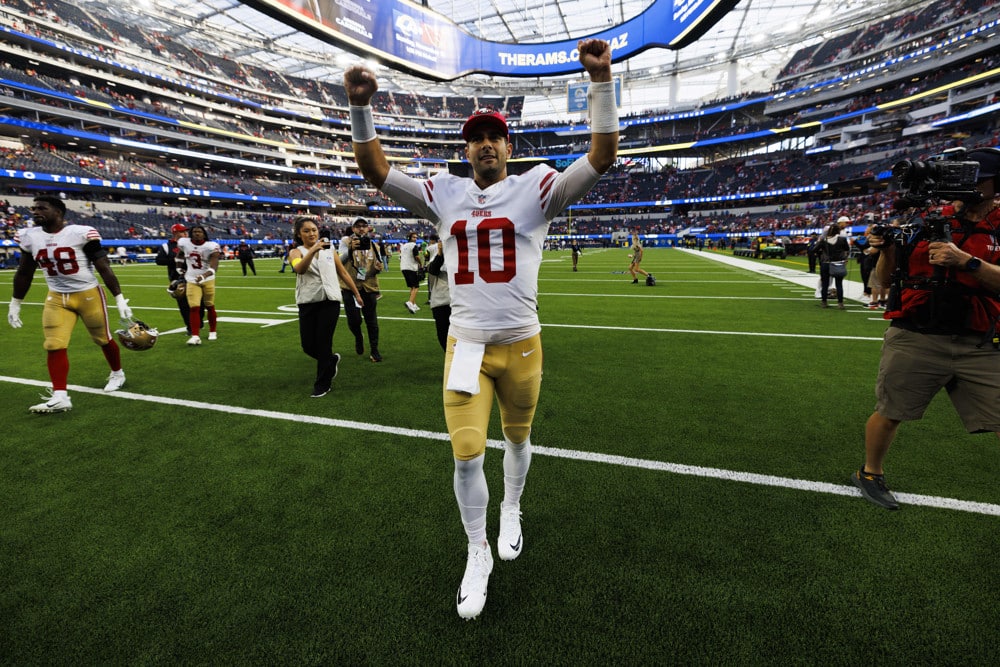 Week 10 has arrived, and we’re sailing down the back stretch of the NFL season. Whether you’re chasing wins in your fantasy league or creating the perfect DFS lineup, SGPN has you covered with the Week 10 Fantasy Football Rankings Update. There are some exciting matchups to advantage of in week 10. Check the Rankings Link Below to see which players are rising and falling!

Jimmy Garoppolo’s fantasy value received a significant bump when Christian McCaffery was traded to the 49ers. Garoppolo has looked solid across his last four starts. He has eight passing touchdowns across his four previous starts, and he had over 250 passing yards in three of them. The offense looks good with the CMC addition, but let’s not forget about Deebo Samuel, George Kittle, and Brandon Aiyuk; Garoppolo has a plethora of weapons.

This week the 49ers get the Chargers, who are bleeding yards on the ground; I believe the 49ers will be in the scoring zone with some frequency in Week 10, putting Garoppolo in QB1 territory in a matchup that could produce a TON of points! Garoppolo is my QB9 in week 10; I like him to secure three total touchdowns and finish with 250+ passing yards.

Kenneth Walker is getting that Work! He’s coming a 29-touch performance where he carried the ball 26 times and caught three of four passes. Walker totaled 129 total yards and added two touchdowns. He comes in as my RB6 in week 10 with a positive matchup against the Tampa Bay run defense. Tampa allows the 7th most rushing yards in the NFL. They’re allowing 4.6 yards per carry to opposing running backs; it should be to the benefit of Walker in week 10.

Walker has 20+ touches in three of his last four games and seven rushing touchdowns in his last five games. He’s a homerun play based on his elite volume and opportunities to score week in and out.

AJ Brown is another player on an absolute terror. He has five total touchdowns in his last three games, alongside 282 receiving yards on just 15 catches; that’s 18.8 yards per reception. Brown is my WR2 this week in a huge plus matchup against their division rival, the Washington Commanders. The Commanders rank top 5 for most receiving yards and touchdowns allowed to wide receivers this season.

This will be another day of feasting production for Brown. I’m expecting him to score at least two touchdowns and clear 100+ receiving yards. Look for him to splash all day long; there isn’t a DB on the Commander’s roster than can handle Brown without double coverage.

I have Cade Otton as my TE9 coming into week 10. He has a great matchup, and the Buccaneers’ offense is almost exclusively vertical. Brady has passed 40+ times in seven straight starts. Otton has at least five targets in the last three games and is coming off his first touchdown in the NFL in week 9. It was the first TD from a Tampa TE this season.

The Seahawks allow the second most receiving yards to tight ends this season, along with the 3rd most touchdowns allowed. There’s no argument to sit him this week based on the potential volume and matchup.