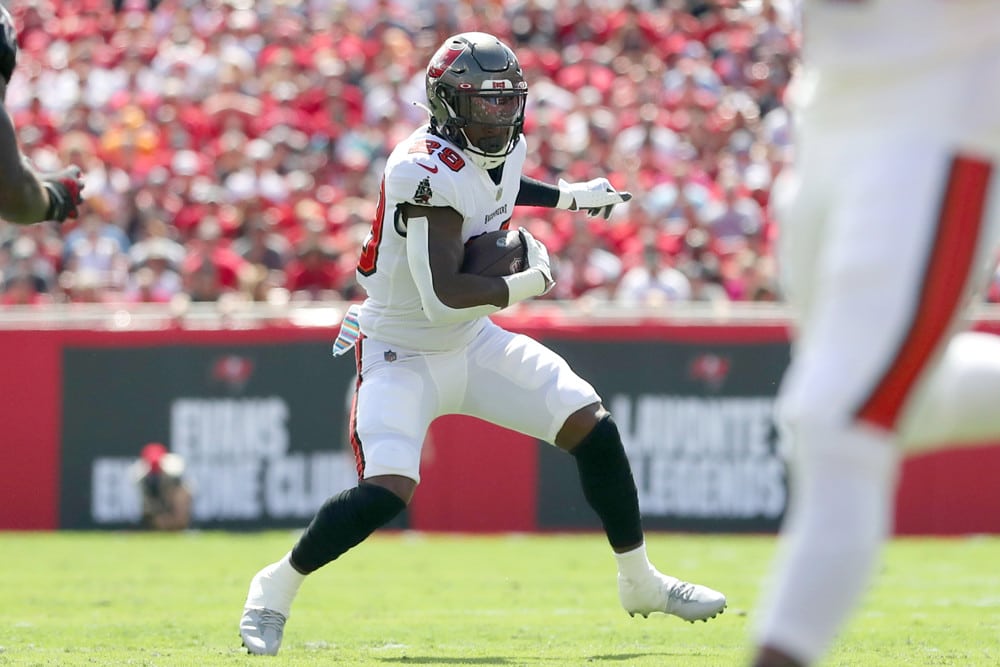 Up to this point we have shared snap counts, target shares, and carry splits for major movers on a week-to-week basis with suggestions on what to do regarding waivers, trades, or drops. We are now at a point in the season where you need to consider not only NFL Snaps but also the Running Back handcuffs for those major pieces of your contending roster. Playoff season is a season that fantasy owners reflect on decisions they made, or worse, didn’t make before the fantasy football trade deadline. Let’s just look at the past 3 seasons and see how handcuffs would have affected your chances.

In 2019, Josh Jacobs missed Week 14 and allowed DeAndre Washington to score over 20 fantasy points. Two other main starting running backs missed week 14 in Le’Veon Bell and James Conner. In 2020, Week 15 was the week of backups with Tony Pollard scoring 29, J.D. McKissic scoring 25, and Giovani Bernard scoring 24 when the incumbent starters were out with injuries. 2021 was no different when Duke Johnson was the RB1 overall in Miami in week 15 and Jeff Wilson, while filling in for Elijah Mitchell, was the RB3 overall. Obtaining your RB Handcuff must be a priority for you before the trade deadline if you want to improve your chances of bringing home that trophy.

Prior to Hubbard’s Injury

With only 1 week of data, the Carolina backfield is likely still one of slight mystery. In week 7 following the trade of CMC, we saw a 55/45 split with Foreman leading the way in snaps, he dominated about two-thirds of the carries. If you couple that with his performance this past week, he is the clear front-runner. This leads us to Chuba Hubbard. He looked good in Week 7 against a TB-run defense that is solid. He averaged 7 yards per carry, looked explosive, and go in the endzone. Here are some recent trades involving Hubbard:

Chuba Hubbard for Velus Jones and a 3rd (Dynasty)

I would take either of these trades in a contending type of situation to solidify the running back in an offense that is wanting to run the ball.

We were all pretty excited about what we thought AJ Dillon was going to be in the GB Packers offense but that has since, come crashing down. This doesn’t mean however that you should forget or avoid him, especially if you are the Aaron Jones owner. Here are some recent trades involving AJ Dillon:

All of these offers are sides I am willing to stick with Dillon on. The upside is massive if, heaven forbid, Aaron Jones suffers an injury. Even without the injury, he has still seen double-digit touches in 6 of 8 outings and 15 or more in 5 of 8 so there is still some flex appeal.

Nyheim Hines is out of town in a trade to the Buffalo Bills at the deadline which will open up a role for Deon Jackson to be the primary pass catcher out of the backfield. We saw Jones have 10 targets in the game that Taylor missed in week 6 and catch all 10. We also saw him produce pretty well on the ground. If Taylor manages to aggravate that ankle and miss, he is a smash play. He is only owned in 10% of leagues and should be added to your roster immediately.

The Las Vegas backfield is a little more in question. While it appears that Abdullah has a hold on the backup job he has not gotten a single carry all season. Zamir White is who I would take my shot on as a Josh Jacobs owner. The team let Kenyan Drake go because they were happy with what Zamir White was doing in the pre-season and camp. Look for him to be the true backup. He is currently owned in 10% of redraft leagues.

This is a pretty easy one considering the others we have discussed up to this point. Alexander Mattison is a must-add for the Dalvin Cook owner moving into the playoff season. He is owned in 53% of redraft leagues and should be added if he is available. Let’s look at some recent trades:

All three of these are solid as a Cook owner and you should think about it. Mattison should be considered a “high-value” handcuff.

After weeks 1 and 2, we were questioning if Stevenson was going to be like the AJ Dillon situation we discussed before. Luckily for us, in this instance, it was not the case. AJ Dillon has had a greater than 50% snap share in every game outside of week 1. With all that being said, he’s had the same or more opportunities as Harris in every game outside of week 1. He is the alpha dog in the New England backfield. Even with that, Damien Harris provides league-winning upside if Stevenson misses time based on volume and touchdowns and is extremely affordable, check it out:

To protect your playoff run, these trades are well worth it. Don’t pass up the opportunity to solidify your chances when the prices are this low.

While I don’t have snap shares or anything to discuss around Elijah Mitchell because he has been out on the IR the last few weeks. He is due back in Week 10 based on reports and with Jeff Wilson traded to Miami, it’s a great opportunity for Mitchell. This tells me that the team believes He will be ready to return after the bye week and people may leave him on the waiver wire in redraft as he’s only owned in 65% of leagues. Mitchell has a league-winning upside if the oft-injured CMC falls yet again.

Rachaad White is the clear-cut backup to Fornette for the Tampa backfield. He provides them with excellent pass-catching abilities and has seen 18 targets over the last 5 games. Fournette is dominating the snaps and total opportunities but with White getting playing time he is a boom candidate with a potential injury. Fournette always seems to miss time at the end of the season:

White is only owned in 45% of redraft leagues and could be available to you at no cost but here are some recent trades: