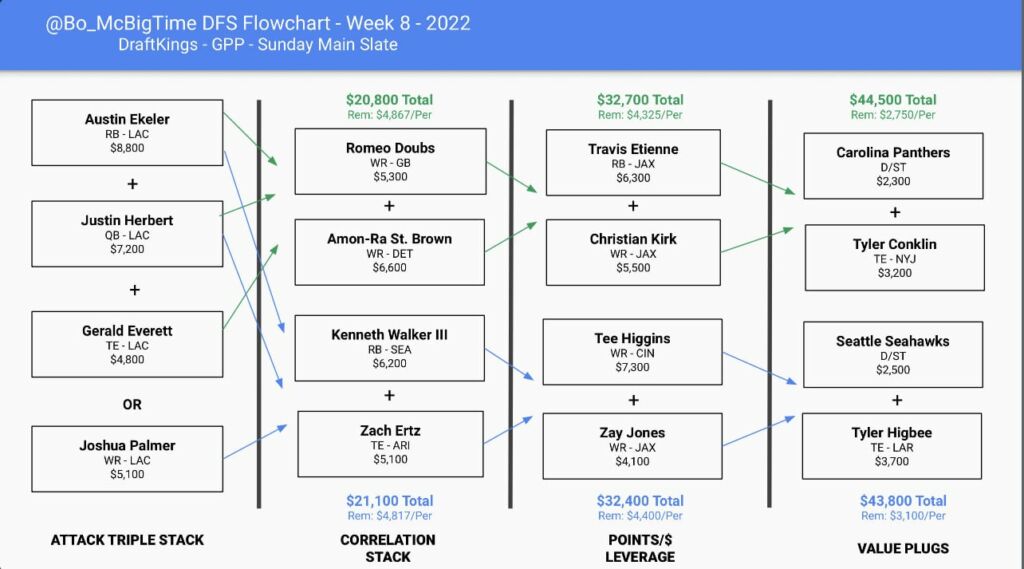 The DFS scoring last week was higher than Willie Nelson, and Snoop Dogg locked together in a shipping container in the mountains. The Flowchart lineups were not the best. We were severely let down by the Raiders, who were completely shut out by the Saints. Across the other DFS offerings here at SGPN, however, we slammed the competition with heavy utilization of the Dolphins and Eagles.

The change of pace this week is the presence of a few games with large point spreads and shootout potential that will certainly play out much differently than Vegas is implying. We are attacking those games to maximize our leverage against the field in GPP tournaments. Whether you are playing one lineup or 150, your key to a big-money takedown comes down to putting together an optimal player pool.

Your core plays are your most-rostered players and the foundation of most of your builds. The DFS Flowchart is a visual representation of my thought process for the DraftKings main slate each week. I play anywhere from 50-150 lineups each week, so the chart is a snapshot of my most prominent ideas and not a broad brushstroke of my pool.

I am pivoting away from loading up on one game stack like last week for Week 9. With more intriguing games with many great value pieces that carry leverage, I will be getting skinnier to have as many as three different games focused on a single lineup. Take my hand, and I’ll show you.

The injuries to Mike Williams and Keenan Allen have drawn attention away from the Chargers in DFS. Good. We just witnessed PJ Walker and the Panthers drop 34 on this Falcons’ defense. Justin Herbert has been less than stellar without his full complement of weapons this season, but this is a get-right game for the Chargers. I love the Ekeler matchup and the fact that the RB1 in fantasy this season is projecting to a sub-20% rostership.

One of Gerald Everett and Joshua Palmer will be fed a copious amount of targets in this game. My favorite run-back from the Falcons side is Cordarrelle Patterson if he is activated from the IR in advance of the game. If he isn’t, I’m fine with just the Chargers. Kyle Pitts is coming in hot but very chalky. Drake London just hasn’t been pulling the same target volume since Patterson went down. The injury was the main catalyst in the team’s reluctance to open up the passing game in his absence.

Until last week, scoring in the NFL and in fantasy was lagging behind the modern pace. As the air gets a bit brisker, we are seeing offenses hit their midseason stride and heat up considerably. I expect more than half of the ten games on the main slate to go over 45 total points. One of those games is the one with the highest implied total between the Cardinals and Seahawks.

Each offense is capable of scoring in bunches, while neither of the defenses are considered great units. Beware the letdown, however. These teams met in October and put forth a 19-9 game. I still like Ken Walker and Zach Ertz; they were the two brightest fantasy performers in the first meeting.

The other divisional matchup I feel could sneak into shootout territory is the Packers versus the Lions. Detroit is the classic slump-buster for Green Bay. Aaron Rodgers is uncharacteristically struggling this season, but the Lions are the stone-worst defense in the NFL. It’s a must-win for Green Bay, so load up on Rodgers, Aaron Jones, Allen Lazard, and rookie Romeo Doubs. The Lions aren’t slouching on offense, always emphasizing their infatuation with getting Amon-Ra St. Brown a ton of targets.

That’s a lot of Jaguars

The short answer for why I’m flooding my pool with Jacksonville Jaguars? The Raiders’ defense stinks. Also, Trevor Lawrence is due to return to his early-season passing form. Travis Etienne has been a revelation. Evan Engram is getting enough volume to overcome his inevitable two drops a game. Christian Kirk has performed up to his lofty contract against teams with weak slot corners.

The Raiders’ entire defense (except on the edge) is playing like crap. Zay Jones is appearing in my models as one of the best values on the slate. It might be pretty gross, but the Jaguars’ offensive players have a choice matchup here and are neither chalky nor expensive.

Like a closer in baseball, DFS managers must have a short memory. Wins are great, and losing sucks, but it really helps to be able to move on from both. The most difficult task for a DFS manager who loves the game of football is removing the players’ names from the thought process. DFS is purely a game of probabilities.

When the random happens, you hope that your mind was in that realm beforehand. Tyler Higbee is not a good football player. I can’t stand that the Rams feature such a mid-player so heavily, but he is so cheap this week that I can’t help but put him in my player pool and eat the chalk.

I feel the same way about Engram, but if he wins me money, I can’t hate him too much. Emotions and narratives might have some nuanced place for setting DFS lineups, but my intuition is more built around the Xs and Os of the game. I’ll stick to what I know, which are probabilities and the game of football. Whenever I apply my personal emotions about players to DFS, I lose. When I render each player into a purely-numerical context, the results are incredible. Let’s get to cashing.