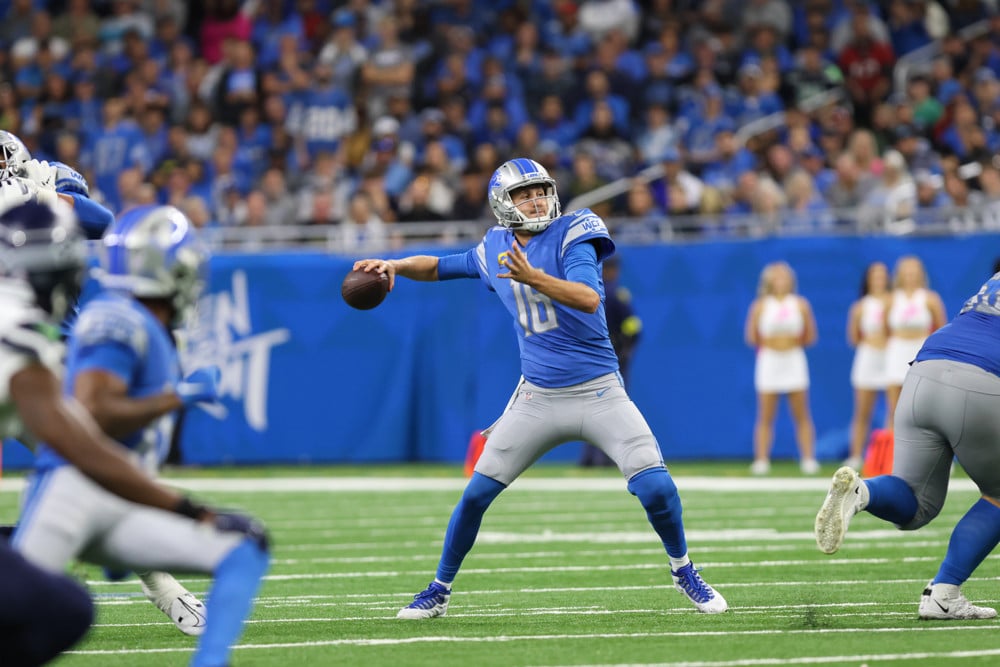 The participating fantasy analysts include David Heilman, Bradly Stickler, Justin Bruni, and Emerson Beery. Be sure to follow up with them on Twitter with any start/sit or season-long inquiries. You can also discuss Week 5 rankings on our Discord Channel; we’re always talking Fantasy, and we want to hear from YOU!

Jared Goff has been one of the fastest risers in our fantasy football rankings as he is the QB5 on the year. He leads the number one scoring offense, and the Lions also have given up the most points in the NFL as well on defense. This is a recipe for fantasy football success as Goff is 11th in the NFL in pass attempts. Some of his underlying metrics suggest he’s overperforming compared to his expected output. So a drop-off from his stellar start is to be expected. Nonetheless, even if he regresses he should still be in the starting conversation most weeks. Particularly with bye weeks right around the corner and injuries beginning to pile up, Goff is a starter in 1QB leagues.

Signs for a future 🔥 combo

Geno Smith is our other big Quarterback riser and no one has exceeded expectations more so far in 2022. It’s hard to find where to begin. He ranks #1 in true completion percentage, #5 in yards per attempt, and #5 in total QBR (Player Profiler). This is absolutely remarkable and DK Metcalf and Tyler Lockett are thriving after being avoided in fantasy football drafts this past Summer. This ranking might actually be far too low given his current performance and the weapons in this offense. We’ve seen Smith for years at this point, so like Goff, he can’t be expected to maintain this production level. However, he has also entered the QB1 conversation and is now a must-start in superflex leagues.

I’m going to have to disagree with my fellow SGPN Fantasy Football Rankers here as I think Breece Hall should be much higher. I have him as my RB16 and am thinking of moving him even more in this struggling Running Back landscape. After playing second fiddle to Michael Carter for the first two weeks of the season, Hall has played most of the snaps the last two weeks. Furthermore, Hall has out-targeted Carter significantly in the last two weeks too. Hall’s talent as a runner is obvious, but it was a big question coming into the season whether he would get passing work. Those concerns have been put to rest as Hall’s workload should continue to increase as the season progresses. If the Jet’s offense can find success under Zach Wilson, Hall has RB1 potential for the remainder of 2022.

If you can, go trade for Breece Hall NOW.

His usage has gone up weekly and he’s bound to blowup soon.

He’s been very consistent weekly, and he’s an excellent RB 2 for an RB 3 price tag 🏷️

Tyler Allgeier will get his chance to lead the Atlanta Running Back room after it was disclosed that Cordarrelle Patterson was put on injured reserve. He found success in limited action this past Sunday compiling 104 total yards on 8.4 yards per carry. He was likely picked up off of waivers this past week in your league. I would be wary of immediately putting him in fantasy lineups though. Allgeier could wind up in a timeshare with Caleb Huntley in what is still a bad offense. Although this weekend’s matchup is intriguing given its high projected point total, treat him as a low-end flex option this weekend against the Tampa Bay Buccaneers.

Chris Olave has put himself in consideration for Offensive Rookie of the Year with his performances to date so far. Through four weeks he’s compiled 335 yards receiving, 1 touchdown, and a ridiculous 16-yard average depth of target (Player Profiler). These are elite numbers for a rookie and he’s already entering weekly WR2 consideration for fantasy purposes.

In addition, with Michael Thomas‘s status up in the air for the next few weeks, he should be locked into lineups as a top-20 option. Even when he returns Thomas has shown little ability to stay on the field in recent years. The changing of the guard could be happening earlier than expected in New Orleans.

After missing the first two games of the season George Kittle returned in Week Three and has found little success. He’s averaging 5.6 fantasy points per game and is already looking like a bust at his top 5 TE ADP. He’s only running a route on 69.6% of the plays he’s on the field too, which ranks 14th among Tight Ends. With the injury to Trent Williams in Week Three, George Kittle has been asked to block on a significant amount of plays.

Unfortunately, his is similar to how he’s been used in the past to the detriment of fantasy managers. He’s one of the best Tight Ends in the NFL, but a lot of what he does won’t translate to the stat sheet. The 49ers are a low-volume passing offense as well which will continue to cap his upside. Even a TE8 ranking feels strong this week and I would much prefer options like Tyler Higbee or Gerald Everett.

“Billy, this is George Kittle.

He’s an elite route runner, maybe the most dangerous TE in NFL history after the catch, and he’s a fiery competitor.

His defect is he now plays left tackle.” pic.twitter.com/L7bvx2gltO