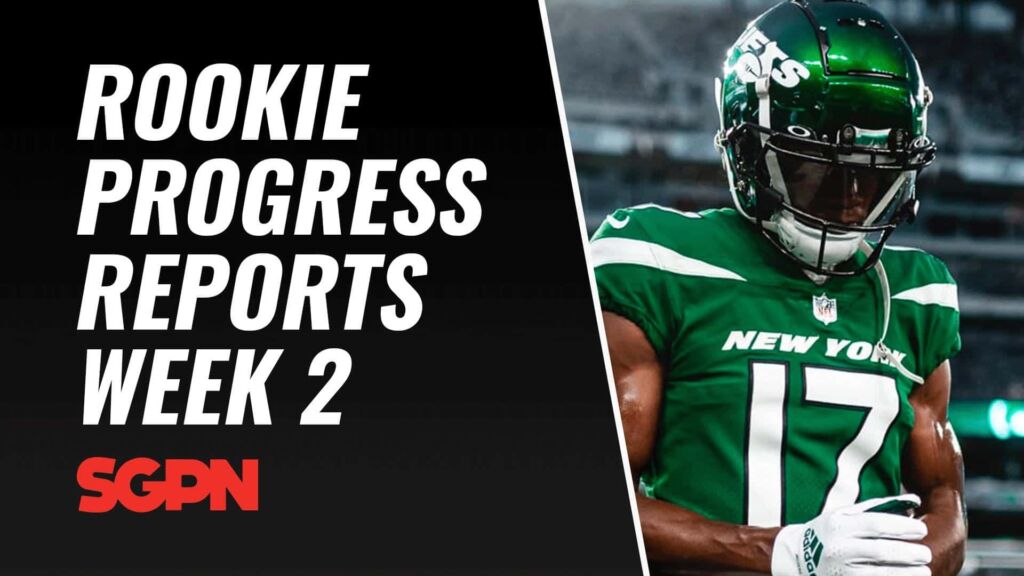 This class took a lot of heat and jokes this off-season. They are quickly putting those things to bed as we continue to be impressed, specifically with the receivers. Right now, there are three rookie WRs in the top 15 overall at the position.

Breece Hall is RB26 overall in PPR formats, and Dameon Pierce is coming off of a much improved week. We also got our first look at multiple running backs this week. We are going to continue to track this class’ progress; here are their week two progress reports.

Drake London saw increases in snaps, targets, and it resulted in increases in production in all areas. London is the clear focal point of the offense and is WR #14 on the year in fantasy. At this point London is a weekly starter and living up to his high draft capital. 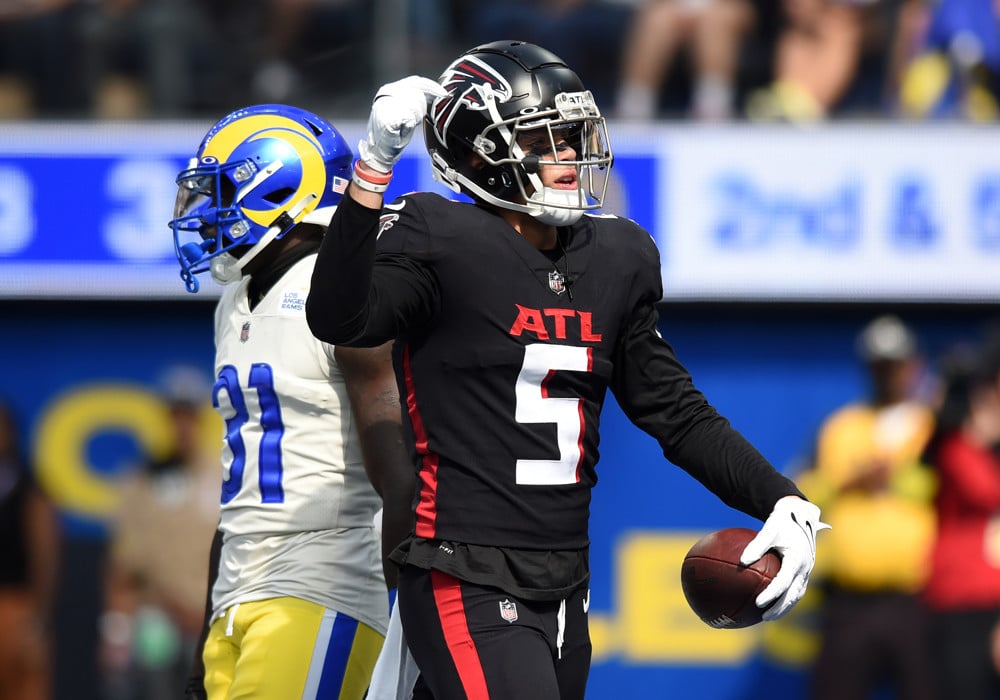 Garrett Wilson is a top 12 WR right now, even while wearing a Jets uniform. Wilson was faded all offseason and by August he was a tremendous value. Pre-draft Wilson was the consensus top WR, with some favoring Drake London. After the draft, dynasty drafts had Wilson tumbling down the board. Wilson dropped to the 5th or 6th WR off of the board in rookie drafts. The Jets let us know all offseason that they were looking for an Alpha.

They attempted to trade for Tyreek Hill and D.K. Metcalf, the fact that Wilson is the clear #1 in this offense shouldn’t be a huge surprise. The biggest question mark will be, what this offense looks like under Zach Wilson. That remains the question, but all signs point to Wilson being the top option in this offense and a weekly starter.

Week 2 was interesting for Chris Olave as the offense definitely tried to get him involved with 13 targets. The problem is he was only able to hall in 5 of his 13 targets. He did more with his catches this week, 16 yards per catch for 80 yards is great. This is much better than the 3 catches for 41 yards last week.

We just would like to see higher than 50% catch rate. This isn’t all on Olave, some of those balls were uncatchable or defended passes. Right now he is averaging 9.5 fantasy points per week, not really someone you want in your lineup just yet. But, the snap counts, targets, and air yards suggest he will be there soon.

Jahan Dotson’s touchdown line was 3.5 on the year. Dotson had three touchdowns already this season and is the favorite for R.O.Y. Dotson is also the favorite for the best value. He was going in the early-mid 2nd rounds of drafts this off-season. Dotson saw an increase in yards per target (11.8) and yards per catch (14.75), and a whopping 99% snap count. Dotson is an every week starter, is currently WR #15.

Treylon Burks was involved early in the game, catching the very first pass. But, he still didn’t play on over 50% of snaps or get the kind of targets that you need for top end production. Burks was pulled with the rest of the starters in the 4th quarter due to this game being a blowout. That being said, Burks is still not someone you can start. Burks is averaging a little under 9 points per game, you will need to be patient.

Christian Watson continues to disappoint, and now he is limited in practice with an injury. This is a player that has a lot of great athletic tools; it might just take a little while for him to develop. Be patient with him as well, I know this is harder for those who used a 1 st pick on him. This could be a lesson learned, talent over landing spot. Staring at those who took Watson or Skyy Moore over Garrett Wilson. Just know that you are not going to be able to rely on Watson as a starter in the near future.

Breece Hall is RB #26 on the year so far, but the useage is a bit frustrating. Week 1 he had ten targets and was used almost exclusively in the passing game. In week 2, he only gets one target and plays on 27% ofsnaps. This is not good enough for the draft capital you spent on him for sure. The silver lining is that 50 yards on the ground with only seven attempts. Going to talk about this in my next article, but this is a great time to go get Breece Hall.

It was great to finally see Ken Walker on the field, but this performance did not give you anything to be excited about. This was his first game coming back from an injury, so evaluate with caution. The positive is that he was involved when he was on the field. As the snaps go up, we can only hope that the production follows. We can also hope as he gets healthier that the efficiency also increases as this was a very inefficient performance (2.5 yards per carry).

The hype train for George Pickens has people jumping off of it left and right. Now is the time to buy and take advantage. Mitch Trubisky barely has 300 yards in two weeks and only two touchdowns on the year. This team could easily be 0-2; Kenny Pickett’s season will be here shortly. Pickens ADOT (Average Depth of Target) is 21.2 yards, and he is averaging 63.5 air yards per game. This, combined with his snap counts, points to future production. Pickens is another player that you should target now before it is too late.

All of the things that gave us pause for concern in the pre-season are becoming a reality. Skyy Moore has been more involved on special teams than on offense thus far. Moore is barely a rotational piece, and until he gets playing time, there is no sign of fantasy production any time soon. Hopefully we can see the snap counts grow, and by the end of the season, he is someone we can count on. I know a lot of you drafted him pretty high based on the landing spot. It would be foolish to sell at this point. Just hold if you have him and if you want Moore, you might find someone on tilt that gives him away cheap.

James Cook was benched after fumbling Week 1, and we barely got to see him. We did see him a lot more in Week 2. Unfortunately, this was mostly in garbage time of a blow-out. Cook has seen minimum usage in the passing game, and it is pretty clear that he is 3rd in the pecking order right now. This is not great, but the season is still young. This can change quickly, be patient

Rachaad White’s performance was really more about him not being on the field. Fournette had 87% of the snaps, and White had even fewer opportunities than last week. This led to less production, and his drop may have had something to do with it. White’s opportunities could change at any time, but he is not sniffing any fantasy lineups for now.

Davis-Price was pretty heavily involved getting 14 attempts. He really didn’t do anything with them aside from annoy Jeff Wilson Jr. managers. He did suffer a high-ankle sprain during the game and will be sideline for a few weeks. This opens the door to fellow rookie Jordan Mason or even Deebo Sameul as starter Elijah Mitchell is also out. Davis-Price shouldn’t have left the taxi squad and he will be staying there or on your IR for a bit.

This was a great improvement all around for Pierce and he looked good. No touchdowns and not a lot of receptions kept the fantasy points down. This might be a great opportunity to go get Pierce. His upcoming schedule is fantastic and this buy window could close quickly. The team said they wanted to get Pierce more involved and they absolutely did. His snap counts and his production doubled, great sign for him moving forward.

Kyle Phillips came into the game questionable, and that could be a big reason behind this performance. Phillips negative fantasy points are definitely something of concern. The offense as a whole is just a concern. The Buffalo Bills are good, the Giants are not as good as their 2-0 record may appear. This team is not the same without A.J. Brown and Derrick Henry doesn’t yet look like himself. This is a good example of how things can change quickly. Phillips is a drop in redraft and in dynasty he is deep on the bench until further notice.

Doubs had a dismal performance Week 1 and somehow it got worse. Lazard returning wasn’t a good thing for Doubs and resulted in him playing on only 37% of snaps. Doubs only positive was his 13.5 yards per catch. But, he is going to have to see a lot more opportunity to be considered to start. Until then, his stock continues to trend down.

Tyler Allgeierdidn’t look very promising while out there with the opportunities he was getting. Allgeier will continue to be involved with Damien Williams on the short-term IR. But, this performance gives no reason for you to think about starting him. Patterson and Mariota are still the top rushers on this team, and Williams will be back in a few weeks.