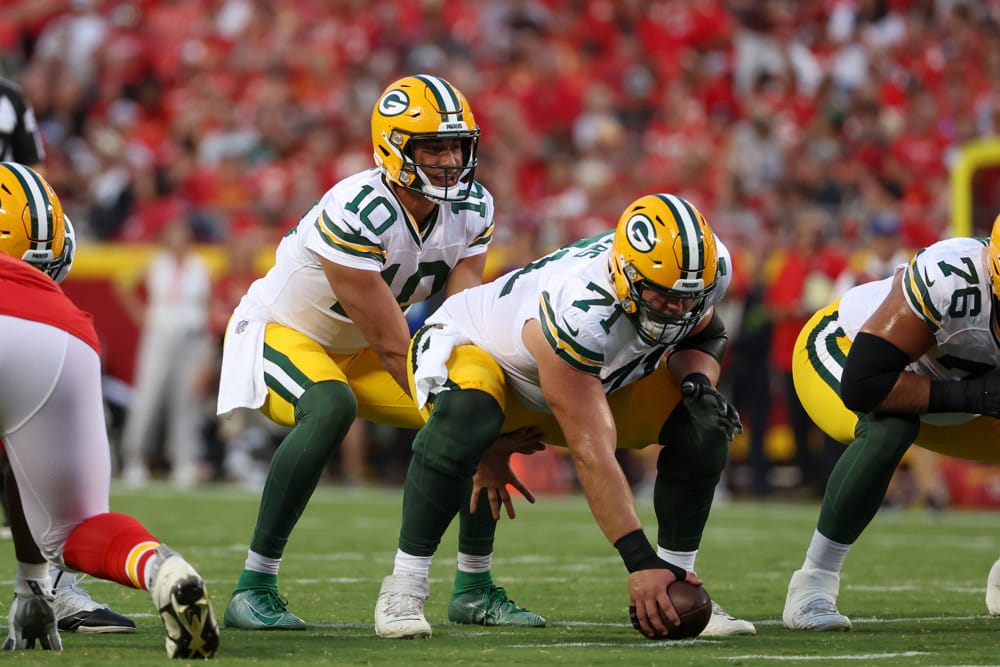 Only a few more days to get your future bets in before the start of the 2022 NFL Season! In this NFC North Division Win Totals and Division Preview, we will be diving into each team’s win total and division champion odds. All odds are via WynnBet.

The NFC North has been a division largely dominated by the Packers in recent years, with the exception of the Minneapolis Miracle in 2018 that led the Vikings to the 2017 NFC Championship game and the 2018 season when the Bears won the Division. Other than that, the Packers have won the division 8 of the last 11 years. So the question is, is there actual value in betting on a team other than the Packers to win the division this year? Let’s take a look at the NFC North Division win totals and find out.

The Minnesota Vikings are coming off two back-to-back losing seasons under head coach Mike Zimmer. Mike Zimmer was fired after the final game of the 2021 season along with their general manager Rick Spielman. In January of 2022, the team hired Kwesi Adofo-Mensa as the new general manager. Adofo-Mensa had worked for the Browns and the 49ers before the Vikings picked him up earlier this year. And the new head coach for the Vikings is former Rams offensive coordinator Kevin O’Connell. Leading the team once again is Kirk Cousins, who most all can agree is the most underrated quarterback in the NFL. However, Kirk has only led the Vikings to the playoffs once in his four years with the team. 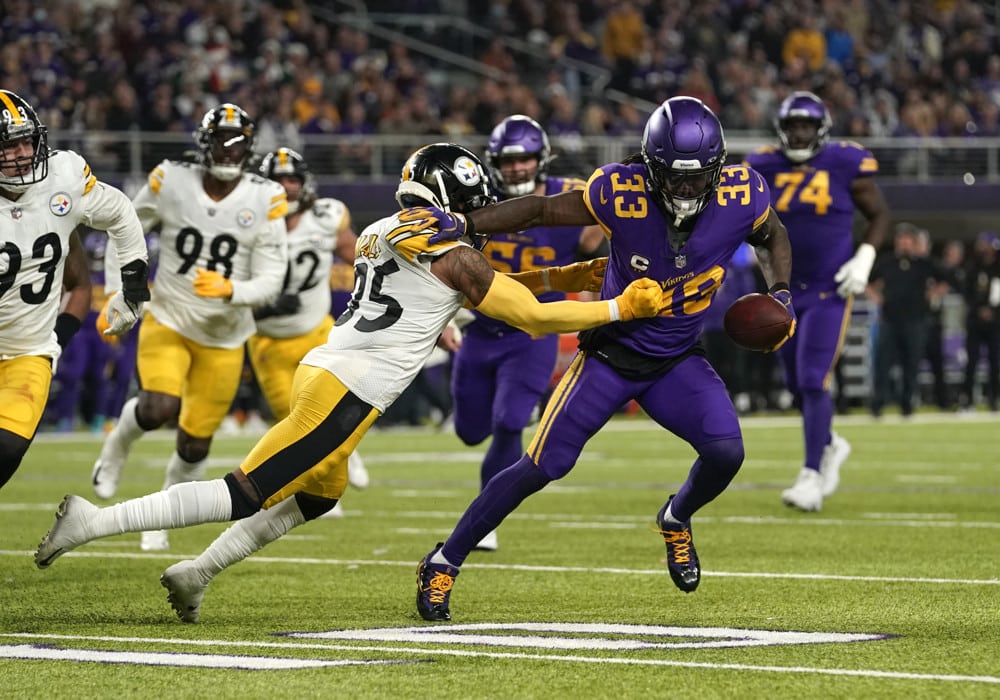 Personally, I do not trust veteran running back Dalvin Cook. This may be a bias based on the number of times I have drafted him in the first round, only to have him hurt for the season. But over the past three seasons, he has produced a decent amount of yards, scoring 25 TDs over the last three years. Obviously, 3rd-year wide receiver Justin Jefferson is a force to be reckoned with, producing 17 TDs in his 1st two years but do the Vikings have what it takes to push them all the way to 10 wins this season? Something they’ve only done four times in the last 11 years? I don’t believe so, at least not enough for me to bet the over here.

The Packers have been the face of the NFC North by winning the division seven times out of the last ten years. With only two Head Coaches coaches, Mike Mcarthy (2006-2018) and Matt LaFleur (2019- present), and one Quarterback, Aaron Rodgers, during that time period, you would assume they were winning Super Bowl after Super Bowl with this team. WRONG. They have only won once, and that was in 2011. The Packers seem to always be contenders with an incredible regular season up until the NFC Division Playoff game, where Rodgers is 1-5. By the NFC North Win Total odds, vegas highly suggest that the Packers will win the division. 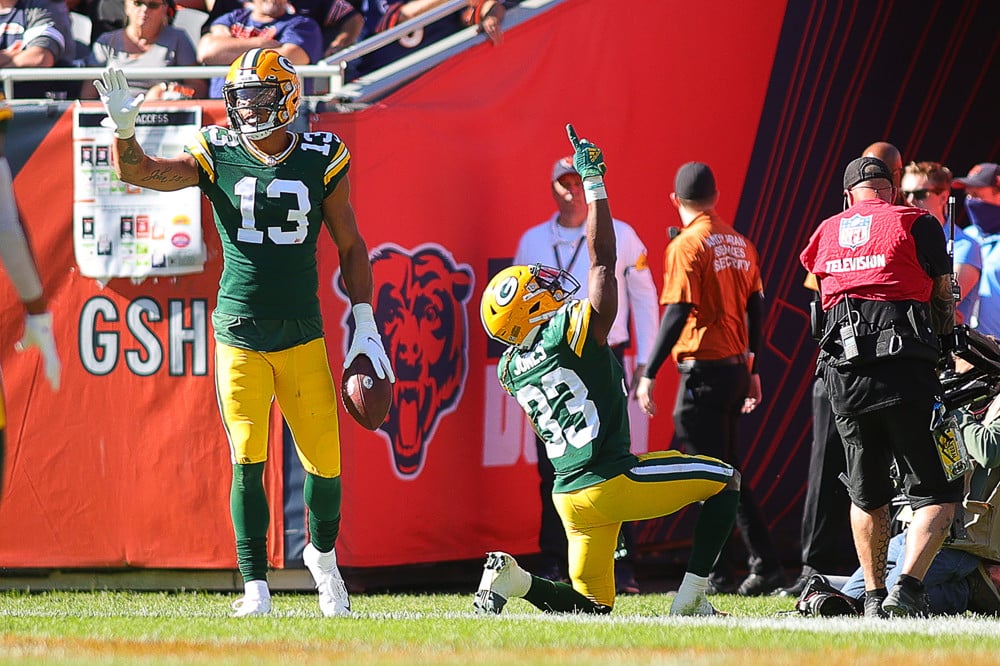 CHICAGO, IL – OCTOBER 17: Green Bay Packers running back Aaron Jones (33) celebrates with Green Bay Packers wide receiver Allen Lazard (13) and teammates after scoring a touchdown during a game between the Green Bay Packers and the Chicago Bears on October 17, 2021, at Soldier field in Chicago, IL. (Photo by Robin Alam/Icon Sportswire)

I’m calling this season the “Now or only Once” season for Aaron Rodgers, considering the front office has done nothing to help him in free agency or with drafting. He has virtually no offensive weapons. Aaron is used to working with a mediocre team around him, but he has been in the league since 2005. It seems that the clock is ticking for this Quarterback. Will we watch him ride into the sunset with one last victory, or will we have a Big Ben situation and hope he chooses to retire before he’s forced to be benched?

The Detroit Lions have not won the NFC North since 1993. Yes, the same year Beanie Babies were put on the market and the year Ground Hog day was released! Since 1993 the Detroit Lions have had 13 Head coaches, and none of these coaches have found outstanding success with the franchise. Many blame the Fords, some blame the weather, and others think it’s just a cursed franchise. The City was sad to see veteran Quarterback Matt Stafford leave. And to find immediate success in LA, but the team was at a standstill and needed a shake-up. 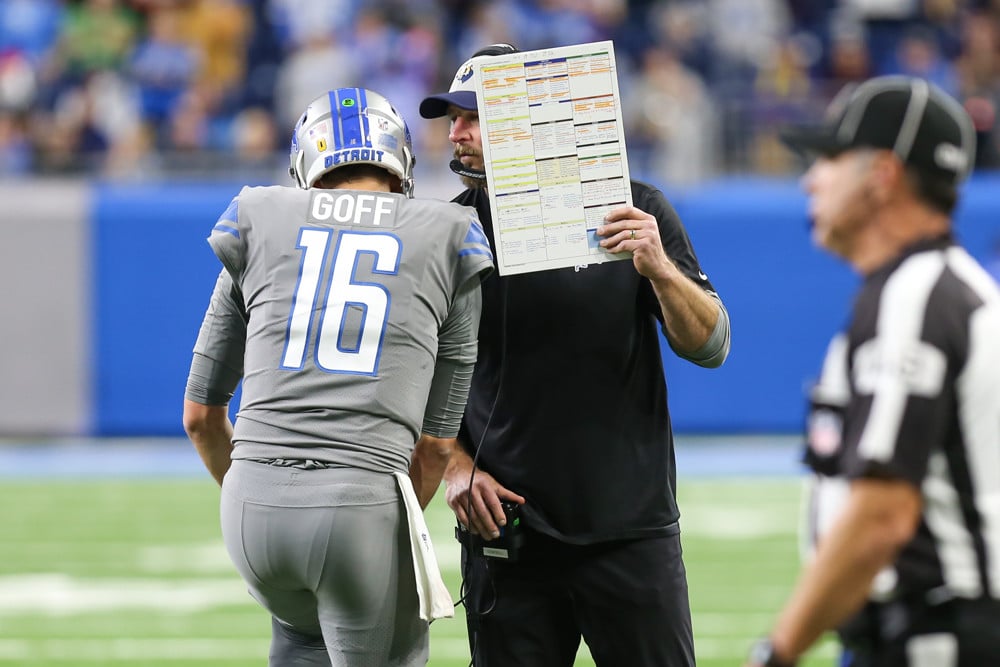 DETROIT, MI – DECEMBER 05: Detroit Lions head coach Dan Campbell talks to Detroit Lions quarterback Jared Goff (16) before the final play of the game during the fourth quarter of a regular season NFL football game between the Minnesota Vikings and the Detroit Lions on December 5, 2021 at Ford Field in Detroit, Michigan. (Photo by Scott W. Grau/Icon Sportswire)

Hiring Head Coach Dan Campbell and bringing in Jared Goff at Quarterback really feels like it is a step in the right direction. Campbell played for the Lions from 2006-2008; in his last season as a Detroit Lion Player, they went 0-16. This might sound discouraging, but I think it’s great that your head coach has been in the trenches with this city and wants to turn this team around. Jared Goff is a young Quarterback; the Detroit Lions, not being predicted dead last in the Division, is already a little win.

Chicago has unfortunately been the little brother to Aaron Rodger and the Green Bay Packers for the last decade, winning the division only once in 2018. Last season after Arron Rodgers danced on the graves of hopeful Bear fans. He yelled to the fans at soldier field, “I own you” how do the Bears come back from that? The fans hope the answer is new head coach Matt Eberflus, former defensive coordinator for the Indianapolis Colts. With a new head Coach and a very young Quarterback, Justin Fields, most are already calling this a building year for the Bears. This means that any success will be a pleasant surprise, and the city should be happy with any type of run the team may make. The expectations are low this year. 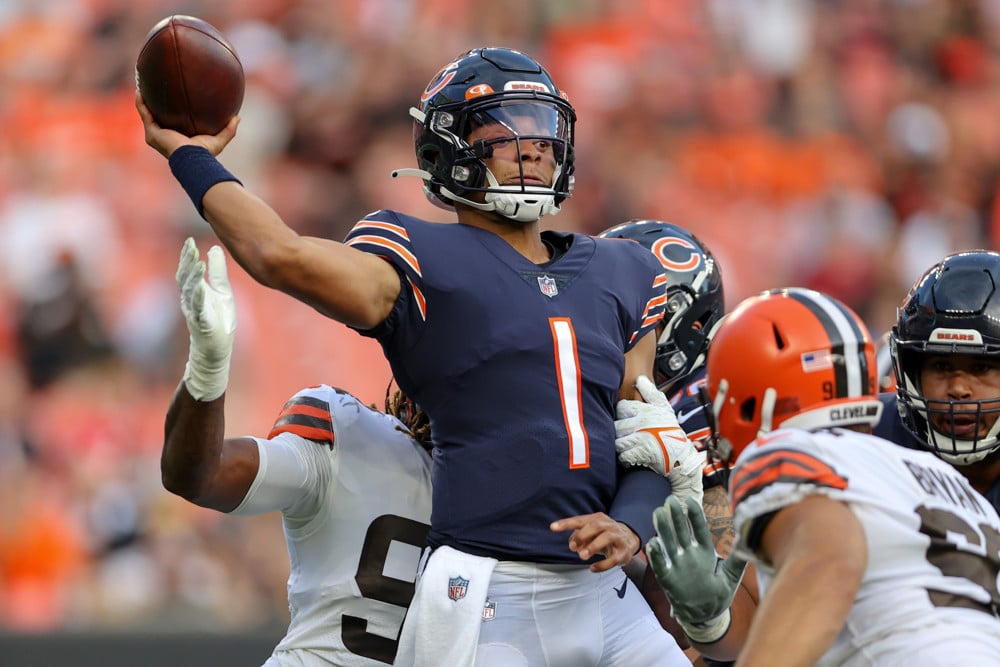 Chicago has always been more of a gritty team than flashy. I think in these down years is where they can find rising stars with their defense. They will need running back David Montgomery to have an +1000 yard season to take some of the pressure off Justin Fields. If Fields gets hurt, the season is over; they do not have the quarterback depth for injuries. But I remain hopeful for the Bears, so I am going over.