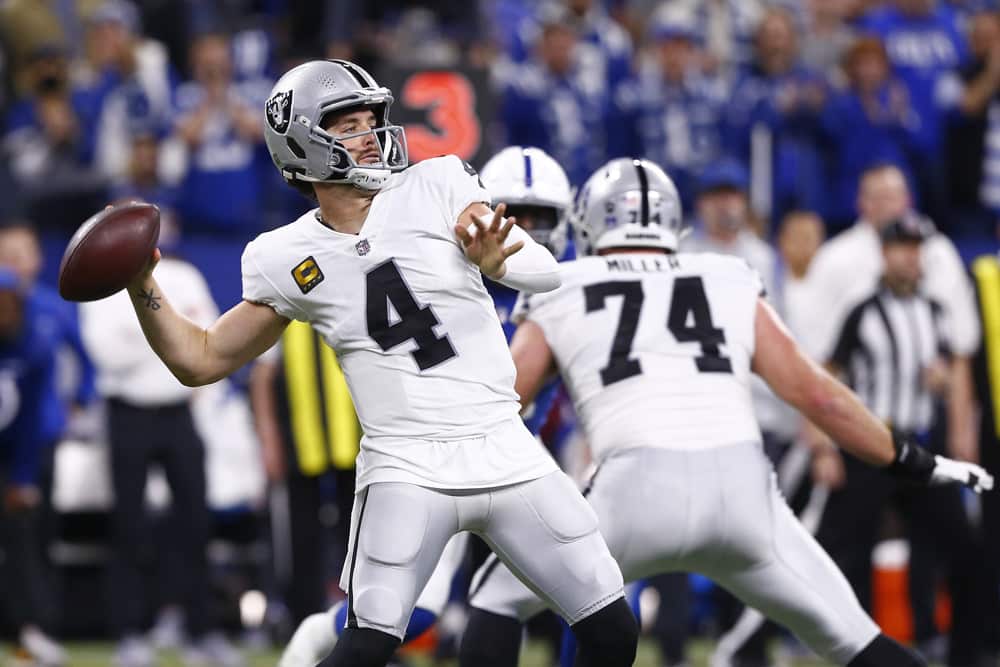 The value of the quarterback (QB) position can vary depending on your league settings. Your standard (1QB) leagues really decrease the value while the Superflex leagues increase the value of the position. For those who do not know, Superflex means that you have an extra flex position and in addition to being able to play an RB, WR, or TE; you are able to put in a QB.

First, let’s look at recent quarterback success to talk about what are some things we might look for in a breakout QB.

This is not only teams that attack down the field, but fast-paced as well as efficient offenses that result in a lot of plays. Don’t fall for the trap, the defense is bad so that is good for fantasy. It is to a degree, but that is not the case as those bad defenses keep the offense on the sideline too long and offenses that can’t convert on 3rd down go right back to the bench.

Almost all of the quarterbacks come from the top offenses and that is what you are going to look for. There will be 1 or 2 exceptions to the rule, but in general, you want a quarterback on a good offense.

So we know what we are looking for. Here are some tight-end breakout candidates for 2022.

Trey Lance is the most obvious even though there is still a very small chance that he does not start if the 49ers do not move on from Jimmy Garoppolo. Assuming Lance is the starter, which most people do. He is the ideal breakout candidate because of the environment around him.

This team has a strong defense and strong running game, with an elite play-caller. This is a team with a good offensive line and a plethora of weapons. All of that mixed with Lance’s ability to run the ball just scream fantasy production.

Remember when Trey Lance did this like five minutes into the Trey Lance era year 0? pic.twitter.com/PH9dNXCHhv

People will underestimate a good play caller and Josh McDaniels is just as important to Derek Carr as the addition of Davante Adams. Carr is one of the most accurate quarterbacks in the game while also ranking 5th in air yards last year.  Derek Carr has a real shot at jumping into the top 6 of fantasy quarterbacks this year with the combination of weapons he has.

Carr produced early in his career when he helped both Amari Cooper and Michael Crabtree go for over 1,000 yards. Carr was playing at an MVP level when he went down with a broken ankle. He has failed to reach this level of play until recently and appears to be set up for a career year.

Justin Fields is difficult because they have not done much around him to help support him. But, we saw Jalen Hurts finish as QB8 with only 16 passing touchdowns and only 3,144 yards. Fields could offer the same type of floor with his rushing ability. From week 5 on Fields played 95% of snaps in 7 games and averaged 51.6 yards rushing per/game. This is a pace of 877 yards per season which is in line with Hurts who ran for 784 in 15 games.

The biggest positive for Justin Fields this offseason was the addition by subtraction of Matt Nagy. We hope that the new coaching staff can help the development of Justin Fields. If they do, he’ll have positive fantasy production.

The Fields to Mooney connection is going to be ELECTRIC ⚡️ in 2022 pic.twitter.com/psddzp3k9d

You could put all of the QBs from the 2021 draft class on here, but of course, you can’t leave off the first one drafted. Lawrence had a rough rookie year and there is no hiding it. He was put into a toxic situation. Urban Meyer didn’t even make it to his first Christmas in Jacksonville before being let go.

Lawrence finished the season on a high note and the Jaguars went on a spending spree this off-season. The first move that the Jaguars did was to bring in Super Bowl-winning Head Coach Doug Pederson who has had success developing quarterbacks.

Pederson’s aggressive coaching style and close relationships with his players will be welcomed in Jacksonville. The improvements not only on the offensive line but with the skill positions should really help take some pressure off of Trevor. His ability to rush offers a safe floor and I would not be surprised to see Lawrence rush for over 400 yards in Pederson’s RPO style of offense.

Zach Wilson has seen an increase in his MVP votes since this offseason. This is more due to his recent off-of-the-field rumors. However, Zach Wilson is having one of the best offseasons both on and off the field. The Jets have had the most draft capital in the last two drafts and they not only used it to acquire Zach Wilson, but they added a lot of resources to this offense. The offensive line has improvements on the interior with the additions of Conner McGovern and Laken Tomlinson.

They also added what most would say was the top WR in the class, Garrett Wilson. The Jets were not done, they added the top Running Back as well. This offense has a lot of potential with 2nd year WR Elijah Moore and 2nd year RB Michael Carter already in the fold.

I spoke with Michael F. Florio about which WR you should be targeting in your Superflex redrafts for 2022. His response “Most likely I will not play the guessing game on either and I will probably just end up drafting Zach Wilson who will benefit from both.”

Tua had a tough season last year with all of the Deshaun Watson rumors and getting injured. He came back from injury and led his team on a 7 game-winning streak including beating the New England Patriots. The team was rumored to be eyeing Tom Brady as well and did not seem much invested in Tua. None of those quarterbacks ended up in South Beach, but Tyreek Hill did.

Tua was also able to get a new play caller. Mike McDaniel comes from the Kyle Shanahan tree. Which is a tree that has had a ton of success as of late. Particularly with quarterback play and the offense. Tua has had a defensive coach his entire career and in just 2 seasons had 3 different offensive coordinators. The additions of Tyreek Hill and Mike McDaniels have the signs pointing up for Tua who already has Jaylen Waddle.