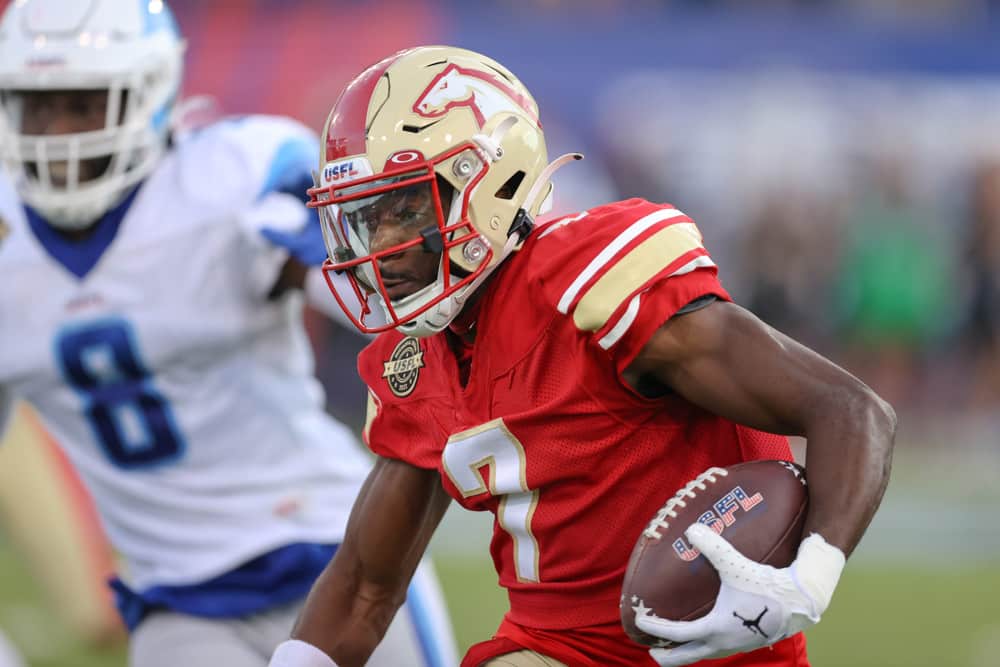 The USFL season opened with a bang on April 16th when the Stallions outlasted the New Jersey Generals in a thriller that came down to the wire. We didn’t know it then, but we were watching two of the best, if not, the best teams in the USFL. The Stallions and Generals would both go on to finish the regular season 9-1 and look like dominant forces the rest of the season. The anticipation is building as we preview the first USFL Championship game.

Opening night was J’Mar Smith’s coming-out party when he took a stranglehold on the starting QB position and never let it go. Fast forward two months, and now it’s championship week. The Generals were bounced in the first round of the playoffs by the hottest team in the playoffs, the Philadelphia Stars. The Stallions took care of business against the Breakers and are now set to take on the Stars on July 3rd for all the marbles.

The Stars are a fun story. Bryan Scott was an MVP front-runner when the season began only to be lost for the season in Week 3 due to injury. All hope seemed lost until Case Cookus took over the starting job and showed everyone he should have been a starter himself. Cookus would go on to lead the Stars to a 5-2 record in the last 7 weeks and a playoff berth. All great stories come to an end.

Championship week is where Cookus’ fairytale ends without a fairytale ending. As fun as the Stars have been, the Stallions have been the best team in the league from beginning to end, and for good reason. Losing one game all year is no fluke. Let’s dive into why the favored Stallions team (-4) will take care of business and take home the 2022 USFL championship.

The Stallions are a complete team on the offensive side of the ball. They are a better rushing team than they are passing. In terms of rushing production, the Stallions were only second to the extremely run-heavy New Jersey Generals. The Stallions ranked second in the league in attempts per game (30.4), rushing yards per game (135.7), and yards per rush (4.5).

Their 12 rushing touchdowns ranked third in the league. Their rushing production and success are indicative of a few things. They like to run the balls early and often and were in a position to play ball control and seal victories throughout the season. The Stallions were a relatively balanced team and ranked 4th in the league in passing. Though J’Mar Smith and the Stallions were second to last in completion percentage, they only averaged approximately 4 fewer passing yards a game than the league leader (Panthers).

The Stallions are a balanced team, yes but they go as their run game goes. The run game has gone through Bo Scarbrough since signing with the Stallions halfway through the season. He immediately took over the primary ball carrier duties and never looked back. Even though he only played five regular-season games, he was third in the league in rushing yards per game with 58.7. He did not take long to master the playbook and become the primary bell cow for the Stallions.

This should not be surprising given his NFL experience and moderate success at that level. If the Stallions are going to win this game I think Bo Scarbrough has to have a good game. The Stallions need to establish the run early and often. They need to allow J’Mar Smith to have easy windows to throw through off the play-action pass.

Remember when I mentioned the Stallions were a well-balanced team? Well, that applies to the defensive side of the ball too. They allowed the second least points per game, the second least rushing yards per game, and led the league in sacks. They gave up the fourth least passing yards per game and that number might have been lower if their opponents weren’t throwing the ball to try and come from behind so often.

The focus from @Y_DGates on this pick six 🔥

The @USFLStallions defense makes a big play once again

The Stallions are stout in many ways and at all levels of their defense. Linebacker Demarquis Gates was named to the all-USFL defensive team. Fan-favorite Scooby Wright likely would have had a chance to be named to the team if not for an injury-plagued season. No preview of the USFL Championship game is complete without mentioning the tenacious Birmingham Stallions defense.

I am not going to get cute here. Demarquis Gates has been the best player on the Stallions’ defense all season. That needs to continue in the championship game if they want to win. Gates was third in the league in sacks with 6.5, intercepted a pass, and tallied 62 tackles. The all-USFL linebackers’ incredible talent has already been on display in the playoffs.

Gates made his presence felt last week when he returned an interception for a touchdown against the Breakers. The Breakers actually outgained the Stallions by almost 100 yards last week. And if not for the pick-six by Gates that game is decided by one score or less. Gates needs to make his presence felt this week to keep the high-flying Stars offense in check.

There are not many players like Victor Bolden. JR. He makes his impact felt on both offense and special teams. Bolden has been a focal point of the Birmingham Stallions’ offense all season. He was second in the league in targets, third in receptions, and fourth in the league in receiving yards. Bolden, Jr. also ranked second in the league in yards after the catch only behind league MVP Kavontae Turpin. The Stallions make an extra effort to get him the ball as often as possible on screens, trick plays and the occasional designed run game.

THE FIRST KICK RETURN TD OF THE YEAR 🔥@vicbolden CAN FLY 🐎

If you missed it last week, Bolden broke a tie with the Breakers when he returned a kickoff for a touchdown to give the Stallions the lead. If Bolden is able to break off a huge kickoff or punt return this week, that could be the difference in the game.

As we preview this game, the Stallions are 4.5 points favorite heading into the USFL championship game against the Stars. The Stallions only lost one game all season. While the Stars needed a surprise 5-2 finished to push them over the edge and get them in the playoffs. Sometimes, the hottest team is the team that shocks the world and wins it all. In this case, I think an old cliché holds true. Defense wins championships. More specifically in football, defense and the run game wins championships.

I think this is where the Stallions really set themselves apart as the superior running team. The Stallions gave up the second least points in the league and the Stars gave up the third most. The Stars also have a habit of abandoning the run game and getting pass-happy which increases the risk for turnovers. The smart bet is to take the Stallions’ money line and against the spread.