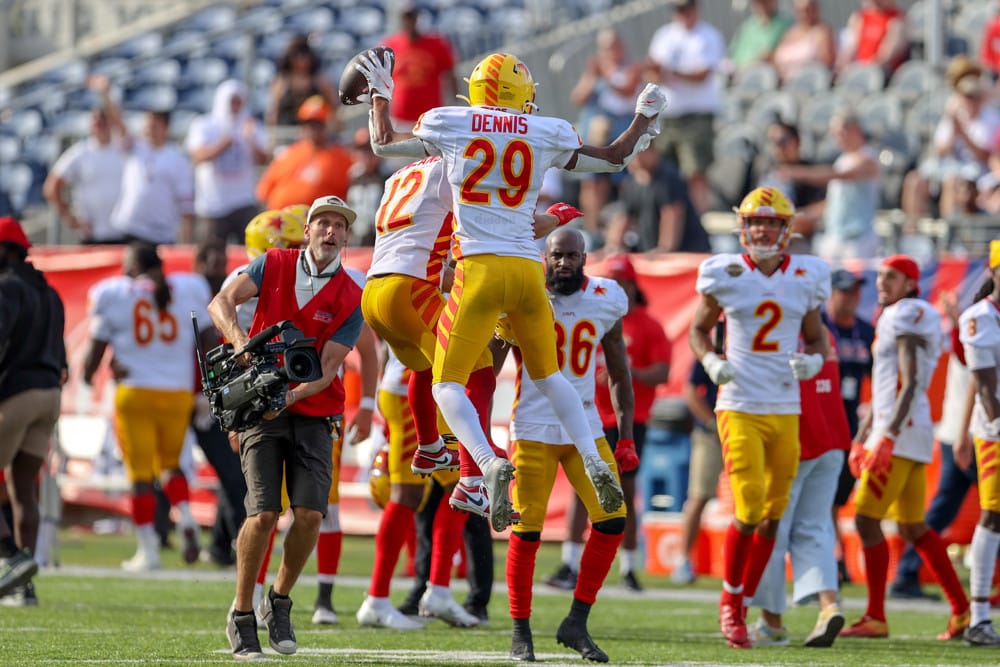 The Philadelphia Stars have made their fourth USFL Championship.  Pretty impressive given the fact that there have only been four USFL Championships.  Sure, one was as the Baltimore Stars, but it was still the Stars team.  They have won two of those and lost one.  Now, Bart Andrus will try to coach them to their third championship.  The Stars have been battling adversity all year.

“The goal was to be one of the top two in the division at the end of the regular season,” Coach Andrus said in a press conference Monday.  “(The players) accomplished that with two weeks to play.  That’s the way we approached (every week).  That our record is what it is.   Pro football is synonymous, any team can beat any given team on any given day. That’s the approach our guys take all year and I insist they keep that.”

Andrus has reminded the guys to have fun.  “Some place somewhere (the players) were introduced to a funny-looking ball with points on it.  The next day they went back to play with it because it was fun.  I never want them to lose sight of that.”  He also spoke about the adversity they have battled.  “They fought through a lot of adversity and came a long way.  I’ve told them lets respond through adversity, not react.  A response is a positive thing, a reaction isn’t always.  I’m very proud of them.  They’ve endured through a lot of challenges.”

The offense has been led by quarterback Case Cookus who took over in Week 4 for an injured Bryan Scott and has been able to improve every day.  He has put the team on his back, battled from behind in games, and led the team with confidence.  “Anytime you have momentum shifts, it’s important to stay calm.  One play at a time.  It doesn’t matter what sport,” Cookus said Monday.  “We can only control that next play.  We have a bunch of playmakers on offense that can all break out for big touchdowns at any point so I don’t think there’s ever a time where we’re too down on ourselves and focus on the play at hand.”

That calmness has appeared to be infectious as the Stars continue to win football games.  At Saturday’s playoff game they were the underdogs but led 10-0 at the half.  After going down 14-13 without much time left, they continued to play calmly.  With two minutes left, Maurice Alexander returned a punt for a touchdown to take a 19-13 lead.

Matt Colburn’s late-season surge has also helped the Stars.  On the year he ran for 457 yards and eight touchdowns. The receiving game was led by Bug Howard, with 371 yards, and Jordan Suell with 370 yards.  Those two combined for seven touchdowns.  Plenty of other receivers have helped out as well, including Chris Rowland, Diondre Overton, Devin Gray, and Maurice Alexander.  This whole group is a good reason why the Philadelphia Stars will win the USFL Championship.

All eyes will be on Case Cookus to guide this team to a victory on Sunday.  After Bryan Scott was injured, Cookus started seven games this year, throwing for 1,334 yards (fourth in the league), 12 touchdowns (second in the league), and only five interceptions (tied for third among starting quarterbacks).  He’s become known for sticking in the pocket and taking big hits to allow the play to develop.  Monday Cookus credited some of his toughness to his dad.

Cookus has also done an excellent job escaping pressure when he can’t find his receivers and making plays with his legs.  On the season he ran for 217 yards, averaging 9.9 yards per carry.  And while he only rushed for one touchdown, it was the second-longest run in the league all season at 79 yards.  Cookus is ready to lead this team to a victory.

“We started 1-0 last week, and now we get a chance to go 1-0 this week.  It’s always difficult to make it at any level.  Coach has talked a lot about that, the difficulties getting there.  Our goal all year was to get there no matter what our record was.  (We had) challenges this season – injuries, different rotations, etc., but each week, in and out, you have to try and go 1-0.”  Cookus is a big reason why the Philadelphia Stars will win the USFL Championship.

CASE COOKUS GOT THAT DAWG IN HIM!!pic.twitter.com/PULVv6up2w

The Stars’ defense on paper hasn’t been all that great, but the truth is they’ve made big plays when they needed to.  Saturday’s playoff game was perhaps their best when they held the General’s run game in check and forced multiple turnovers.  Nobody has been bigger at forcing turnovers than Channing Stribling, the Stars cornerback.  Stribling led the league this year with 7 interceptions.  He helps set the tone and swagger for that defense.  During previous in-game interviews, Stribling told reporters he baits quarterbacks to throw his way and is willing to give them a couple before he steps in for the interception.

Stribling isn’t the only leader on the defense as linebacker Jordan Moore was second in the league in assisted tackles and sixth in the league in overall tackles.  His contribution doesn’t stop there as he was also tied for 3rd in the league with sacks for the third most loss yardage.  “We eat together, train together, breathe together” he reminded everybody at Monday’s press conference.  This defense will be ready to help prove why the Philadelphia Stars will win the USFL Championship.

Even though Philadelphia has given up an average of 207.9 passing yards a game and 151 rushing yards, they continue to manage to get better.  Coach Andrus spoke to that on Monday saying “You hope as a coach and football team you get better every week.”  This defense is loaded with other playmakers as well like Ahmad Dixon, Amani Dennis, and many more.

A moment @USFLStars fans and players will never forget 🤩

Listen in on @AmaniDennis29's game-sealing interception that sent the Stars to the Inaugural Championship game 🔊🌟 pic.twitter.com/LvQy2yBoG5

While Adam Rodriguez, Jordan Moore, and many others have been contributing on defense, Channing Stribling has been the most impressive.  With his league-leading 11 pass breakups and seven interceptions, it has to be hard for quarterbacks to keep throwing his way.  Stribling has a ton of confidence on the field and it shows in his play.  While he exited the playoff game on Saturday with an injury, Monday he talked like he was ready to go.

He’ll certainly have his hands full with speedy receiver Victor Bolden Jr.  “Victor and I have actually trained together,” Stribling said in Monday’s press conference.  “This will kind of be like the old days where we practiced together.  It will be good.  It will be fun.  If there is any cornerback that’s going to be able to help limit Bolden’s explosiveness and impact on the game, it’s undoubtedly Stribling.  Watch for these two to continually battle to put their respective teams in the best position to win.  Stribling is the reason why the Philadelphia Stars will win the USFL Championship.

These two teams are similar when you break them down on paper.  They both have speedy receivers.  Both teams have excellent special teams returners in Victor Bolden Jr. and Maurice Alexander.  They are also both led by confident quarterbacks who have been leading their teams on the field and in the locker room.  And while I think the Stars should watch the Stallions-Breakers game tape and work to use Bug Howard the same way the Breakers used Sal Cannella, Bug isn’t my X-Factor.

So what is the X-Factor for the Philadelphia Stars to win the USFL Championship?  The defense.  If they can limit Bo Scarbrough and CJ Marable the Stallions will have to throw more often.  And then Channing Stribling can do what he does best and create turnovers.  The Stars only had one game all year where they had no interceptions and they averaged a league-high 1.3 interceptions per game.  They also had a league-high 31 sacks.  Few people look at the Stars’ defense as one of the best in the league, however, they will be the X-Factor and the reason why the Philadelphia Stars will win the USFL Championship.

We were on FIRE yesterday 🔥

Final Judgement:  Why The Philadelphia Stars Will Win The USFL Championship

With Cookus leading the offense and Stribling leading the defense, the Stars will win this football game and bring home the first Championship of The New USFL.  Through all the adversity they went through all year, including having a losing record when they lost their starting quarterback, to battling back and making the playoffs.  After that, the underdog Stars became the first team to beat the Generals in 10 weeks of football, ending their nine-game winning streak.

Now, facing the other 9-1 regular-season record football team, the Stars will once again be the underdogs.  A spot that they seem to like being and play well from.  If you think they are going to have their hands full, just listen to Coach Andrus.

“They (the players) will be ready on Sunday.”