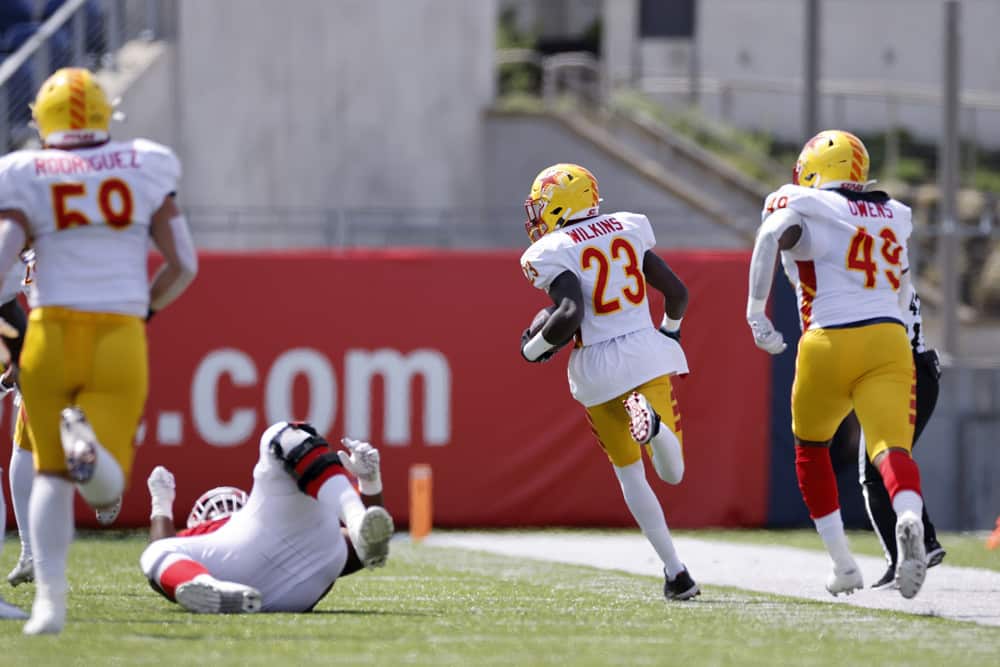 As the television audience waited for the USFL Semifinal game to return from the two-minute warning, the fans at Tom Benson Hall of Fame Stadium heard the public address announcer come on the speakers. He announced that Generals’ wide receiver and returner Kavonte Turpin had his return named the Play of the Game. Turpin had been largely contained on offense but broke loose for a 78-yard return touchdown.

All of this was happening as Maurice Alexander of the Philadelphia Stars was back deep preparing to field a punt. Alexander and the Stars trailed 14-10, and the clock was against them. The punt was low and had little hang time, Alexander scooped it up and promptly outdid Turpin’s return with an electric 88-yard touchdown return.

TOUCHDOWN OFF THE PUNT RETURN 🔥@_hardtime3 PUTS US BACK ON TOP 👏👏

Quarterback Case Cookus had been on the sidelines getting ready to lead the potential game-winning two-minute drill. When asked about how he felt about Alexander’s return he said, “easiest two minute drive I’ve ever been a part of.”

Football is a game that comes down to opportunities. Capitalizing on turnovers. Converting scoring opportunities. Creating mismatches. Today’s first USFL semifinal game was defined by these opportunities and ultimately, the Philadelphia Stars capitalized on more opportunities than the New Jersey Generals and won a back and forth game 19-14.

Players on both the Stars and Generals expanded their case that they belong on NFL rosters on Saturday. League MVP Kavonte Turpin and Stars returner Maurice Alexander both showcased dynamic playmaking abilities on special teams. Darius Victor showed off his hard-nosed running ability that helped him earn USFL Offensive Player of the Year honors.

Defensive playmakers on both sides of the ball showed up and balled out as well. Mazzi Wilkins and Amani Dennis both had key interceptions for the Stars that kept the Generals out of the endzone. The New Jersey Generals’ defense also gave the Stars fits as Mike Bell Jr. picked off Cookus and Toby Johnson, and Chris Orr, and Hercules Mata’afa all recorded sacks.

Philadelphia started the action with a balanced attack mixing effective Case Cookus passing with Matt Colburn runs. Cookus and the Stars easily marched 42 yards in ten plays. Once inside Generals’ territory, the New Jersey defense stiffened and the Stars had to settle for a Luis Aguilar field goal.

The Generals came out on their second possession and immediately looked to Darius Victor and their rushing attack to establish a rhythm. Victor ran for 3 yards on the clock-chewing drive and Luis Perez mixed in some well-timed throws to move New Jersey down to the Stars’ 28.

Disaster struck for New Jersey as Perez came under heavy pressure and was intercepted on third down. The play stood despite an initial flag for pass interference that was picked up after Mike Pereira reviewed it.

Case Cookus and company promptly took over at the Generals 13 and two plays later Cookus carried a defender across the goal line on a scramble to give Philadelphia the momentum and a 10-0 lead.

TOUCHDOWN 🥳@CaptainCookus10 takes it himself! 🔥

The Stars’ defense flexed throughout the first half but stood tall when necessary and consistently big plays in the shadow of their own endzone. New Jersey dominated the time of possession in the first half. The Generals held onto the ball for 18 minutes but came away with zero points. Much of that came in the second quarter as the Stars only had their offense on the field for 1:41.

The Stars came out of the locker room ready to take control of the game and forced a fumble on the opening kickoff. Cam Echols-Luper slipped for the second time on a kickoff return and lost control of the ball. Philadelphia promptly recovered to set up their offense with another short field for Cookus and company.

Philadelphia attempted to capitalize with an end-around receiver pass by Maurice Alexander, but could not hit the home run play they were looking for. After Matt Colburn was knocked down and headed to the sidelines, Case Cookus was intercepted after he made a disastrous throw while being hit.

.@SupaScoob in the right spot at the right time‼️ OUR BALL

Big Plays Move the Chains, but Grit gets Paid

The Generals utilized their platoon system at quarterback on the ensuing drive, but Luis Perez was the one who made the biggest impact. After De’Andre Johnson was on the field for a few run plays, Perez hit a wide-open Darrius Shepherd streaking down the near sideline.

Darius Victor, the USFL Offensive Player of the Year, capped off the Generals’ drive with a hard-nosed one-yard run. His tenacious run jump-started New Jersey and put them back in the game only trailing 10-7.

TOUCHDOWN‼️🎖@yungvitov gets us on the board 👏

All season Victor has been the guy who gets the ball in clutch situations and whenever the Generals had to get a yard. His tough play and willingness to do it all has endeared him to fans, coaches, and teammates.

With Cookus and Colburn both banged up, it fell to backups KJ Costello and Darnell Holland to lead the Stars’ offense. Philadelphia appeared to not be missing a beat as they quickly drove deep into Generals’ territory. Costello hit Chris Rowland on a deep route for a 43-yard gain that seemed to swing momentum back in the Stars’ favor.

Just as the Stars’ seemed to be ready to regain a double-digit lead, Darnell Holland coughed up the football after an almost effortless seven-yard gain. Holland seemed to be almost surprised as Paris Ford delivered a ferocious shot to the running back.

That would be our ball‼️

Case Cookus came back on the next drive and quickly brought the stars down to the Generals’ eight-yard line, but could not get the Stars into the endzone. Luis Aguilar missed his 26-yard field goal and the score stood at 10-7 Stars to start the fourth quarter.

Kavonte Turpin has been an explosive player all year, a threat to score whenever he touches the ball, and the USFL’s MVP. He showed that electric playmaking ability early in the fourth quarter as he took an Aguilar punt 78 yards for a touchdown. His return touchdown gave the Generals their first lead of the day 14-10.

That's why he's the league MVP 🔥

Another look at that massive punt return TD by @KaVontaeTurpin

Despite looking rattled at times on his previous two drives, Case Cookus regained his composure and marched the Stars down the field. Cookus attributed his return to the medical staff getting him loose and his teammates for helping to pick him up. However, the New Jersey defense stood tall and forced another short Aguilar field goal. He converted this time to cut the New Jersey lead to 14-13.

The Stars’ defense then held strong and forced the Generals to punt the ball away with 2:00 remaining in the game. And that was when Maurice Alexander made it clear he and Philadelphia were not done as he took his punt 88 yards for a touchdown. The following two-point conversion attempt failed and kept the Stars’ lead at 19-14.

It appeared that the Generals’ would have a chance to win it on a late touchdown drive, but ultimately they could not capitalize on their final opportunity.

What They are Saying

When asked about the Stars’ Defensive performance Mike Riley said, “They [the Stars] did a nice job keeping us off-balance. We were never able to get the run game going today and just could not make the plays.”

Later he was asked about his decisions to go for it twice on fourth and short and Riley said, “Hoping no one brought that up. I should have known better than that and taken the points. I got greedy and should have taken points. That’s on me. Worked in the second half, but that’s what happens when you’re chasing a bad decision.”

In his opening statement, Andrus said, “Really proud of my football team. They didn’t listen to a lot of noise that was going on out there. They believed in themselves and put together a game that was strong enough to win. Very proud of them for what they did.”

When Cookus was asked about Maurice Alexander’s game-winning punt return Cookus said it was as if Alexander knew he needed to one up Turpin’s earlier return. He also said it was almost like, “Maurice says ‘here hold my beer'” before taking the kick to the house.

Alexander was asked if this was the biggest moment of his career and he said, “By far. On this stage, with these guys, on national television and to be able to help my team. Huge moment.”

Andrus, Alexander, and Cookus all made note of how the Stars were often perceived to be the underdogs, and that just made them play harder.

We will all be waiting to see if that chip carries over into the USFL Championship Game on July 3.

Three Who Made an Impact

The USFL is all about opportunities as well. It is providing opportunities on the field for players who have missed out on catching on at the NFL level but clearly have the talent and drive to play professional football.

Alexander was a late addition to the USFL draft pool, but Mike Riley made it clear he wanted Alexander from the start. He said he asked for extra time during the draft so his wide receivers coach could check the tape. It’s a good thing they got the extra time because Alexander punched the Stars’ ticket to the first USFL Championship Game. His electric fourth-quarter return was the difference-maker for Philadelphia.

Case Cookus, who started the season as the Stars’ backup, played efficiently from opening kick to closing whistle. He opened the game with a physical eight-yard run for a touchdown in the second quarter. He also mixed in several deep shots down the field with precision passes short to move the chains. Despite being banged up in the third quarter, Cookus returned to the field and kept the Stars’ offense on track.

Big-time players make big-time plays and MVPs step up when it matters most. Kavonte Turpin proved that as he took a short punt by Aguilar 79 yards for a touchdown. Turpin has shown time and time again that he is an electric player who can break open a game at a moment’s notice. The Generals made it a focal point to get Turpin involved, but it was his contribution on special teams that broke the game open.