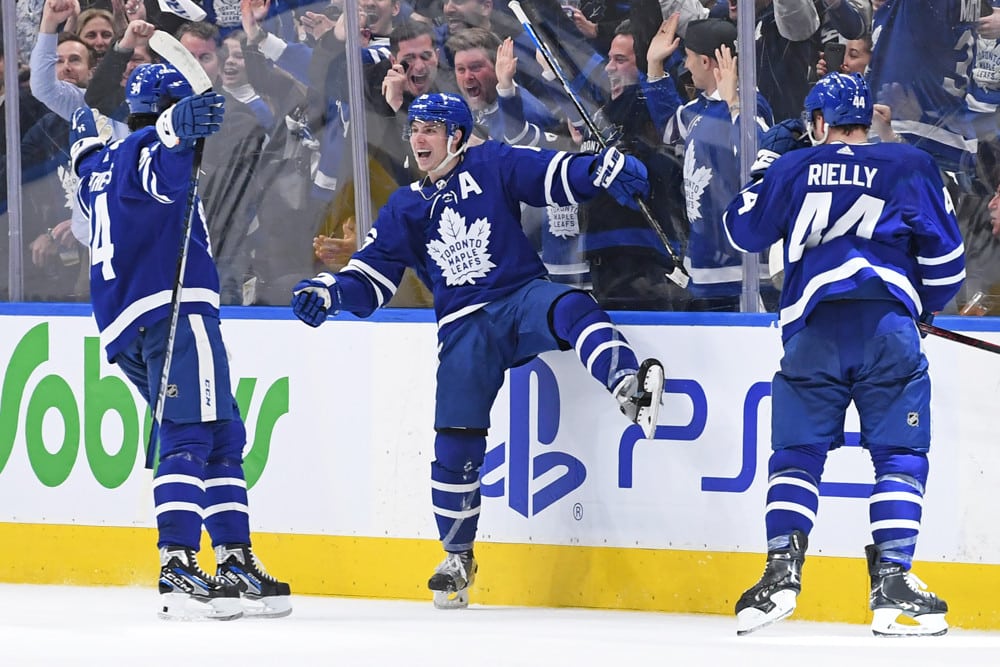 The NHL Stanley Cup Playoffs are not disappointing! We’ve had a long overtime game, a few back-and-forth affairs, and a few top teams flexing their muscles. Things get interesting tonight with the Game 3s getting underway, meaning that the home-ice advantage is shifting. Let’s get into our NHL Playoffs Picks and DraftKings DFS Stacks, Goalie, and Lineup for tonight!

The series shifts to Boston after two big home wins by the Hurricanes. Carolina dominated the Bruins in the regular season and that continued in the first two games. But it’s hard to win on the road in the playoffs.

On top of that, there are even more questions in Carolina’s crease. Frederik Andersen is still out, Antti Raanta left Game 2 in the first period and is questionable after skating on Thursday, so it’ll likely be Pyotr Kochetkov again in Game 3. The young goalie played well in relief, making 30 saves on 32 shots in the victory. He also didn’t back down from Brad Marchand.

The Bruins are favored and I think this is the do-or-die game for Boston. There’s not much hope for the B’s if they fall behind 3-0 to the Hurricanes. They’re going with Jeremy Swayman in net, but it may not make a difference.

I think the Bruins should be able to sneak a win or two in this series, but I’m not -130 confident in Game 3. I’ll take the plus money on both the side and total.

This series is not disappointing. Toronto made a statement in Game 1, but Andrei Vasilevskiy and the Lightning bounced back in Game 2, as they always do. The series now goes back to Tampa Bay with both the game and series winner at pick’em odds.

It’s been a back-and-forth series between these Central Division rivals. The Wild played well in Game 1 but were shutout 4-0 by Ville Husso and the Blues. They bounced back in Game 2, however, with a decisive 3-0 lead after the first period and 6-2 final score.

Home-ice advantage is huge in the playoffs and that is once again the way I’m going in this game. The Blues were 26-10-5 at home this season and the home team has won six of the last eight meetings. In fact, the Blues are 7-0-0 at home against the Wild since 2020, outscoring them 35-16.

I said that it was time for the Oilers’ big guns to put up or shut up in Game 2, and they definitely put up. Leon Draisaitl opened the scoring, Connor McDavid had two assists, and Evander Kane picked up three points (two goals, one assist). Mike Smith rebounded from his Game 1 gaffes for a 30-save shutout.

The pressure is off of the Oilers (for now) and they have the blueprint for how to beat the Kings. Los Angeles may get a boost from its home crowd, but it wasn’t too beneficial in the regular season. The Kings went just 21-16-4 at home this season while the Oilers had a similar road record of 21-15-5.

Edmonton is the better team and the Oilers should take control of the series against a Kings team without Drew Doughty (out for season) and Viktor Arvidsson (questionable).

Auston Matthews blasts a power-play goal for his first of the playoffs! pic.twitter.com/kqTDd0h5tM

Bunting rounds out the line. He missed Game 1 with an undisclosed injury, but scored a goal in 15 minutes in Game 2. For $3,900 he’s a good option to round out the stack and take the average price down to a more manageable $6,967.

I’m going with a Blues stack again, but with a wrinkle. We have Schenn and Kyrou joining Krug this time.

Schenn seems to be a steal at only $3.3k. He had 59 points (24 G, 34 A) in 62 regular-season games and picked up a power-play assist in Game 1. He was also robbed on the power play in a frustrating Game 2. Schenn centers the third line with Kyrou and is on the second power-play unit with Kyrou.

Kyrou gives us some exposure to the top power-play unit. He’s also been productive for the Blues with 75 points (27 G, 48 A) in 74 regular-season games and a power-play goal in Game 2.

Krug didn’t find the scoresheet in Game 2 after picking up three assists in Game 1. He did have four shots and a blocked shot for 7.3 FPTS, which isn’t a bad floor. Krug hit 7.3 FPTS or higher in four straight games and eight of his last nine –– including 18.4+ in three of those games.

At just over $4,100 per player, I’ll take this value stack that gives us exposure to both power-play units and a duo on the third line.

DraftKings DFS: Final pieces to round out the lineup

Brodie is near the minimum price and has a solid floor as a second-pair defenseman. He should get a few blocks and could pick up a point for a dynamic Leafs team.