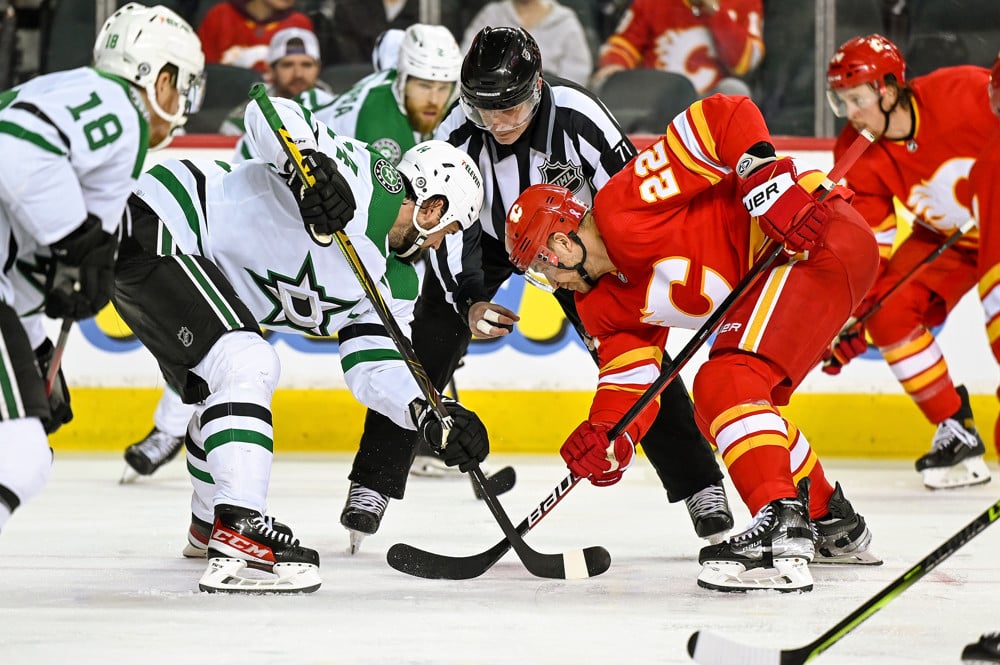 The NHL Stanley Cup Playoffs are here! We’re going through each first-round NHL Playoffs series with predictions, betting odds, schedule, picks, and best bets. And we’ll have plenty of other NHL content for you throughout the Stanley Cup Playoffs, so keep an eye out for that. Let’s just get right into it with the Pacific Division, previewing Calgary Flames vs. Dallas Stars, and Edmonton Oilers vs. Los Angeles Kings with odds, the schedule, picks, predictions, best bets, and more!

*Wednesday, May 11: Stars at Flames, TBD

The Flames caught fire in the second half of the season. They went 20-13-6 through the first 39 games, then had a 10-game winning streak that sparked a 30-8-5 record in their final 43 games. Calgary clinched the Pacific Division on April 21st, so none of its games after that really mattered, which is when two of its 13 second-half losses occurred.

It’s going to be an uphill battle for the Stars for sure. Dallas won the first meeting of the season in Calgary, 4-3 (OT), on November 4th, but the Flames won 4-3 in Dallas on February 1st during their 10-game win streak and again 4-2 at home on April 21st to clinch the Pacific Division.

Why the Flames will win

The Avalanche are the hot topic in the Western Conference, but the Flames should be right there as well. Calgary has been terrific since February and has very few holes in its lineup. The last two meetings are likely more representative of how these teams have been playing this season.

The Flames’ top line is one of the best in the league and they have good depth pieces to supplement that. Blake Coleman joined Calgary after winning two straight Stanley Cups with the Lightning, so he knows what it takes to win.

Calgary is the big favorite in this series for a reason. The Flames should have no trouble dispatching the Stars, especially given Dallas’ home/road splits.

Why the Stars will win

However, Dallas has a knack for showing up when you least expect it. You can never count the Stars out. They battled all the way to the end, going 3-0-1 in their last four games to overtake the Predators for the first Wild Card spot (sure, Nashville may have choked, but that was only made possible by Dallas’ strong finish).

Oettinger is a great young goalie and the Stars have some hungry veterans looking to make a run. Mind you, this Stars team made the Stanley Cup Final just two years ago. If the youngster can steal a game or two in Calgary, the Stars could use their home cooking to douse the Flames.

It’s really hard to bet against the Flames in the past few months, and that continues into the playoffs. I’m not comfortable laying the -300 (or higher) juice, so we have to look at another angle for this series.

The Kings got the better of the Oilers early in the season with a 5-1 win in Edmonton on December 5th, but the Oilers won the last three meetings: 5-2 in LA, 4-3 (SO) at home, and 3-2 in LA on April 7th. Despite the Oilers winning three of four matchups, only their first victory was decisive. The last two, both within the last 15 games of the season, were close one-goal games.

The Oilers have the two best players in the series, but can the Kings’ experience lead to an upset?

Why the Oilers will win

Connor McDavid, Leon Drasiaitl, and the Edmonton Oilers are looking to win their first playoff series –– and game (if you don’t count the qualifying round in 2020) since 2017. They got swept last year by the Jets, lost to the Blackhawks 3-1 in the qualifying round in 2020, and missed the playoffs in the previous two years. However, they’re back and perhaps better than ever as they enter the postseason.

McDavid (123 points) and Draisaitl (110 points) have been carrying the Oilers for years and this season was no different. Each player had more points than the team’s third- (Zach Hyman, 54) and fourth- (Ryan Nugent-Hopkins, 50) leading scorers. However, the Oilers made the polarizing decision to sign Evander Kane, who put up 39 points in 43 games for Edmonton. Jesse Puljujarvi (36 points in 65 games) and Kailer Yamamoto (41 points) also had their moments.

The Oilers usually lose on their depth, defense, and goaltending. Mikko Koskinen was the team’s starter for most of the season, but Mike Smith has returned from injury and played surprisingly well. Smith is 14-7-1 with a .921 SV% since February 8th, and won nine straight starts with a .951 SV% to close out the season.

Why the Kings will win

The Kings are back in the playoffs for the first time since 2018, when they got swept by the Golden Knights. They last won a playoff game in 2016, losing in five games to the Sharks. They haven’t won a playoff series since winning the Stanley Cup in 2014.

However, a few of the pieces from that Cup-winning team are still on the roster. Unfortunately for Los Angeles, Drew Doughty is out for the season. But they still have Anze Kopitar, Dustin Brown, and perhaps most importantly, Jonathan Quick.

The Kings also picked up Viktor Arvidsson and Phillip Danault in the offseason. Arvidsson has added some top-six scoring with Danault bringing a good two-way presence after making the Stanley Cup Final last season with Montreal.

If the Kings are going to win, they’re going to have to shut down McDavid and Draisaitl. Luckily for them, they have just the matchup centers to do it. Kopitar is one of the best two-way guys in the league, shown by his two Selke Trophies. He’s getting up there in age, but he knows how to turn it on for the playoffs. Kopitar may be able to minimize the damage from the Oilers’ top line, and Danault could take the second line. He played a perfect shutdown center last year for the Canadiens.

The Kings have a chance to pull off the upset given their experience, and the Oilers’ experience of choking.

The Oilers are a great team. Actually, scratch that. The Oilers have two fantastic players and a few good players around them. Mike Smith has played well, but he can combust at any moment. Last year’s sweep is going to be in the back of Edmonton’s minds and the Kings really come in with nothing to lose.

Los Angeles to win the series at +200 (or higher) is going to be my bet in this one. The Oilers haven’t proven enough to warrant their -250 price and I don’t feel comfortable taking them on the game spread. If you want to get a bit risky, Kings -1.5 (+320) could be a play or even Kings -2.5 (+260). Los Angeles could win one of two games in Edmonton and then take control at home.