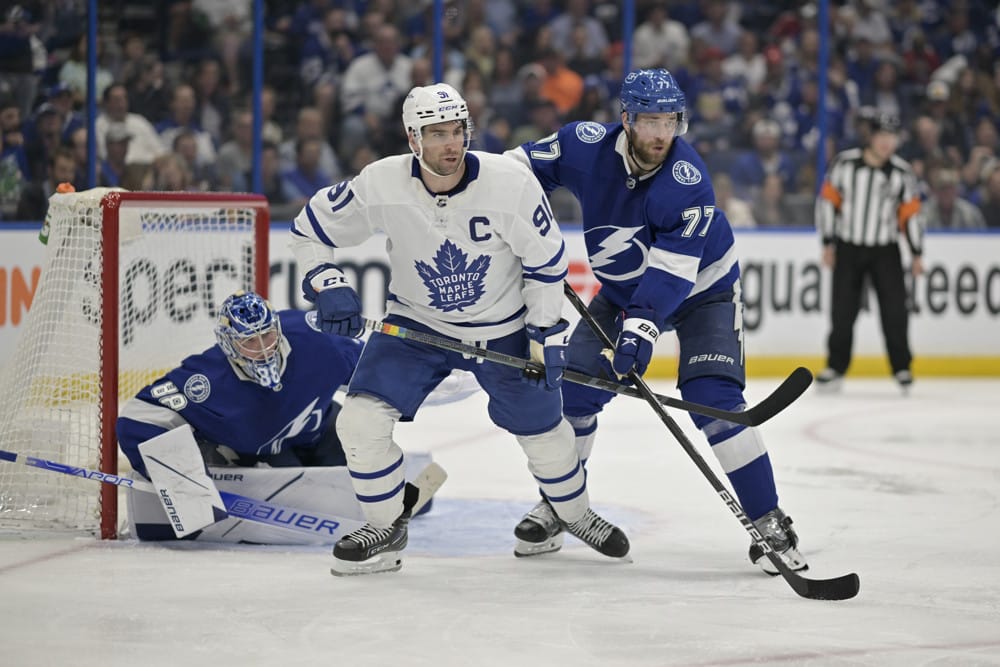 The NHL regular season is in the books and the Stanley Cup Playoffs are here. The NHL Playoffs and chase for the Stanley Cup begin on Monday, May 2nd with the Stanley Cup Final ending no later than June 30th. It’s nearly two months full of exciting and intense hockey action. We’re going to be previewing every NHL Playoffs series with predictions, betting odds, schedule, picks, and best bets. And we’ll have plenty of other NHL content for you throughout the Stanley Cup Playoffs, so keep an eye out for that. Let’s just get right into it with the Atlantic Division, previewing Florida Panthers vs. Washington Capitals, and Toronto Maple Leafs vs. Tampa Bay Lightning with odds, the schedule, picks, predictions, best bets, and more!

*Wednesday, May 11: Capitals at Panthers, TBD

*Sunday, May 15: Capitals at Panthers, TBD

The Panthers come in as the odds-on favorites to win the Eastern Conference. They won the Presidents’ Trophy with 122 points, three more than the Colorado Avalanche. Florida has dominated at home this season (34-7-0) and will have home-ice advantage for as long as they last in the playoffs.

On the other hand, the Capitals are stumbling into the playoffs as Alex Ovechkin deals with an injury. Washington lost its four last games of the season and five of its last six, missing out on third place in the Metropolitan Division by three points. Ovi should play, but him potentially being at less than 100% is going to be a storyline to watch in this series (and these playoffs).

Why the Panthers will win

It’s fairly simple. They’re the best team in the league for a reason. Florida was already one of the most-feared teams in the East (and league) and then they added Claude Giroux, Ben Chiarot, and a few other depth pieces at the trade deadline. Jonathan Huberdeau had an eye-popping 115 points (30 G, 85 A) with Alexander Barkov (39-49–88) and Sam Reinhart (33-49–82) playing over a point-per game as well. Hell, even Claude Giroux had 23 points in 18 games with Florida.

Florida is a huge favorite in this series for a reason. The Cats shouldn’t have an issue getting past Washington after beating the Caps in two of three meetings this season.

Why the Capitals will win

The Capitals have strong veteran leadership with guys that have won the Stanley Cup before. The Panthers are lacking that with a few notable veterans (Joe Thornton, Giroux, etc.) chasing their first Stanley Cup. Florida has also seen some issues in goal this season. Sergei Bobrovsky had a .913 SV% overall, but had long stretches of inconsistent play. From January 23rd to April 8th, he went 14-3-0 but had a .887 SV% with 58 goals allowed in 19 games.

If the Capitals are going to pull off the upset, it’s going to be on the backs of their leaders. Washington will need to play a playoff-style game and hold on to any leads they can get so the Comeback Cats can’t strike in the playoffs.

Having said all of that, you can’t bet against Florida in this series –– well, sprinkling something on the Capitals at +300 (or higher if it keeps climbing) could be worth a stab. However, I’d prefer to take the Panthers series spread. They should win both of the first games of the series on home ice, maybe drop one in Washington, and then close it out back at home in Game 5. At the very least, they should get it done in Game 6 for a 4-2 series win.

Toronto Maple Leafs (A2) vs. Tampa Bay Lightning (A3)

This is going to be a fantastic first-round series. It’s the team that can’t get out of the first round –– but is built to (and some say is destined to) –– against the two-time reigning Stanley Cup champions. Neither side can be particularly happy with this draw, but that’s just the way the cookie crumbles. Both the Maple Leafs and Lightning are going to have to be on their game in this series.

The Maple Leafs and Lightning split their four-game season series. Toronto won 2-1 (OT) on November 4th and 6-2 in Tampa Bay on April 4th  –– maybe they’re destined for a win in Game 2 on May 4th? However, the Bolts won 5-3 in Toronto on December 9th and made a statement with an 8-1 home win on April 21st.

Why the Maple Leafs will win

Auston Matthews scored 60 goals (106 points) in just 73 games, including 51 goals in 50 games from late November to early April. Mitch Marner finished with 97 points in just 72 games. Even William Nylander had 80 points, with John Tavares adding 76. If the Leafs are going to win this series, their big boys are going to have to show up.

Jack Campbell showed promise early in the season, earning himself an All-Star appearance. He still finished the season with a .914 SV%, but struggled mightily from January 15th to April 14th (10-4-2, .871 SV%, 63 goals against in 18 games). Campbell finished the season with a 20-save shutout and 116 saves on 123 shots (.943 SV%) in his last four games, and that will need to carry into the playoffs for Toronto to get out of the first round for the first time since before the 2004-05 lockout.

These also aren’t the same Lightning that won the past two Cups. They’ve seen many of their depth pieces leave due to salary cap issues and that could be their Achilles’ heel in these playoffs.

Why the Lightning will win

Why will the Lightning win? Because they’ve won eight straight series over the last two playoffs and only lost 13 games across those eight series. That’s incredible. They only went to Game 7 once and Game 6 three times besides that. They’ve won half of their last eight series in just five games.

While the Lightning don’t have the same depth, they have the same core. Steven Stamkos had 106 points, Nikita Kucherov had 69 points in just 47 games (23 points in nine games to close out the season), and Brayden Point had 58 points in 66 games. Alex Killorn actually stepped up nicely with a career-high 59 points.

The Lightning know how to win and the Maple Leafs know how to lose. Toronto does have home-ice advantage in this series and that may make some difference as the Leafs went 31-8-2 at home and just 23-13-5 on the road. Tampa Bay had similar splits (27-8-6 home, 24-15-2 road). However, I can’t bet against the Lightning; especially at plus money.

Take the Lightning (+105) as underdogs to win their ninth straight playoff series (and the Leafs to lose their seventh straight). And given Tampa Bay’s knack for closing a series out in six games or fewer, Lightning -1.5 (+180) could be worth a sprinkle. Try Lightning to win 4-2 (+450) if that tickles your fancy.