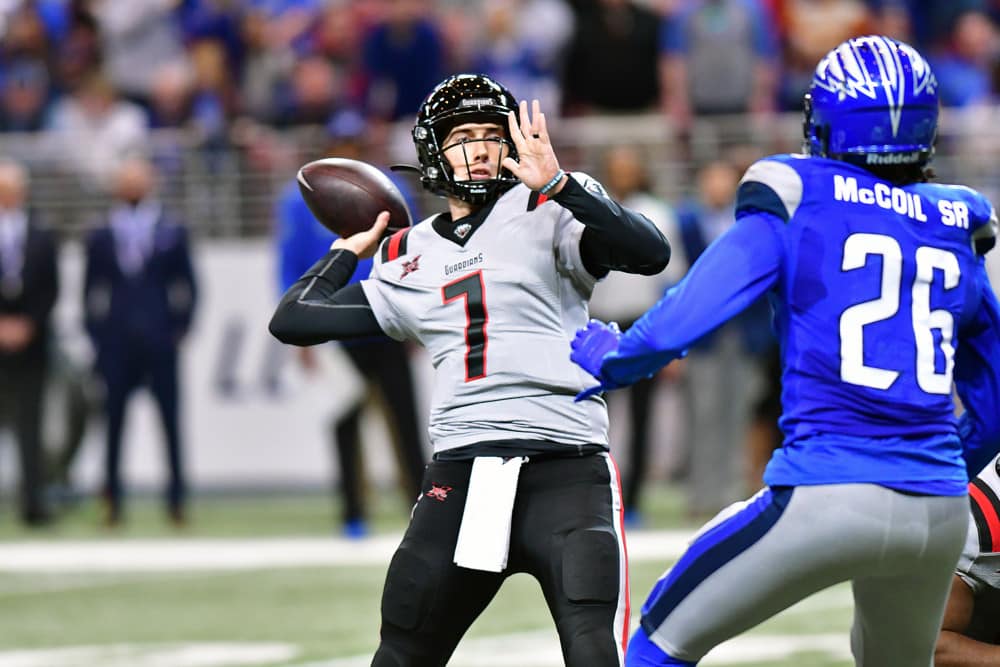 The opening USFL Week 1 kickoff is six days away.  What was once rumor and speculation turned into announcements of the new league forming.  Then came the draft that included 12 rounds on Day 1 and the other 23 rounds on Day 2.  Players reported to camp, transactions have been made and we have all been waiting.  And finally, the wait is almost over and the USFL Week 1 games are almost here.  It all starts on Saturday with the opening prime time game, followed by three games on Sunday.  This is the start of a 10-week regular season, to be followed by the playoffs.  All games will be played in Birmingham this year, with the playoffs taking place in Canton, Ohio.  Maybe you haven’t been able to keep up with the USFL.  Don’t worry, we have you covered with our USFL Week 1 betting odds, picks, and predictions.

The USFL Week 1 opening game takes place on Saturday and is a prime-time game on three different networks.  This game sees the only team that will have home field advantage all year, the Birmingham Stallions, take on the New Jersey Generals.  However, the biggest question surrounding this game is which quarterback will get the start for the Generals.  The more well-known Luis Perez joined the team after Ben Holmes suffered a broken toe, but De’Andre Johnson was their original backup quarterback.  I think Johnson gets the nod to start first.  And he’ll look to get the ball to Kavontae Turpin and J’Mon Moore early and often.  The Stallions, led by Alex McGough have a stronger looking run game than pass game at first glance.

All eyes and pressure will be on these two teams to make an exciting debut.  Generals’ head coach Mike Riley will look to coach his team against Stallions’ head coach Skip Holtz.  And both coaches have experience and want to start their debut in the USFL with a win.  While the Stallions look to have a stronger run game, I think the Generals will have a better passing game on Saturday, April 16th.  Look for their defense to limit McGough’s opportunities and their offense to move the ball.  The under total points in all these games are appealing to me because it is Week 1 and the teams have had limited time to prepare.

USFL Week 1 football continues on Easter Sunday, starting with the Houston Gamblers and the Michigan Panthers.  Jeff Fisher makes his USFL coaching debut as head coach of the Panthers.  They surprised everybody at the draft when they took Shea Patterson with the number 1 overall pick.  They also lost wide receiver, Quincy Adeboyejo, who many thought would be a Top 10 receiver.  Although Fisher may try to surprise us, allowing Patterson to open the field up and throw deep to receivers Lance Lenoir and Ray Bolden, I think they’ll lean more on their run game.  Running back Stevie Scott is a strong rusher out of Indiana who has a chance to lead the league in rushing.

The Gamblers are expected to be led by former Northwestern quarterback Clayton Thorson.   And while Thorson threw for 61 touchdowns, he also had 45 interceptions.  However, Thorson can throw on the run as well as run the ball, running for 27 touchdowns in college.  He’ll look to connect with receivers Isiah Zuber and Jojo Ward as well as experienced tight end Brandon Barnes.  Even though the backfield looks a little crowded, they have three talented rushers in Devwah Whaley, Dalyn Dawkins, and Mark Thompson.  If the passing game doesn’t open up, look for both teams to rely heavily on the run.  Because of the emphasis on the run for both teams, it’s another under I like.  Furthermore, I think the Gamblers could surprise a lot of people in Week 1, while the Panthers may have some more work to do.

The third game of the weekend will see the Philadelphia Stars face off against the New Orleans Breakers.  Larry Fedora, head coach of the Breakers, will look to turn around the career of quarterback Kyle Sloter who never gained enough traction in the NFL.  Sloter still has a lot of development to be had after only starting his senior year of college at Northern Colorado.  After that, he bounced around the NFL on multiple teams.  Fedora is known for utilizing three wide receivers in his offense, but the question will be if the group can keep up with the pace of other teams.  What appears to be the thinnest team in the USFL will have its hands full.

One of the players I’m most excited to see play in the USFL Week 1 debut is Philadelphia Stars quarterback Bryan Scott.  He’s been a proven winner everywhere since college and has performed in leagues at a high level.  Scott has a slew of tall receivers in Brennan Eagles, Jordan Suell, and tight end Bug Howard.  However, he also has a quicker receiver in Devin Gray.  The Stars may have the most put together roster as the running back room is led by Paul Terry and Darnell Holland.  Both have big-play ability as well as experience playing Spring League football.  This is the lowest total of all four games, but it still seems appealing, given the minimal prep teams have had.  The Stars scrimmage game against the Panthers from the league’s own form of a preseason ended 16-14.

The USFL Week 1 kickoff ends with a Sunday night primetime game between the Tampa Bay Bandits and the Pittsburgh Maulers.  In most of the USFL futures bets, I’ve seen the Bandits are one of the favorites and the Maulers are one of the biggest underdogs.  Therefore, the line only being at 2.5 seems off.  And much of the hype surrounding the Bandits is mainly hype around quarterback Jordan Ta’amu.  Many of the player rankings for fantasy football have him etched in the top spot.  He’ll have three receivers with a little NFL experience to throw to in Derrick Willies, Rashard Davis, and 5th round draft pick Jordan Lasley.  Let’s not forget he will also be throwing to The Invincible’s Vince Papale’s son Vinny Papale.

The Maulers look to have one of the strongest defenses on paper in the USFL.  Also, it appears that they have strongest rushing attack in Garret Groshek and Madre London.  Coach Kirby Wilson, a former running back coach, will likely run the ball early and often in a ground and pound attack that focuses on controlling the clock.  They’ll rely on Kyle Lauletta when they opt to throw the ball, which I imagine will often come off a play-action.  However, Lauletta will have 6-5 receiver Branden Mack and 6-5 tight end Marcus Baugh to chuck the ball up to.  Since I feel the Maulers will rely more on the run game, I like the under.