The 2022 USFL entry draft is complete. The rosters are set, it’s now time to assess. The New Jersey Generals Draft was a success for Mike Riley’s crew overall. They landed one of the better quarterbacks in the class, along with some solid skill position players around him. Along with this the Generals defensive roster shaped up very nicely. Let’s look at the roster as a whole below.

No matter the level of play this is the most important position on the field. The Generals nailed the draft here. Ben Holmes originally from Orchard Park, New York attended Tarleton St. where he threw for over 5000 yards and 62 touchdowns. He also displays some mobility when needed, he did produce a 500 yard rushing season in 2018. To back him up they added De’Andre Johnson. Who was on the same Sea Lions roster in 2021 as Ben Holmes. He has a ton of talent, however, he struggles with consistency and has a history of off-the-field issues.

One of the best running back rooms in the league was assembled by the Generals. Mike Weber produced over 2700 yards rushing at Ohio State in three seasons. While averaging over six yards a carry and scoring 24 touchdowns. He possesses breakaway speed and solid vision. Add in his 5-11, 211-pound frame and you get a workhorse back. He will lead this backfield. However, Trey Williams will make a great one-two punch. He brings veteran leadership, playing in the NFL, CFL, XFL, and AAF. Along with more receiving history and kickoff return abilities. This will be one of the strongest positions on the roster for the Generals. It was certainly one of the best round in the New Jersey Generals Draft.

This group of receivers has two players over six feet in J’Mon Moore and Randy Satterfield. They both bring the size and the ability to climb the ladder. J’Mon Moore had two 1000 yard seasons at Missouri. He also found the endzone 21 times in his college career. He would go on to be drafted in the fourth round of the NFL draft by the Packers in 2018. Unfortunately, he mostly returned kicks that season and caught two passes for 12 yards.  As far as Randy Satterfield, he posted over 800 yards and 11 touchdowns for Lyon college in 2019.

The other three receivers bring good speed and separation skills. Chris Platt produced over 1900 yards in 5 seasons at Baylor. While Kavontae Turpin produced 1338 yards for the Horned Frogs. However, showed a decline in production after a stellar freshman year where he scored 9 of his 16 career touchdowns. As for Darrius Shepherd, he produced a 1000 yard season for the Bisons in 2018 as well as scoring 9 touchdowns. He would be named the Most Outstanding Player of the 2019 NCAA Division I Football Championship Game win over Eastern Washington. In his 14 career NCAA playoff games, he made 37 catches for 591 yards and five TDs.

Both Tight Ends bring dual skill sets to the Generals roster. Both have good soft hands in the receiving game as well as good blocking skills. Brandon Bowman bounced around the NFL from 2016 to 17, however, he never stuck. In 2019 he joined the Birmingham Iron, producing 43 yards and a touchdown on 6 targets. On to the giant himself Nicholas Truesdell, who stands 6-7, 246lbs. With much more experience I expect him to be the day one starter. the 31-year-old has 11 years of pro experience spread out between the NFL, IFL, AFL, AAF, and most recently the XFL. He has one of the greatest catches of the season for the Vipers. 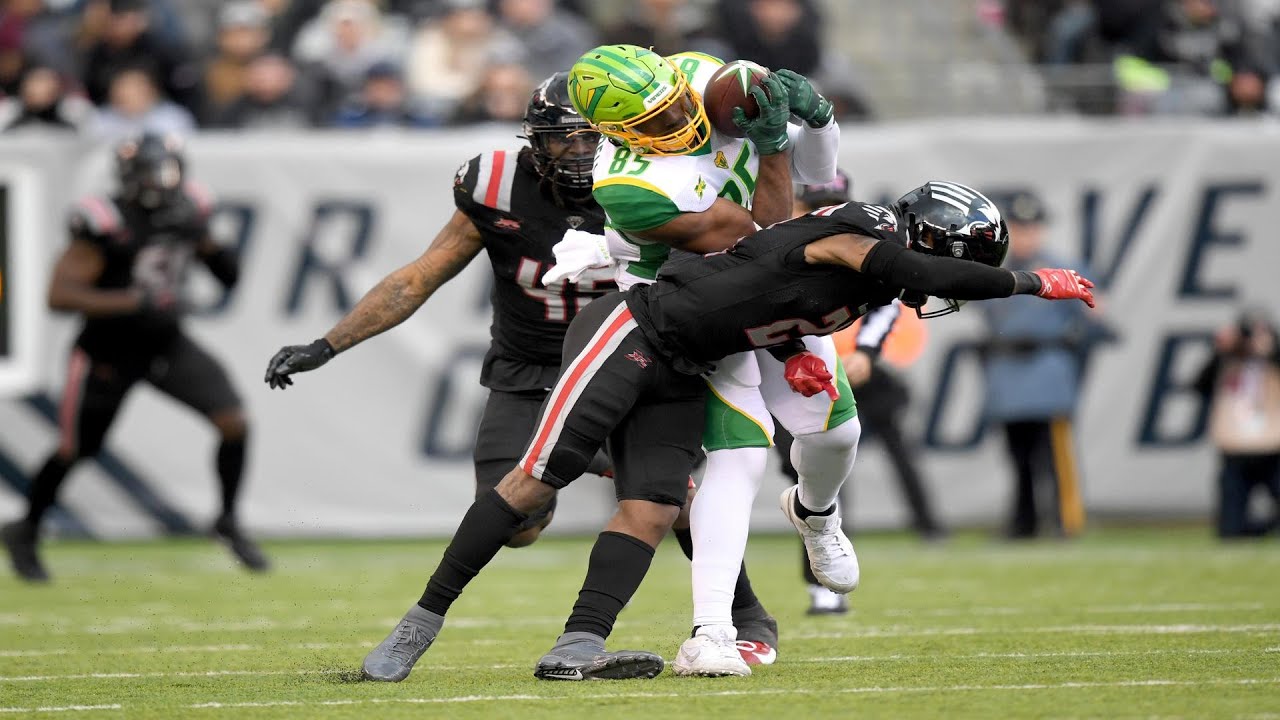 The cornerstone of any roster is the offensive line, and I believe the Generals have built a solid one. I believe you see Garrett Mcghin and Calvin Ashley start at the tackle positions. Garrett Mcghin is 6-6 302 pounds and played 48 games at Eastern Carolina, 12 of which were at right tackle. He then spent time with the Bills and Jaguars.  Calvin Ashley is a former five-star recruit who had issues outside of football forcing him the step away. The talent is there for these two, the question is are they ready for the moment. Terry Poole the 7-year professional vet will add veteran leadership along with depth behind them.

As we move to the interior Evan Heim and Mike Brown are in line to start at the guard positions. Mike Brown stands 6-3, 348 pounds, and played 25 games for the Mountaineers starting all 10 in 2020 at right guard.  Evan Heim appeared in 54 games for Minnesota State. As a Senior he was named First-Team All American in D2. The guy anchoring the line is Jake Lacina out of Augustana College. He started in 45 games at center for the Vikings.

The key pieces to this defensive line will be Bryson Young, Kolin hill, Destiny Vaeao, and Toby Johnson. I think these will be the starting four. Both Toby Johnson and Destiny Vaeao stand 6-4, 300 plus pounds. These big boys will clog the middle of the defense. Both have professional experience in the NFL and XFL. Destiny Vaeao played three seasons for the Eagles in which he appeared in 33 games and totaled 27 tackles, 3 sacks, and 5 quarterback hits. Kalani Vakameilalo is a big boy standing 6-3, 322 pounds. He will hold his own as a rotational player, at Oregon State he totaled 75 tackles and 6 sacks.

As we look to the pass rushers, the top player is former Oregon Duck Bryson Young. He brings length and speed to the edge. While in Eugene he totaled 72 tackles, six for loss, and added two sacks. Not to be outdone Kolin Hill will be playing the opposite side. This former Red Raider totaled 112 tackles, 17 for loss, and 8 sacks in his college career. He also showed the ability to get his hands up with 8 passes batted. The wild card of the group is Malik Hamner, who dominated at Jackson State winning the MVP in 2018 and 2019. He earned a spot in the Jaguars’ minicamp until an injury derailed his hopes. Now he is healed up and looking to prove he still has what it takes to be a dominant edge defender.

These three linebackers have good size, however, aside from D’Juan Hines have little professional experience. Hines totaled 171 tackles, 8 for loss at Houston, this led him to the NFL in 2018 where he played in 13 games for the Browns and recorded 4 tackles.  Angelo Garbutt produced 245 tackles at Missouri state in three years, along with 4.5 sacks. All after transferring from Iowa. Tim Walton Jr was a transfer himself leaving Syracuse in 2017 for Texas Southern. He would go on to produce 24 tackles, a half a sack, and 2 forced fumbles. These three create good depth on the roster at the linebacker position for the New Jersey Generals.

I couldn’t think of a more perfect fit for the center of the Generals defense.  Chris Orr out of Wisconsin made his name through physicality and toughness. He added good speed and athleticism as well. Over his four years at Wisconsin, he recorded 188 tackles, 21 of which were for a loss. Also, he added 15 sacks, 11.5 in his senior year. If this wasn’t impressive enough, he had two interceptions, one for a touchdown, and three forced fumbles. He will prove to be a great addition to the New Jersey Generals Draft Generals roster.

The New Jersey Generals Draft made it clear that they prioritized size and experience at the corner position. All four of these guys are over six feet and have pro experience. De’Vante Bausby has the most NFL experience seeing the field in 4 seasons. Over that span, he played in 26 games and totaled 60 tackles. He will be the primary lockdown corner of this group. Trae Elston bounced around the NFL from 2016-2019, he appeared in 13 games for the Bills in 2017 where he had 1 interception and 18 tackles.

David Rivers also had a stay in the NFL from 2017-201, he only appeared in 3 games and did not record any stats. In 2020 he joined the XFL where he played for the Guardians and Battle hawks. As for Dejuan Neal, he spent this past preseason with the Commanders, after a stay in the XFL with the Guardians.

Both safeties bring a ton of experience at the professional level to the Generals’ roster. Dravon Askew-Henry is the most decorated of the pair. He totaled 215 tackles in his 5 years at West Virginia. This is where he displayed an ability to play in the box and as a coverage safety as well. He signed undrafted with the Steelers in 2019 and saw no game action. He then moved on to the XFL where he played 5 games and recorded 12 tackles. His new safety partner Shalom Luani had a longer stint in the NFL. He played in 31 games totaling 28 tackles for multiple teams. This includes the 2019 Seahawks in which he appeared in 3 games.  These two should make a reliable pair on the backend of the New Jersey Generals’ defensive roster.

From Kicker U, Texas University Nick Rose has spent his pro career bouncing around. He only appeared in 10 games in 2017 for the Commanders and the Chargers. Making 11 of 14 field goal attempts and setting his career-long of 55 yards. He also made 23 of 26 extra point attempts. The Generals added a reliable leg to the roster here.

Appearing in 25 games for Army Scott Flanick snapped for both field goals and punts. However, never factored statistically.  He stands 6-2, 235 lbs, and was a multi-sport athlete in High School. Long Snapper is not a super exciting position but I believe the New Jersey Generals Draft added a nice piece here to round out the roster.