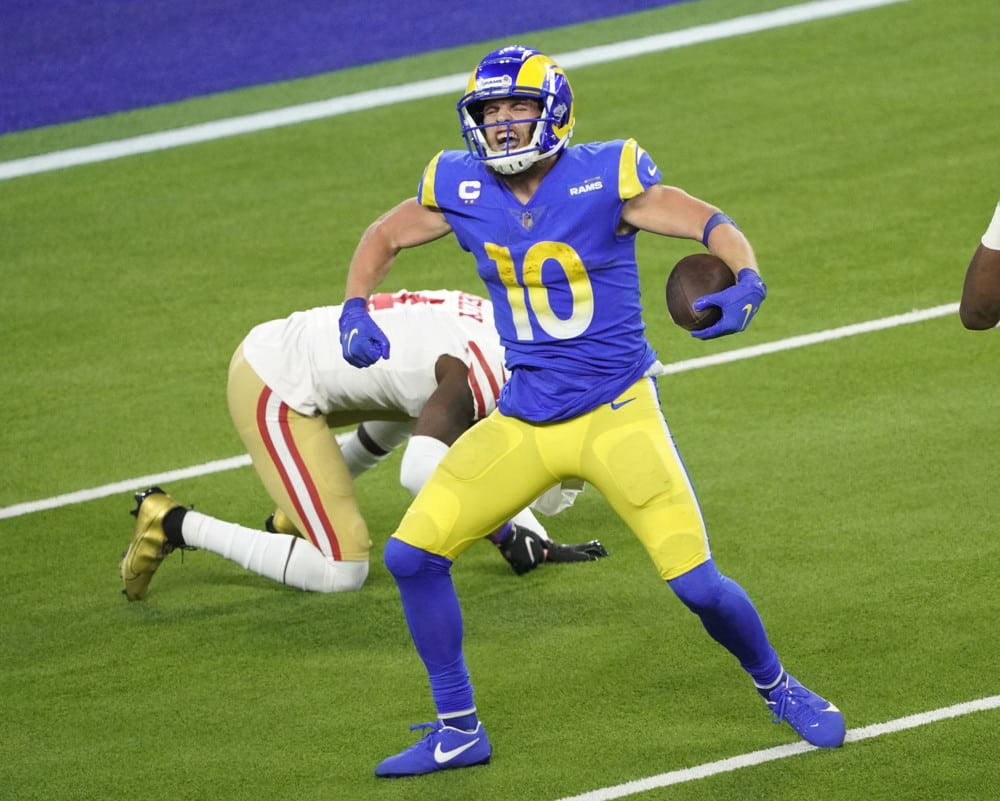 Unfortunately, we have come to the end of another fun and exciting NFL season. Luckily, the final game is the biggest one of them all as the Rams take on the Bengals in the Super Bowl. There’s a lot to like on both sides so let’s take a look at some of the top options and pivots for your lineups.

Death, taxes, and Cooper Kupp getting 20+ DraftKings points. There’s no one more consistent in the game right now than Kupp. He’s registered at least 20 DK points in 16 of his 20 games played this season.

With your Captain spot, you generally want to take the player with the highest raw points projection. Kupp is that guy this Sunday. The Bengals were near the bottom of the league in pass defense according to Football Outsiders during the regular season, but have been much better in the playoffs. Even so, Kupp is matchup-proof. He has seen 32 total targets in the Rams three playoff games and will once again be leaned on heavily in this game. Fade Kupp at your own risk.

Just an unbelievably clutch play by Matthew Stafford & Cooper Kupp. Cooper Kupp is your MVP as far as I’m concerned, and he went up against the best Defensive Back from Tampa Bay during the most crucial offensive play. Effortless throw from our franchise QB! What a thriller! pic.twitter.com/h6mNh6GQLh

Both Tee Higgins and teammate Ja’Marr Chase both have as much upside as Kupp, but I’ll go with Higgins here to save some salary. Higgins and Chase have been neck and neck with their aDOT and Target% this season. The two also had similar red zone usage during the regular season. The only difference between the two is that Chase caught eight more touchdowns. With the Rams likely to put up points in this one, the Bengals will be forced to air it out again and Higgins will be a big part of the Cincinnati attack.

The man they call “Joe Brrr” has been cool under pressure during these playoffs. With the Bengals 4-point underdogs, the likeliest scenario has Cincinnati forced to come from behind. That means Joe Burrow will be chucking it around to his talented group of receivers. The defensive matchup will be the toughest one the Bengals QB has faced so far, but he clearly has the talent to come out on top.

It goes without saying, but any lineup you make this Sunday should have one or both of these quarterbacks in it. They’re such integral pieces to their respective offenses. Both players will be playing in their first Super Bowl so we’ll see if nerves are a factor, but if the playoffs have been any indication, Matt Stafford isn’t going to shy away from the big stage. Out of the two, my lean would be towards Stafford because the Rams pass more in the red zone than the Bengals, giving him a better chance at putting up some TDs.

The Bengals’ other Joe has been getting a lot of buzz and deservedly so, but let’s not forget about Cincinnati’s star RB. Joe Mixon has seen 22, 21, and 24 touches in each of the Bengals’ three playoff games. Whether they’re trailing or leading, Mixon remains a part of the game plan. With a lot of the attention going towards Burrow and his wideouts, Mixon makes an interesting pivot for your Super Bowl DraftKings, Showdown, and DFS lineups.

Ever since joining the Rams, OBJ has become a big piece in Sean McVay’s offense. The wide receiver has seen 23 targets so far in the playoffs, getting a season-high 11 against San Francisco in the NFC Championship game. Make no mistake, Cooper Kupp remains the alpha dog among Rams wide receivers. However, with his role in the offense solidified, Beckham Jr. should see enough volume and opportunity to potentially have a monster day.

Would love to see McVay get Odell Beckham more open in space to create some yards after catch during this post season. OBJ had this 40 yard catch and run in the win against Arizona pic.twitter.com/f5wED8czRN

If Tyler Higbee can’t suit up on Sunday, Kendall Blanton will again find himself in an every-down tight end role with the Rams. He caught all five of his targets against San Francisco. The Bengals were also one of the more leaky teams against tight ends during the regular season. At his salary, it won’t take much for Blanton to pay off his price.

McPherson hasn’t been the most reliable kicker in the NFL this season. However, it’s hard to argue with what he’s done of late. Evan McPherson has 10 or more DraftKings points in nine of his last 10 games. If you need a salary-saving cash game option with a solid floor, the Bengals kicker makes a great selection. McPherson has been money all offseason and could carry your Super Bowl DraftKings Showdown DFS lineup to victory.

It should be a phenomenal game between two teams that can get up-and-down the field. Good luck and let’s get some sweats going on Sunday!