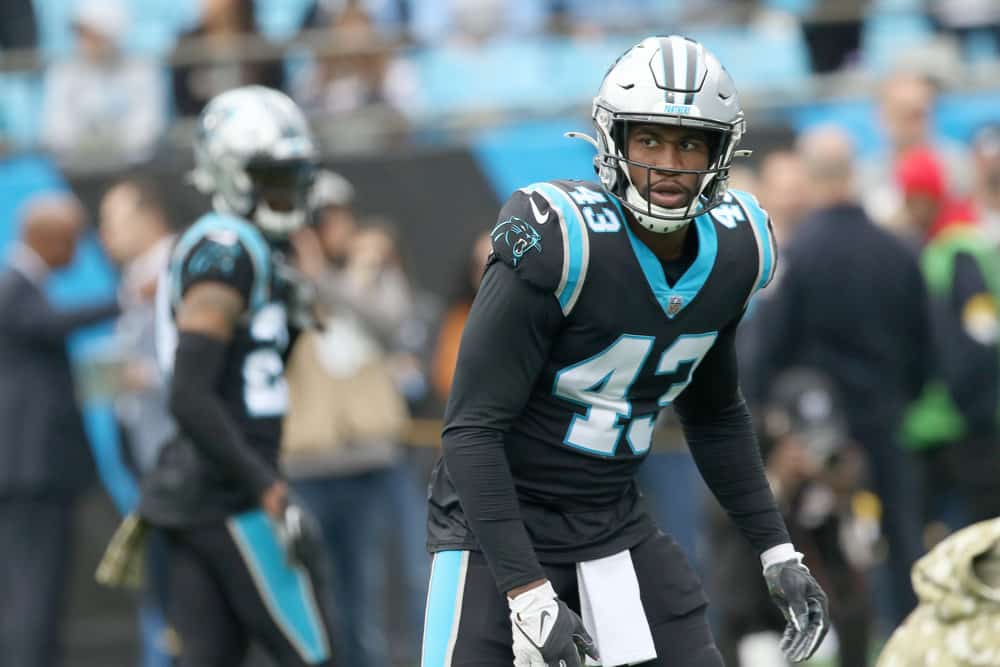 The linebacker position is a very important position on defense.  Inside linebackers often read the offense and call audibles.  Outside linebackers often rush the quarterback, trying to sack them before they can throw the ball.  Linebackers are called on to stuff the run and to drop into coverage.  This year there are a good number of free agents to hit the market.  Here’s a look at ten of the top 2022 NFL free agent linebackers. If you’re looking for some more NFL action, check out how to bet on the Super Bowl.

Playing on a one-year deal for the Green Bay Packers, De’Vondre Campbell had the best season of his six-year career.  A career-high 146 tackles, 2 sacks, and 2 interceptions led Campbell to being named to the All-Pro team.  He has fit in the Packer’s scheme well and it would be surprising if they let him go after his All-Pro year.  However, he has earned the right to compete in the free-agent market.

Campbell spent his first four seasons in Atlanta, followed by one-year stints in Arizona and Green Bay. He’s played in all but six games in his six-year career. This might be his last chance to get a longer-term contract as he enters 2022 as an NFL free agent linebacker.

Just a few months ago, the #Packers picked up De'Vondre Campbell off the street…

Playing his entire career for the New England Patriots, it is yet to be seen if Dont’a Hightower will be kept or take his talents elsewhere.  After sitting out 2020, Hightower maintained his normal production in tackles with 64, however, he was only able to get 1.5 sacks on the year.

A seasoned veteran, Hightower brings excellent game experience, not to mention post-season experience.  While he wasn’t able to get to the 5.5 sacks he had in 2019, Hightower still brings leadership and experience to help lead any defense on the field.  We may see him play for a different team for the first time as a 2022 NFL free agent linebacker.

Leading the NFL in combined tackles with 192, Foyesade Oluokon is set to hit the free agency for the first time of his career.  Drafted by the Atlanta Falcons in the sixth round, Oluokon has improved every year.  This year he had a career-high 192 combined tackles including 102 solo tackles.  He also had 2 sacks, 1 forced fumble, and 3 interceptions.  Adding to his impressive stat line, Oluokon also had 7.5 stuffs in the run game.

Oluokon plays inside linebacker and could excel in any defense.  A success story out of Yale, he should have plenty of interest in the free agency.  At only 26 years old Oluokun is still young enough to become the main part of any team’s defense.  He makes a lot of tackles, always finding his way to the ball quickly.  Oluokon is one of the top 2022 NFL free agent linebackers.

Only playing six games this year, Alexander Johnson will hit the free agency for the first time.  Playing his first 3 seasons in Denver, Johnson did well in 2020 with 124 tackles, 1 sack, and 2 forced fumbles.  In 2021, Johnson had 32 tackles and 2 sacks before injuring his pectoral muscle and ending up on the injured reserve.

Even though he’s 30 years old, Johnson has only played in the NFL for three years.  This is similar to an old car with low miles, his body is fresh, but his mind is mature.  While he may end up on a defense playing situational defense or more of a role player rather than a leader of the defense, Johnson still provides plenty of value.  He enters the 2022 season as an NFL free agent linebacker.

After an incredible final season at Boise State, Leighton Vander Esch was drafted by the Dallas Cowboys.  He exploded his rookie year in 2018 with 140 tackles and 2 interceptions.  Missing almost half the season in both 2019 and 2020, Vander Esch’s 2021 season was disappointing.  He only had 77 tackles, 1 sack, and 1 interception.  He’ll look to turn it around in 2022 as he is an intriguing name in the NFL free agent linebacker group.

Despite a less than stellar 2021, Vander Esch has a lot of talent and a lot of speed.  He’s a first-rounder and even though he didn’t play like it in 2021, if he can get some of his 2018 form back, he can make a huge impact on the defense.  He’s fast to get to the ball and make tackles and is one of the better cover inside linebackers.  Vander Esch should get a decent contract based on his young age and ability to make an impact on the field like he did in 2018, rather than he did in 2021.

Spending his whole career with the Minnesota Vikings, Anthony Barr may play his first game for a different team in 2022.  At 29 years old, Barr is still a very well-respected name in the NFL.  Drafted in 2014, Barr has 495 total tackles, 17.5 sacks, 8 forced fumbles, and 5 interceptions.  This year he finished with 72 tackles, 2.5 sacks, and 3 interceptions.

While his stats have never really jumped off the charts, Barr’s leadership and ability to read the offense are still worthwhile.  While he hasn’t been the run-stuffing linebacker he’s known for since 2018, he will still get a shot to continue playing somewhere.  He still had a good 2021, with his PFF grade ranking 16th among full-time linebackers.  There is a possibility Barr retires if the Vikings don’t bring him back for another season or two.  He starts 2022 as an NFL free agent linebacker.

Only playing two games in 2021, Josey Jewell might play for his second team in 2022. Drafted by the Broncos in the 4th round, Jewell became an immediate starter in 2018.  He had his best season in 2020 with 112 tackles, 2 sacks, and 4 stuffs.  Jewell would still be a great addition as a 2022 NFL free agent linebacker.

While Jewell isn’t a flashy player, he is consistent, especially in stopping the run.  Jewell was a four-year starter for the Iowa Hawkeyes, finishing with 433 career tackles in college, and 6 interceptions, Jewell has great experience for a player who’s still only 27.  He’s a solid inside linebacker but I expect him to land a 1-year prove-it deal after tearing his pectoral muscle this year.

Having the best season of his career in 2021, Kyzir White did a lot for his off-season free-agent position.  Finishing the season with 144 tackles, 1 sack, 2 forced fumbles, and 2 interceptions, White played fast football all season.  His first season starting every game didn’t disappoint, and it wouldn’t be a surprise if the Chargers decide to keep him.

At only 25 years old, if the Chargers decide to let him test the free agency, White should have plenty of suitors.  He’s a solid player who can be put on the inside of any defensive linebacking corps and help lead.  White played safety in college before converting to linebacker.  He has great speed and can cover tight ends as well as play the run.  He’s a valuable 2022 NFL free agent linebacker.

Perhaps nobody has done more for their free agency stock the past couple of years than Haason Reddick.  Reddick played as an edge rusher from the outside linebacking spot for the Panthers and finished with 11 sacks.  Last year playing for the Cardinals, Reddick had 12.5 sacks.  Back-to-back double-digit sack years is something teams will want to bid after in the free agency.  Expect him to get a good payday as a 2022 NFL free agent linebacker.

Finishing the year with 68 tackles, 11 sacks, 2 forced fumbles, and 8.5 run stuffs, Reddick is a fast player who can find his way to the quarterback.  Drafted by the Cardinals in 2017, Reddick played his career there up until last year when he signed a 1-year deal with the Panthers.  I expect he played well enough for the Panthers to sign him to a longer-term contract, however, he should have plenty of other teams interested in bringing him into their defense.

Traded this year from the Denver Broncos, Von Miller adjusted to playing in the cold Denver weather to the warm Los Angeles weather.  The Rams traded away a second and third-round pick for Miller even though he had an injured ankle at the time.  Miller ended up playing in 8 games and finished with 31 tackles, 5 sacks, and 1 forced fumble.

While Miller is 32 years old and battled injury this year, he still provides a lot of leadership and experience.  In ten seasons of playing, Miller has double-digit sacks in seven of them.  Even though he is older and not playing at as high of a caliber, he can still get to the quarterback as proved this year with 5 sacks in limited playing time.  It would be weird for the Rams to trade away a 2nd and 3rd round draft pick for 8 games, but I still expect Miller will have some interested teams in the free agency if the Rams don’t sign him to a one-year deal.  Miller is a great veteran in the 2022 NFL free agency linebacker group.