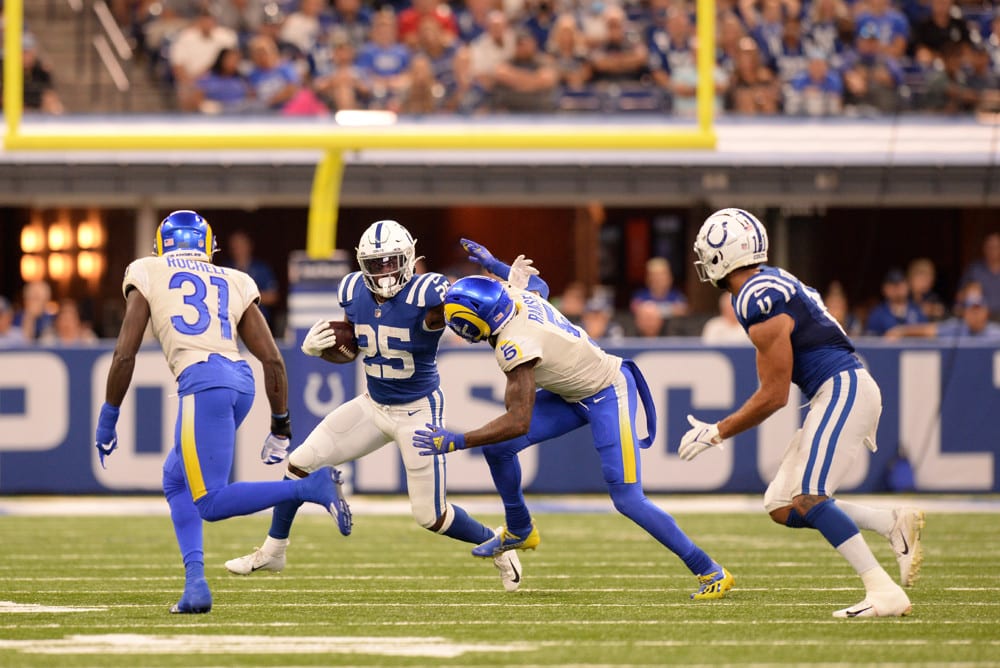 The season is soon approaching its end, and some players may be looking for a new team and a big payday in many cases. Running backs can make an immediate impact from day one depending on the situation. With the increase in the NFL’s salary cap for 2022, here are some players who will benefit this upcoming offseason. The 2022 NFL Free Agent Class has depth at several key positions and that includes several talented running backs.

Marlon Mack is back healthy after sustaining a season-ending torn Achilles in Week 1 of the 2020 season. Here’s the problem, the Colts drafted Jonathan Taylor in 2020, and he is by far the RB1 in the league right now and should finish as a finalist in this year’s Most Valuable Player award. With Mack coming into this season as the 3rd string running back behind JT and Nyheim Hines, his days in Indianapolis are done after this year. The season before his injury, he was able to rush for a career-high 1,091 yards and added 8 TDs. At 25 years old, Mack is young enough and talented enough to get on with a team on a multi-year deal and become a starter again. Mack has had some of the best success among all the free agent running backs heading into the 2022 offseason.

Frank Reich on Marlon Mack: “I’ve talked to him one on one. It’s painful to make him inactive. Painful. But you have to do what’s best for the team… he’s not happy about it, but he’s not gonna be a distraction… it’s a weird situation. He’s behind the hottest back in the NFL.”

Heading into his eighth season next year in the NFL, Melvin Gordon may be signing his last big contract as an NFL running back. The Denver Broncos drafted Javonte Williams in the 2nd round of the 2021 NFL draft, and he has not disappointed at all. As the season has progressed, it has become apparent Williams will be the starter entering the 2022 season. Gordon still has a lot left in the tank and he should be in high demand during the off-season. Gordon has played in 12 games this season and has rushed for 716 yards and added nine touchdowns rushing and receiving. He is a threat running the ball and as a receiver out the backfield. He will be one of the highly sought-out running backs as soon as the season ends.

This has been David Johnson’s worst year since he entered the league in 2015. Having only started 3 games so far this season rushing for 176 yards and no touchdowns, Johnson is looking for a new home in an attempt to revive his career. Much wasn’t expected from the Texans coming into the season after the issues. The Texans are in rebuild mode with everything that transpired before the start of the season. Can Johnson contribute to a team next year? Yes! Can Johnson be a starter next year? I don’t think so. Teams always need a reliable backup running, so Johnson shouldn’t be on the market for too long.

The fourth overall pick in the 2017 draft by the Jacksonville Jaguars, Leonard Fournette looks to cash in on another big payday this offseason. He has had two successful seasons with the Buccaneers and added a Super Bowl win to his resume as the lead back for them in 2020. Although things didn’t end well for him in Jacksonville, he has shown he can be the workhorse in the backfield. He has also become a reliable receiver out the backfield the past few years, which is what teams are looking for to add. His best season was in 2019 when he had career highs in rushing (1,152) and receiving (522). At 26 years old, Fournette still has a lot left in the tank, and his phone should be ringing once this season ends. If he does not re-sign in Tampa, Fournette will be one of the hotter free agent running backs on the market in 2022.

After eight years in the league, Cordarelle Patterson is finally on a team that understands how to utilize him as a dynamic offensive player. With three games left, he already has career highs in both rushing (565) and receiving (524) yards. He signed a one-year, $3,000,000 contract entering this season with the Atlanta Falcons. There are a lot of teams that can benefit from Patterson’s talents, not only on the outside but in the backfield as well. Mike Davis has lost snaps and carries to Patterson throughout this year. After his performance this season, Patterson should demand a lucrative multi-year contract with a contender to end his career on a high note.

After being traded by the Patriots, Sony Michel landed in Los Angeles for a fifth-round pick to start the 2021 NFL season. The Rams were in desperate need of another running back after the season-ending injury to starter Cam Akers. Playing behind Darrel Henderson, Michel has still been able to play in every game this season. He was able to make an impact in Weeks 13 and 14 as the starter with Henderson sidelined due to an injury rushing more than 20 times in each game. With Akers on track to come back for the start of the 2022 season, Michel will have to find a new team. Atlanta and Houston could be potential landing spots.

Sony Michel has helped the Rams find their identity on offense again following a rough stretch of games earlier this season. https://t.co/YPFUJnaSyc

I don’t think anyone saw this season playing out the way it has for James Conner, or at least I didn’t. In just 14 games, he already has had the best season in his five-year NFL career. Even with Chase Edmonds in the mix, Connor has gotten the majority of the snaps in the red zone. He already surpassed his best season for rushing TDs at 12 with 14 this season and three games left on the schedule. Connor has been able to carry this team to a few victories this year. I can see a scenario where Arizona will make every effort to keep him long-term. Conner could be a great value as a free agent and one of the top running backs in 2022.

If you didn't know the phrase #ConnerStrong…

It looks like Darrel Williams is on a mission to prove he is a starter in this league. He’s been the starting running back in five games this season with the absence of Clyde Edwards-Hillaire in this Chiefs high-powered offense. Nowadays, you have to be able to catch passes out of the backfield if you want to get on the field. With CEH being drafted in the first round in 2020, this is clearly his team moving forward. The Chiefs may want to keep Williams, but I expect him to see what other offers may be out there heading into 2022.

Jeff Wilson has produced in a crowded backfield out in the bay when called upon. You never know what you will get in a Kyle Shanahan-led offense as a running back. Due to some injuries this season, Wilson has had to step up for his team, and he has met the challenge. Wilson has been a good fill-in for the injured Elijah Mitchell since he started half the games he has played in. His best season was in 2020 where he played in 12 games rushing for 600 yards and caught 13 passes for another 133 yards. Teams are always looking for a capable backup so Wilson will find himself with plenty of options this offseason. His injury history will temper the market, but teams are always looking for running backs like Wilson to come in as a free agent in 2022.

If a team is looking for a pass-catching back, they have to look no further than J.D. McKissic. In five out of six seasons he’s been in the league, McKissic has had more receiving yards than rushing yards. In a shared backfield in Washington with teammate Antonio Gibson, McKissic has been relied upon once his number has been called. I don’t think McKissic can land on a team as a starter but in a shared backfield? Absolutely! Each and every week, we see teams unable to convert on critical downs because their running backs aren’t good or as good in passing situations. McKissic has proven he’s worthy of a multi-year contract heading into next season.