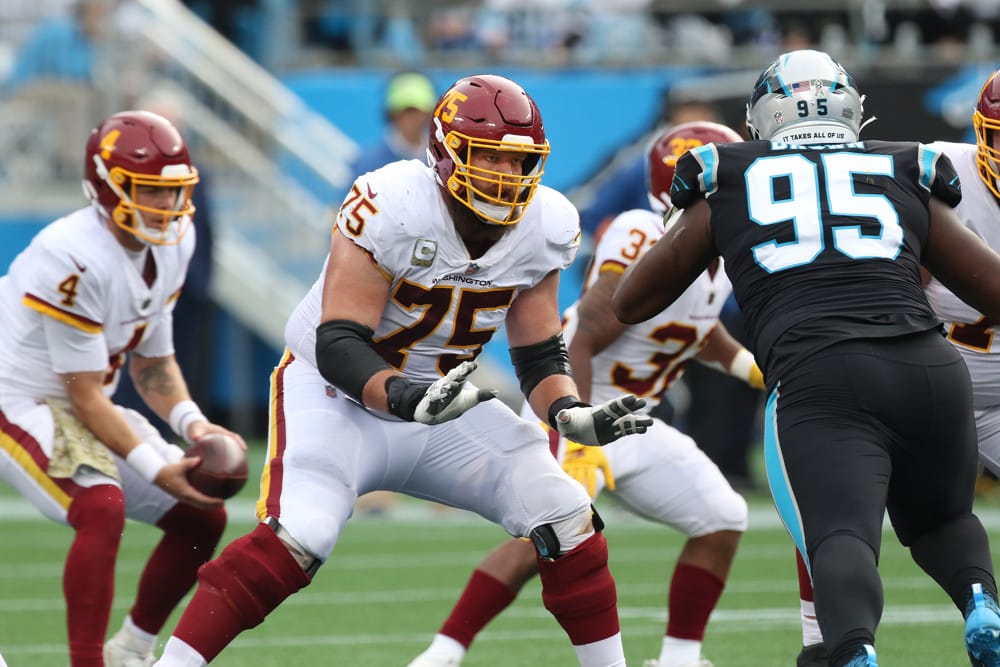 While the offensive line may not be the flashiest of positions when it comes to free agency, it can really improve a team’s run and pass game. Big guys up front are either paving the way for the running back or buying the quarterback more time to throw touchdowns. While linemen have skills that help them excel in certain offensive schemes, most of them can really be plugged in on any offense, making it harder to predict where they will end up. However, these guys have had success on their current teams and look to build on that success as they hit the free agency. Here’s a look at some of the top 2022 free agent offensive linemen.

Considered one of the best guards in the NFL since being drafted in 2015, Brandon Scherff will potentially be moving to only the second team of his career. Scherff currently plays right guard but played left tackle in college and can easily play either position. Scherff was ranked 98th on the NFL’s top 100 players this season, his first time on the list. When drafted, Washington already had Trent Williams at the tackle position. Scherff was put into the guard position and excelled so well that they kept him there. He has the talent, technique, and football IQ to play any position on the line. He’s a strong addition to the class of 2022 free agent offensive lineman.

Playing on his 2nd franchise tag in a row, Scherff can immediately help any team’s running game and passing game. He has helped the Washington Football team’s offensive line rank in the top 10 the past couple of years. The biggest concern with Scherff is his injury history as he has yet to play a full season since his first two years. However, he’s a tough player and provides great value and leadership. With an overall pro football focus grade of 71.4, even with the injury history, Scherff is bound to find work and have a good market especially given that he’s allowed 0 sacks.

Brandon Scherff looks for work with the best of them pic.twitter.com/SA7sdFf3s7

Finding himself 79th on the NFL’s top 100 list, Terron Armstead will become a free agent after his ninth year of football. Armstead can play both tackle positions but exceeds at left tackle, a crucial position for all quarterbacks. The Saints have already expressed that they will let him test the free agency in 2022. Armstead currently has an 85.6 pass-blocking grade, making him one of the better tackles.

With an overall PFF grade of 76.6, Armstead has yet to play a full season, however, he hasn’t missed a lot of time. At 30 years old, Armstead has played his whole career for the Saints. One team already rumored to have interest in Armstead is the Colts, where he could step in to a team with a strong rushing attack, while also protecting Wentz in the passing game. Regardless of his landing spot, Armstead will have a competitive market advantage as a 2022 free agent offensive lineman.

Terron Armstead has thrown 2020 out of the club pic.twitter.com/KqAMparNfn

One of the more seasoned players in the 2022 free agent offensive lineman class is Duane Brown. At 36 years old, Brown has had multiple grades above 80 throughout his career. He has struggled at times this year, allowing 8 sacks and is currently being graded at 73.3. After holding out with the Texans and ending up on the Seahawks, Brown is an intriguing 2022 free agent offensive lineman at a discounted price.

In the past, Brown has been an excellent pass protector and its possible age has caught up with him. Still, with 14 years of experience starting with the Texans, Brown has rarely missed time. He’s spent the last five seasons with the Seahawks and appears to be headed to his third team. The Bears, who need offensive line depth, just showed they weren’t afraid to sign a veteran when they signed Jason Peterson. Several teams like them could take a chance to add the depth in the veteran who is looking to bounce back to his better playing days.

While centers don’t always get the attention as other offensive linemen, Ryan Jensen will be the best one on the market among the 2022 free agent offensive linemen. Considered a mean and tough Center, Jensen has started every game since 2017, landing with the Bucs in 2018, after limited action his first four seasons with the Ravens.

With a pass-blocking grade of only 62.3, Jensen’s run-blocking grade is 77.6. As he hits the market, look for him to end on a team that focuses on the run game such as the Bears or the Giants. Jensen has become a consistent centerpiece to the offensive line. Wherever he ends up he will add toughness to the team as a 2022 free agent offensive lineman.

In April, the Chiefs traded their 2021 first-round pick, a third and fourth round pick, and a 2022 fifth round pick for Orlando Brown. Given that they gave up so much capital they aren’t likely to let him walk out during the free agency, however, they will most likely have to pay a big price to keep him. Brown is one of the more consistent tackles, not missing a game since week 7 of 2018.

With an overall rating of 74.6, Brown possesses both pass and run blocking strengths. At only 25 years old, drafted in the third round of 2018, Brown is one of the younger options in the 2022 free agent offensive lineman class. He’s played the second-most offensive snaps this year at 912 and has both the experience and youth to be highly sought after. Look for Brown to be a big free agent winner, whether he stays with the Chiefs or takes his talent elsewhere.

Orlando Brown was doing terrible things to people on Sunday. I wrote about it here. You should read it. And smile. https://t.co/AtYxzLH3yy pic.twitter.com/PSLxxCbPKZ

One of the better pass-blocking guards in the 2022 free agent offensive lineman class, Laken Tomlinson will assist any quarterback he plays with. Tomlinson has allowed quarterback pressures on just 2.5% of pass-rush snaps, ranking him the sixth-best among guards.

After being drafted by the Lions in 2015, Tomlinson was traded to the 49ers in 2017 and then signed to a contract extension in 2018. Tomlinson is not only consistent in his blocking, but in his health, not having missed a game since 2017. He’ll get plenty of interest as a 2022 free agent offensive lineman and will improve both quarterback and running back opportunities.

Lol. Laken Tomlinson is not impressed by your nonsense. pic.twitter.com/vb9syFgImO

Not at the top of his position, but an extremely consistent option, Morgan Moses hits the 2022 free agent offensive lineman class. Moses hasn’t missed a game since 2015, making him one of the most durable linemen available.

Drafted in 2014 by the Washington Football Team, Moses signed a one-year deal last year with the New York Jets. His grading doesn’t jump off the charts at an overall of 70, but it is his experience and durability that make him valuable. A better run blocker than a pass blocker, look for a run-heavy team to add Moses into their mix to battle in the trenches. Moses has long 35.5” arms that he uses to hold defenders off and push them away from the ball.

For all the crap we give Morgan Moses, he was pretty great Sunday. pic.twitter.com/BkHJAMck2N

Coming back from an Achilles injury, Eric Fisher worked his back on to the field quicker than expected. Still getting back to 100%, Fisher is looking to bounce back to his Kansas City days where he was considered one of the top offensive tackles in the game.

Fisher is a two-time pro-bowler with eight years of experience. He was a first-round draft pick to Kansas City and played like a first-rounder throughout much of his career. While the Achilles injury derailed him a bit, Fisher can still use his 6’7” frame to push defenders around. I expect the Colts to make a run at re-signing him, however other teams looking to the 2022 free agent offensive lineman for an offensive tackle could step in. The Panthers and Ravens would both be good fits for Fisher as well.

Spending much of his career in Chicago, Charles Leno was a cap casualty prior to the 2021 season. Perhaps nothing benefited him more, as the Washington Football Team signed Leno and he’s played better than his Chicago days. While penalties seemed to make Bears fans groan when thinking of Leno, he has only had one this year. Leno is perhaps one of the most improved players in the 2022 free agent offensive lineman class.

Leno struggles in the run blocking game but has excelled at pass blocking this year, with a grade of 85.2. Inconsistency and low cap room caused him to get cut from Chicago and he’s looked better than ever since signing a one-year deal with the Football Team. A seventh-round draft pick in 2014, Leno took over as a starter for the Bears in 2015 and hasn’t missed a game since. His improved play this year will most likely get him a slightly bigger contract than his 1 year, $5 million dollar deal from this year.

Charles Leno Jr. takes a lot of guff on Twitter. But as this snippet from @MattBowen41 @NFLMatchup shows, Leno can be quite effective on the move and in the running game. #RunTheDangBall pic.twitter.com/bZt4axQJg5

One of the youngest players in the 2022 free agent offensive lineman class, Connor Williams has spent the first four years of his career with the Dallas Cowboys. The Cowboys have had one of the top-ranked lines in previous years and Williams has been one of the contributors to their success. At only 24 years old Williams has a perfect mix of youth and experience to make a splash in the free agency. He was benched earlier this year, but I think Williams bounces back.

With an overall grade of 71.8, Williams could still improve in both run and pass blocking. Williams also needs to improve on penalties as he’s tied for second-most among guards. However, it isn’t all bad, as Williams has only allowed one sack on the year. While younger offensive linemen that play well normally get a contract extension, Williams will be sought after during this year’s free agency period and will have plenty of suitors. Staying in the NFC, I see the Cardinals, Washington, and Giants as good fits.  Also since he’s not very active on social media, try not to get him mixed up with this legend, also named Connor Williams.