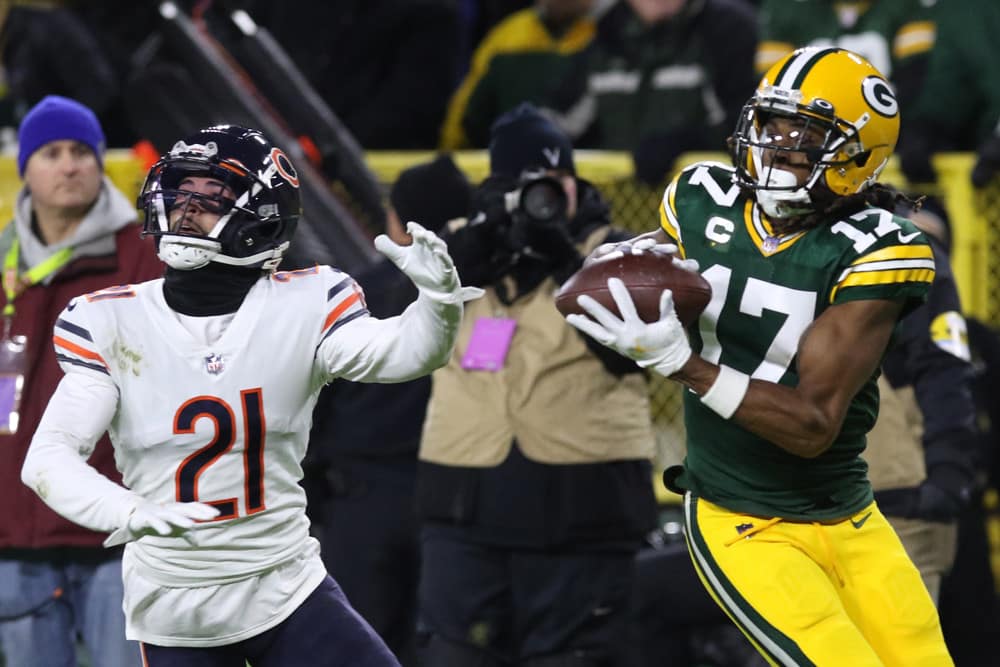 Known as “primadonnas,” the “divas” of the league, and whatever other word you want to refer to them as. Let’s not forget this is one of the most important positions in the game today, with all the rule changes made to accommodate the offense, here are some of the top wide receivers hitting free agency this offseason.

This upcoming offseason, the Green Bay Packers will have some tough decisions to make. With Aaron Rodgers all but ready and looking forward to leaving the Packers, can they afford to let Davante Adams walk as well? Nope, not a chance! They need and will do everything in their power to sign Adams to a long-term deal. In his second consecutive season with over 1,000 receiving yards, Adams continues to be the most reliable wide receiver on the team and Rodgers’ favorite target. With no signs of slowing down anytime soon, teams should be putting presentations together to lure Adams out of Green Bay.

Coming into this season, everyone, and I mean everyone, thought Allen Robinson was going to be a top ten receiver this year, and rightfully so. He finished with over 1,000 receiving yards in his last two seasons and should’ve been on track for his third, but due to the lack of “good” quarterback play, he was an afterthought in the offense. This is the worse year of Robinson’s eight-year career statistically. He has recorded 32 receptions for 353 yards and one touchdown. It’s safe to say his time in Chicago is all but done, and I don’t blame him for wanting to leave after they couldn’t come to terms with an extension before the season started. #FreeHim

Mike Williams has taken advantage of his opportunity to show the league he is indeed a WR1! Already setting a career-high in receptions (64) and receiving yards (964) this season, a huge payday is all but guaranteed after this year. Having Justin Herbert as your quarterback also doesn’t hurt as he is quickly becoming one of the best at the position in the league. I can see Williams agreeing to stay in Los Angeles as he and Keenan Allen are one of the best receiving corps in the game. But if he does leave, best believe it will be for a record-setting contract for WRs.

Do not judge Odell Beckham Jr. for his time in Cleveland. After all, the New York Football Giants traded him away to a team that was NOT his choice, and he still produced…well, in his first year there, at least. OBJ has had five seasons with over 1,000 receiving yards in his eight-year career. He was unable to reach the endzone in the six games he played with the Cleveland Browns but has managed to record three touchdowns with the Rams in five games he has played. Unfortunately, a negative narrative has been written on OBJ, but one thing people can’t deny is his ability to produce on the field when healthy. Los Angeles allows him to pursue his off-field interests (yes, it is important) as well as contend for a Super Bowl trophy.

I was really down, I had to self revive….. pic.twitter.com/7sYhy7pbSw

Entering the 2021 NFL season as a Super Bowl champion, Chris Godwin proved he is one of the best receivers in the league. Playing in all 14 games and amassing 98 receptions for 1,103 yards, Godwin was on pace to have his best year statistically before his season-ending ACL injury in Week 15. His stock has increased, and I wouldn’t be surprised if he is one of the first wide receivers off the market after this season. At 25 years old, Godwin has many productive years left in him. It’ll be interesting to see where he lands for the next couple of years.

Before leaving with a knee injury, Godwin came close to eclipsing the Bucs' single-season receptions record. Fournette, Gronkowski and David all added to impressive totals as well.#GoBucs

When I think of Will Fuller the first thing that comes to mind, unfortunately, is “injury prone.” The most games Fuller has played in have been 14, which was in his rookie season back in 2016. During the scouting combine, he ran a 4.32 in the 40, which was the best time among wide receivers. He was always capable of a big play or two as a deep threat when he was on the Texans with Deshaun Watson. He hasn’t been able to finish a season with over 1,000 receiving yards, but he also hasn’t been able to play a full season. Things have not panned out in Miami, but at 27 years old, he is young enough to resurrect his career, barring any significant injuries. One of the interesting, if not, most interesting wide receivers entering free agency.

“Corvette, Corvette…” Ok, I’m done, but what a turn of events out in Pittsburgh in just a few years for JuJu Smith-Schuster. After Antonio Brown forced his way out of town, it seemed like JuJu would take that number one role and run with it…not so much! You could make an argument that he preferred to take his talents to TikTok with all the uploads but fell back on that as well. He had two productive seasons for the Steelers, and the rest have been pedestrian at best. He signed a one-year, $8 million contract to remain on the team but suffered a season-ending injury in Week 5. Smith-Schuster has proven he can be a great second option at wide receiver for a team, but not the primary one. Still, options will and should be there for him after the season. JuJu has the talent that could make him a value for teams looking to add a shifty talent out of the 2022 free agent wide receivers pool.

In a crowded wide receiver room, Michael Gallup has produced when on the field. Even as the third option for the Cowboys, Michael Gallup has made big plays. In an offense that seems like pass-first as of late, he has been a recipient of many targets in his short time in Dallas. Selected as the 81st overall pick in the 3rd round of the 2018 draft, Gallup is all but certain to get PAID this offseason as he has outplayed his rookie contract. With Dak Prescott at the helm, staying in Dallas may not be out of the question, but expect other teams to make a push to sign Gallup as well.

I’m not the one to say I told you so, but I told you so! While people were writing off A.J. Green, I knew he just needed to be anywhere else other than on the Bengals’ roster to flourish again, and he did. In his first year in Arizona, Green has been able to do what he did when he first entered the league in 2011, making big catches in critical moments. Now granted, Green has been in the league for ten years and is 33 years old and will be 34 when the 2022 season starts, but I feel like he has at least two good years of production left. Who will need Green’s services? Any team looking for a reliable receiver that can make a catch in crucial moments. Green could be a veteran steal among the 2022 free agent wide receivers for a “win-now” team.

As of late, when talking about Antonio Brown, you have to know that a suspension or two may occur during or before the season starts. But it doesn’t matter because he’s still uber-productive and reliable in an offense. Hey, I’m just being honest. I’m going to cut right to the chase. A lot of teams are off of AB for his on and off-the-field antics, BUT if Tom Brady wants him back in Tampa then guess where he will be next year? In Tampa! With Chris Godwin out for the rest of the season and Mike Evans due to missing a few games, it will be targets galore for the rest of 2021. Brown has fumbled the bag in the last few years, so the market won’t be as it should be for him entering 2022.

The Buccaneers are 5-0 this year when Antonio Brown is on the field. pic.twitter.com/ZKLMQb19vQ