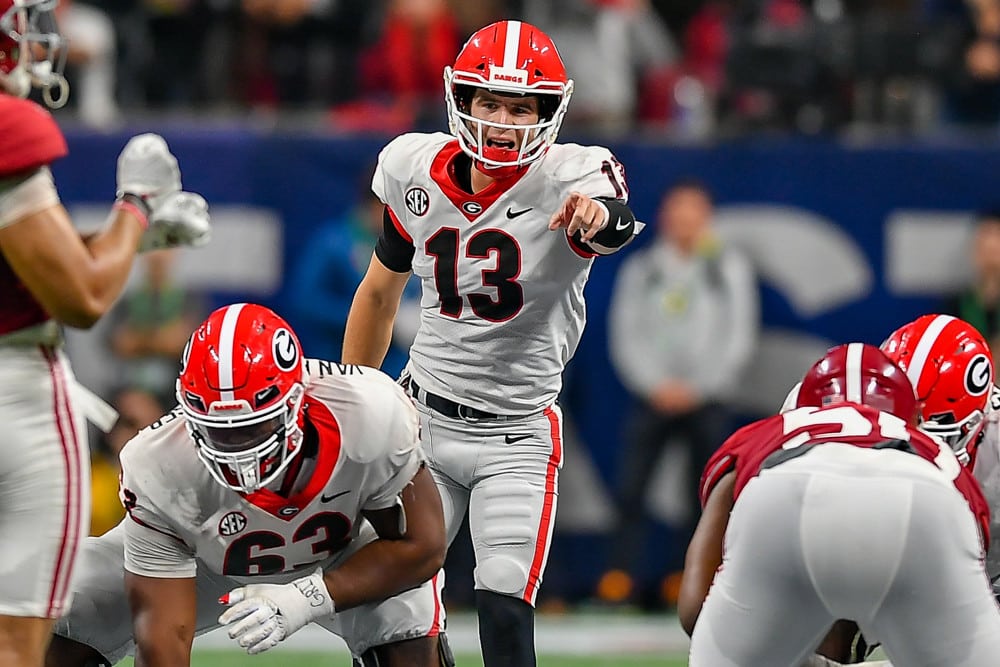 It’s rematch time. The 2021 College Football season has come down to its final game: Georgia vs Alabama for all the marbles. Arguably the two best teams all year get a final crack at hoisting the National Championship trophy. Not only is it a rematch of the SEC Championship from just over a month ago, but it’s also a rematch of the 2017 National Championship game where the Crimson Tide won 26-23 in overtime. Plus, Alabama is looking to repeat and win its third national title in five years.

Alabama rolled into Indianapolis fairly easily — knocking off Cincinnati 27-6. The offensive and defensive lines were dominant, the ground game was unstoppable, and the defense was suffocating. Heisman Trophy winner Bryce Young tossed 3 TDs, Brian Robinson Jr ran for over 200 yards, and the Tide defense limited the Bearcats to just two field goals on the day.

It was the kind of performance you’d expect from the No. 1 seed and with Georgia’s dominant performance in the nightcap, the stage has been set for an all-SEC final. The Bulldogs looked just as impressive as Bama — crushing Michigan, 34-11. The Dawg defense dominated the overmatched Wolverines and QB Stetson Bennett played lights out, throwing for over 300 yards and 3 TDs.

So now it’s rematch time. In the first matchup, Alabama once again showed its superiority in Atlanta, beating Georgia 41-24. Bryce Young balled out and basically won the Heisman that night, throwing for over 400 yards and 3 TDs against the highly-respected UGA defense. The wide receiver combo of Jameson Williams and John Metchie III combined to haul in 13 catches for 281 yards and 3 TDs. Bama also won the turnover battle 2-0 which included a pick-six thrown by Stetson Bennett.

Moving onto the upcoming matchup, let’s break down both sides of the ball before predicting a winner.

Over the course of the season, Alabama put up some insane offensive statistics. The Tide used to rely on a run-heavy approach but almost exclusively favored the passing game in 2021. Bryce Young threw for over 4,500 yards with 46 TDs to just 5 INTs while completing 67.6% of his passes. With that stat line it’s no wonder he won some hardware this season.

The WR duo of Williams and Metchie was one of the most prolific in the country but Metchie went down with an injury in the 2nd half of the SEC Final and is out for the season. This is a major blow to the Alabama passing game. Focusing on the ground game vs Cincy, Bama managed to only throw for 181 yards with Jameson Williams only catching 7 balls for 62 yards. Metchie’s main replacement, Ja’Corey Brooks, was able to reel in 4 passes for 66 yards including a 44 yard TD but was quiet other than the big play. Look for slot WR Slade Bolden and perhaps TEs Cameron Latu and Jahleel Billingsley to potentially get more targets Monday night.

Going into the Semifinal, Bama’s run game had been mediocre. The offensive line has not lived up to Alabama’s standards which resulted in the 80th best rushing attack in the country. The Tide only averaged four yards per rush and gave up 37 sacks. With that said, against the Bearcats, Bama reminded all of us that an SEC offensive line is usually superior to an AAC defensive front. The Tide ran for over 300 yards with Brian Robinson eclipsing over 200 himself. It was an impressive rushing performance, but I’m not sure it’s replicable vs Georgia’s strong run D.

On the other side of the field, UGA’s offense has been solid but not spectacular. JT Daniels started under center but injuries forced the much-maligned Stetson Bennett to get the majority of the snaps this year. He’s improved as the season went on, eventually solidified himself as the starter, and just had the most impressive game of his collegiate career. Michigan may have rolled into Miami with the 12th best defense in the nation but Bennet lit them up like a Christmas tree. Completing 67% of his passes for 313 yards and 3 TDs while also rushing for an additional 32 yards. It was an inspiring performance and in order to take down Alabama, he’ll need to play with the same verve.

Stetson Bennett with a BEAUTY for the 57-yard TD 🔥#CFBPlayoff pic.twitter.com/Guzy9W0G6A

The ‘Dawgs have one of the best TEs in the country in Brock Bowers but the wide receiver unit is less than stellar. There are a couple of upperclassmen in George Pickens (who missed most of the season with a knee injury but has returned) and Kearis Jackson but the more talented players are the freshman and sophomores. Ladd McConkey has been the most consistent, Jermaine Burton caught a 57 yard TD vs Michigan, and Adonai Mitchell has shown flashes of talent.

Behind Bowers, RB James Cook might be the next best pass catcher. I highlighted Cook as a difference-maker leading up to the semifinal, and he came through – catching 4 balls for 112 yards and a TD. With Bowers and Cook, Georgia has the luxury of not needing a top-end WR unit to have an effective day through the air.

The other two UGA RBs who will get touches are Zamir White and Kenny McIntosh. Together, the trio has next-level talent and is fortunate to run behind one of the best offensive lines in the country. The Bulldogs ran for 190 yards on Michigan and more importantly, limited one of the best pass-rushing teams in the nation to zero sacks. In the first matchup vs Bama, the Tide pressured Bennett constantly and registered 3 sacks in the process. The UGA OL needs to play better in the rematch and keep Bennett upright to have a chance.

With both teams having top-10 defenses, it was surprising to witness almost 1,000 total yards and 65 points in the first matchup. On the bigger stage and now with more familiarity, I expect the total score of this game to be closer to the Vegas line of 52.

Before the SEC Championship, Georgia had one of the most impressive defenses we’ve seen in recent years. However, they had a relatively light schedule and had not been challenged by an elite QB until Bryce Young sliced up their secondary. They bounced back vs Michigan, holding the Wolverines to 237 passing yards with just a 50% completion percentage, and forced two INTs. The secondary, specifically CBs Derion Kendrick and Kelee Ringo, need to duplicate this performance and play better than they did in Atlanta.

In order to help the secondary, Georgia will also need to get more pressure on Bryce Young. That might mean more blitz packages with UGA’s two excellent LBs Nolan Smith and Nakobe Dean who both registered sacks vs Michigan. As always, the big 6’6” 340 lbs Jordan Davis anchors the interior of the DL and plugs up the opponent’s rushing attacks.

Although Georgia racked up 450 yards on Alabama in the first matchup, a lot of that was in garbage time. Bama limited the Georgia run game to just 3.6 yards per attempt, intercepted Bennett twice including a pick-six, and totaled three sacks. Although Bama’s defense may not be as highly ranked as Georgia’s on the season, they were the better unit in the SEC Champ game.

It was more of the same in Texas vs Cincinnati in the semifinal. In a dominant performance, the Tide limited the Bearcats to just 218 yards of total offense while sacking Desmond Ridder six times. Bama’s best players balled out including LB Will Anderson Jr who registered two sacks and DL Phidarian Mathis who also had a sack and a couple of TFLs. Also, the secondary led by S Jordan Battle and CBs Josh Jobe and Jalyn Armour-Davis totally blanketed Cincy’s pass catchers.

National Championship: Georgia vs. Alabama Between the Lines

Going back to the first UGA/Bama game, the Tide threw for more yards, ran for more yards, won the turnover battle, and controlled the lines of scrimmage. As for 3rd down conversions, Bama was 7 for 14 while Georgia was just 3 for 12. The only negative about Alabama’s performance, which has been a recurring issue this season, is they were penalized more often and for more yards (7 for 85 vs 6 for 45). In a tight game where the talent level is relatively even, turnovers and penalties could be huge. The special teams for both squads is basically a wash.

Getting the opportunity to bet on Alabama as a dog is rare. Getting a second opportunity in the same season against the same opponent is unheard of. I understand Saban’s record vs Georgia while at Bama is 7-1 (with the one loss in Saban’s first year) and I understand Saban’s record against former assistants is 26-1 (the one loss this year to Jimbo Fisher/Texas A&M) but I’m going out on a limb and picking the Georgia Bulldogs.

Records are made to be broken and even the Cubs and Red Sox eventually won championships (still waiting on the Browns). This game comes down to what Georgia’s defense can do vs Alabama’s passing attack. While both defenses will neutralize each team’s ground game, Georgia will have much more success slowing down Bryce Young this go-around. The loss of John Metchie is huge and the Dawg defense will blanket Jameson Williams.

Of course, I am concerned that I am going against the team with the better coach and the better QB. However, Stetson Bennett has improved and should be brimming with confidence entering this game after his performance vs Michigan. As I stated in last week’s preview, James Cook could be the X factor again. It’s hard to beat a good team twice in one season and it’s extremely difficult to repeat as national champions. Georgia is the more veteran team and they should be hungrier. Go Dawgs.