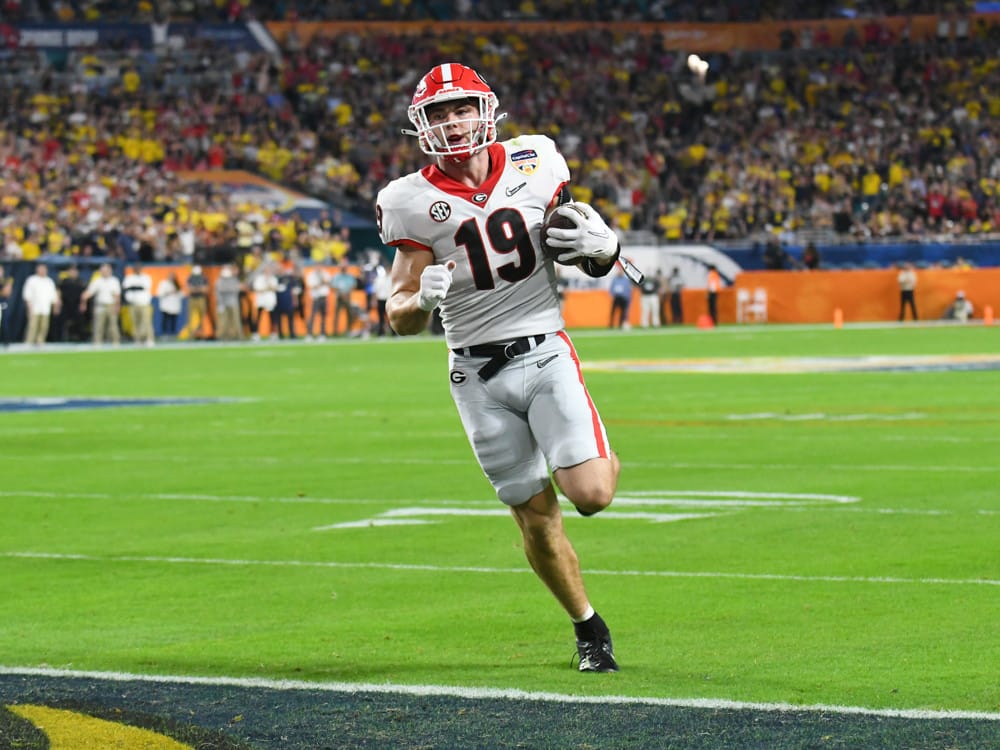 It’s National Championship time which means it’s also the last chance for us to play DraftKings College Football DFS until late August. Take advantage of the opportunity and let’s get in the green.

In case you live under a rock, either Georgia or Alabama will be crowned national champions late Monday night. It’s a rematch of the SEC Championship game that just took place about a month ago.

Here’s the lineup I’ll be playing. Good luck and let’s do this.

Georgia’s freshman TE Brock Bowers has had an excellent first season in Athens. On the year, Bowers has 52 catches for 846 yards and 12 TDs. He’s eclipsed the 100-yard mark four times including against Bama in the first game where the big TE reeled in 10 for 139 yards and a TD. In the semifinal against Michigan, he also crossed the goal line while catching 5 for 55.

Bowers is only the 6th expensive player on the slate. Assigning him as my captain allows me to save some $ compared to others who may be leaning towards one of the QBs, Jameson Williams, or Brian Robinson Jr. as their 1.5X player.

In general, I believe both of these top 5 ranked run defenses in the country will slow down each other’s ground games. Brian Robinson was excellent vs Cincinnati running for over 200 but only put up 9.1 fantasy points in the first matchup vs Georgia. I project him to be heavily owned due to recency bias so you won’t find him in my lineup.

Instead, I’ll go Bryce Young who is almost a must-roster. The passing games for both teams should be effective come Monday night and we already witnessed what the Heisman winner did vs Georgia over a month ago – throwing for over 400 yards and 3 TDs. I expect Young might be the chalk Captain play so I’ll just have him as my most expensive utility player. He’s a lock for a solid game but remember John Metchie III is out with an injury which lowers Young’s ceiling.

Saving some coin at Captain allows me to roster both starting QBs on the slate. From a fantasy perspective, Stetson Bennett put up 27.7 points in the first game even though he didn’t necessarily play great. A lot of garbage time yardage and 3 passing TDs helped offset the two INT’s thrown (one being a pick-six).

He played great in the semifinal vs Michigan so Bennett should be entering this game full of confidence. Again, I expect each team’s passing attack to have success so locking up both QBs makes a ton of sense.

James Cook is the only RB you will find on my roster and that’s primarily because of what he contributes in the passing game. He’s been a threat out of the backfield all season and just caught 4 balls for 112 yards and a TD vs Michigan. He’s a game-changing playmaker and is the most explosive player on UGA’s roster. Maybe you’ve heard of his older bro too.

I’ve been telling anybody that will listen that the loss of WR John Metchie III is a huge blow for Alabama. He and Jameson Williams formed an excellent WR duo that forced opposing teams to be honest in coverage. Without Metchie, the Bulldogs will roll coverage towards Williams. He’s an excellent receiver but his price tag is too rich for my blood.

Instead, I’ll pivot and snatch up Bama’s slot guy Slade Bolden. He had a solid game vs Cincinnati – catching 3 for 31 and a TD and was effective in the first game vs Georgia (5 for 54). You have to get pieces of the Bama passing game so if you can’t afford Williams or Ja’Corey Brooks ($6.4K), Bolden is your guy.

Here’s my punt play of the day. Short on money, Kearis Jackson is strictly a dart throw. Georgia has about four WRs who get significant playing time and Jackson is probably the most inconsistent – hence his price tag. Anything Jackson can contribute is strictly gravy.