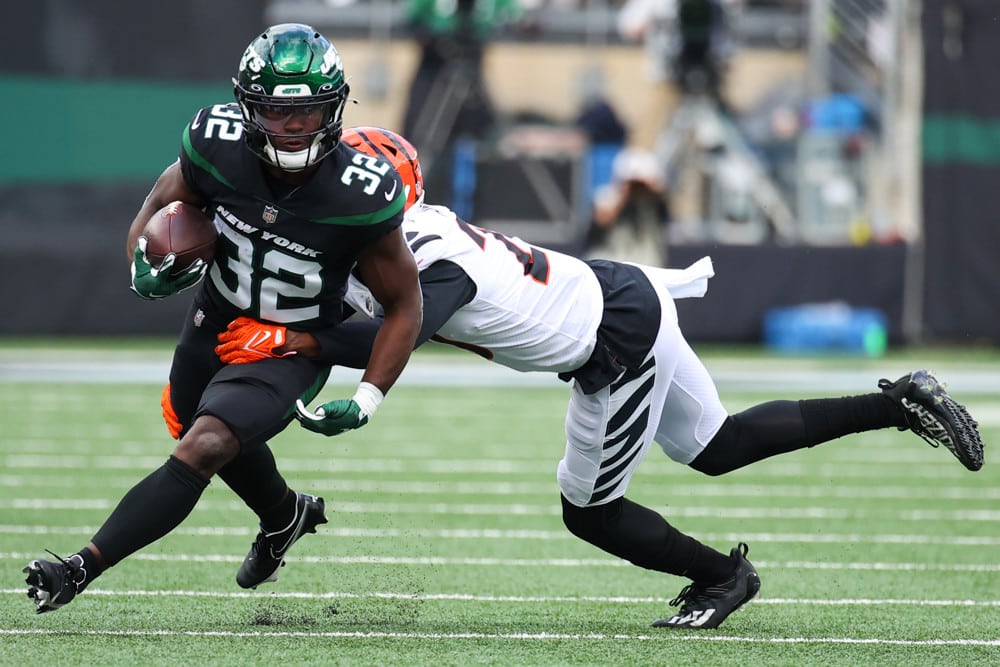 It’s already been a wild first couple of days and this Week 9 NFL Thursday Night Football battle proves to be more of the same. Both of this week’s teams have had their share of highs and lows. At the end of the day though, only a single game in the win column separates the two. Indianapolis had won two straight before losing last week to the Titans. The Jets shocked the world last week by knocking off the Bengals to earn their second win of the season. New York accomplished that task with their backup quarterback to boot.

This slate features heavy pricing at the top spots. Deservedly, Jonathan Taylor commands a king’s ransom at over $17k in the captain’s spot. Underneath him, Carson Wentz and Michael Pittman are both over $10k even at flex pricing. Injuries help the situation a little here with both T.Y. Hilton and Corey Davis are set to miss this game. That unlocks a few less expensive options with a promising return on value.

Last week, Michael Carter enjoyed the best outing of his young career. The rookie carved out 77 yards and a touchdown on 15 carries. He also caught nine of his team high 14 targets for an additional 95 yards. His explosion came in large part to Mike White drawing the start at quarterback for the Jets against the Bengals. All told, White threw for over 400 yards with Cater serving as the major benefactor. White also stepped into the game against the Patriots the week before when Zach Wilson was injured in the second quarter. Up to that point, Carter had not been targeted for a pass. After White entered the game, Carter saw nine targets. He caught eight of those. Since White has taken over at quarterback, he’s looked to Carter more than Wilson had all season.

That trend should continue this week against the Colts. Indianapolis is in the middle of the pack defensively against the pass and the run game. They have done relatively well against opposing running backs on the season overall. Even still, this could be a game in which Mike White will need to continue to turn to his new favorite target. This is exactly what you are hoping for in a PPR format with each catch counting the same as ten rushing yards. Of course, should the Jets find themselves in an early hole, Carter’s targets become all the more valuable as do the completions that come with them. Even if he doesn’t have another 32 fantasy point outing this week, his flex price makes him worth the roster spot.

We are now in the third week since Jamison Crowder has returned to the field of play. He’s seen 15 targets since coming back from injury. All but two of them have come from Mike White. Crowder has been White’s second favorite outlet since taking over for Zach Wilson. It’s starting to look as if the veteran receiver is moving in the direction many fantasy football players were hoping for at the start of the season. What’s more is that overall, the targets for Crowder have always been encouraging. In his four total appearances this season, he’s seen at least six targets in all of them. Most of his lack of production could very well have been a result of the overall ineffectiveness of the Jets offense as a whole this season.

Mike White may not be what turns this team around this season. Although, he’s proven he’s at least capable of keeping it above water. He’ll get the chance to help Crowder remain fantasy relevant this week against the Colts. The Indianapolis defense has allowed five wide receivers to reach or surpass the 100-yard mark this season. They are also second to last in the league at passing touchdowns allowed per game. So far, they have given up a total of 13 receiving touchdowns to the wide receiver position alone. They are fresh off of a game in which A.J. Brown touched them up for 155 yards and a touchdown. With Corey Davis set to miss this game, Crowder becomes the WR1 by default. This Week 9 NFL Thursday Night Football pick rests on a Crowder line projection of at least 100 yards and a touchdown.

If you’ve ever needed a receiver to bank you at least five catches and somewhere around 40 yards this season, Zach Pascal has been your guy. For the better part of his 2021 campaign, Pascal has managed to hover around that stat line with and without T.Y. Hilton on the field. In the Colt’s opening game against the Seahawks, he caught 4 of his 5 targets for 43 yards and 2 touchdowns. The next week against the Rams, he caught 5 of 6 targets for 38 yards and a score. Outside of Week 6, his lines have remained mostly constant. The only thing that has changed is the fact that he has yet to find the end zone since his Week 2 trip. Last week against the Titans, he finished the game second only to Michael Pittman in total targets.

Wide receivers with 7+ targets inside the 10-yard line:

This week, he will once again find himself on the field without Hilton. His fellow wideout was forced out in the fourth quarter of last week’s game with a concussion. Hilton has already been ruled out for Thursday night’s game leaving the door open for Pascal to gain value. He and his team will find a decent path to success against a not so good Jets pass defense. New York enters the week among the worst in the league in terms of passing yards allowed. Last week, they allowed Tee Higgins to reach 97 receiving yards. They also gave up receiving touchdowns to Ja’Marr Chase, and Tyler Boyd. Pascal clearly has a chance to return solid value on his affordable flex price. It is hard to shine when Jonathan Taylor soaks up the sun, but a full Colts stack is easier with Pacal’s salary relief.

It’s been hard to be excited about the fantasy prospects of Elijah Moore this season. So far, the rookie has fallen victim to the woes of his entire team. His opportunities have come in fits and spurts without a true breakout game to show for it. On top of all of that, his only touchdown this season has come on a 19 yard toss sweep two weeks ago. Although, last week was his best overall outing of his rookie campaign. In the win against Cincinnati, Moore caught all six of his targets for 67 yards. It’s worth noting that this performance also coincided with Mike White’s start. Whatever it was that sparked in the Jet’s offense, Moore certainly benefited from it. The rookie hasn’t lived up to his second round draft price yet. That actually may have started to change after last week.

Much like Crowder’s stock will rise this week in the absence of Corey Davis, Moore also sees a rise in value. Also, as already established, the Colt’s have a propensity to give up receiving touchdowns. All things considered, this could very well be the week the rookie gets his first proper receiving touchdown. It’s highly possible that White will not come anywhere near his 400 yard total of last week. Even still, the Jets will still need to throw the ball in this game if they want to stay competitive. Moore now finds himself second on the depth chart with a golden opportunity to show off his skills on primetime television. Look for him to take it and make this Week 9 NFL Thursday Night Football pick one that has you in the green at the end of the night.