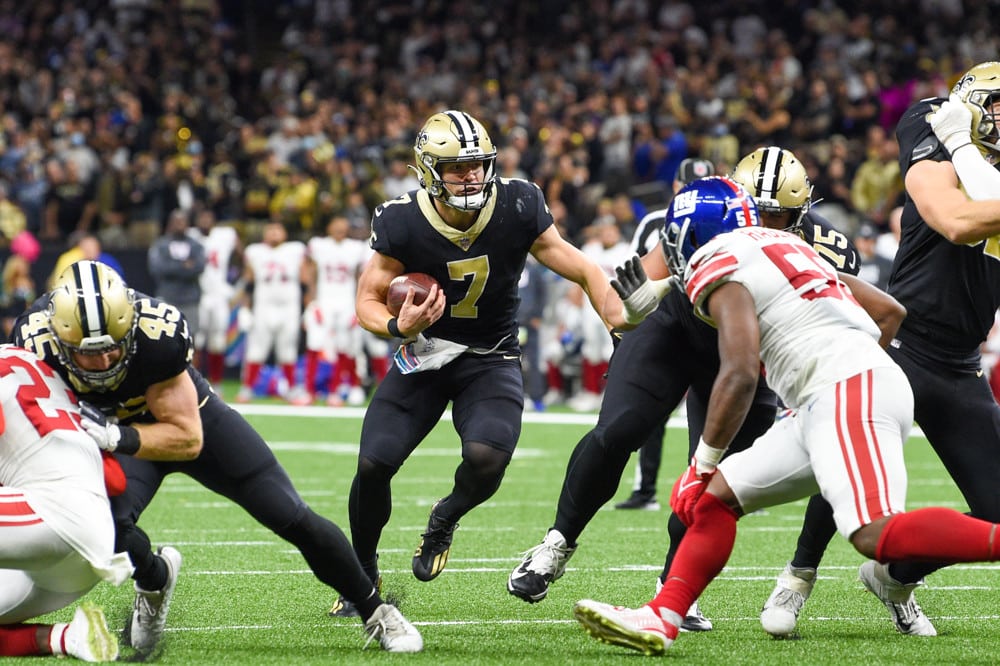 With eight weeks of the NFL season in the books, it is time to start preparing for some upcoming bye weeks. As your team will be missing some key contributors, it is time to find suitable replacements on the waiver wire. However, opposing managers have the same dilemma so a ton of FAAB balance will be spent this week. This article will be a guide about which players to target for Week 9 with your FAAB balance.

If you are looking for a temporary RB2, then you should be targeting Adrian Peterson. After remaining unsigned for several months, the Tennessee Titans officially signed him to the practice squad on Monday. With Derrick Henry now out indefinitely due to foot surgery, Adrian Peterson will become the starting running back in the foreseeable future. Plus, Tennessee’s other running backs are a bit undersized so Peterson should receive the bulk of the red zone work. Use 20% of your Week 9 FAAB to acquire him off the waiver wire.

Even though most NFL teams have a clear QB1 on the depth chart, New Orleans is not one of those. Starting quarterback Jameis Winston tore his ACL against Tampa Bay which means that the Saints will need somebody else to take snaps under center. Last week, it was Trevor Siemian who filled in. However, that was partially due to the fact that Taysom Hill was still dealing with a concussion. Now, Hill is expected to be active for the Week 9 game so he should be the starting quarterback. With his elite rushing upside, he is an extremely underrated quarterback option for the remainder of the season. Use 12-15% of your Week 9 FAAB to land this guy off the waiver wire.

After being a complete nonfactor for the first seven weeks of the season, Carlos Hyde finally received a decent amount of playing time last week after James Robinson suffered a foot injury. With Robinson out, Hyde recorded 15 touches for 72 total yards as he was consistently used within the offense. While Robinson’s return would kill his fantasy value in the immediate future, stashing him as a handcuff would have merit because of the heavy workload that he would receive if Robinson got injured once again. Use 5-8% of your Week 9 FAAB to acquire him.

In Week 9, the Las Vegas Raiders return to action following a bye week. As a result, it is time to target quarterback Derek Carr. So far this season, he has 2,269 passing yards and 12 passing touchdowns. Plus, he has an extremely favorable schedule over the next three weeks. He will get to face New York, Kansas City and Cincinnati so expect him to put up some big numbers. If he is still available in your league, then you need to add him. Use 5-7% of your Week 9 FAAB to acquire him.

After missing several games due to injury, Rashod Bateman is starting to show people why he was a quality prospect. In Week 7, Bateman played in 63% of the offensive snaps which makes him the WR2 on the roster. Plus, he made the most of that opportunity since he recorded three receptions for 80 yards. While he has yet to put up massive numbers, the upside is there and his role should increase moving forward. Use 5-6% of your Week 9 FAAB to snag him off waivers.

Rashod Bateman averaged 26.7 yards per catch yesterday with three going for 80 total yards. All seven of his first NFL catches have picked up first downs. pic.twitter.com/ZAEWq2DCq3

After limiting Kirk Cousins and Minnesota’s offense to just 16 points last week, Dallas Defense will be a “must-own” unit for Week 9 due to its upcoming matchup against Denver. The Broncos have scored less than 18 points in each of their last two games as they have struggled to sustain long drives recently. Plus, Denver is allowing 3.1 sacks per game which is tied for the third-most in the league. As a result, I expect to see the Cowboys generate a ton of pressure throughout this game. Use 2% of your Week 9 FAAB to acquire one of the most underrated defenses in the league.

If you are tired of streaming kickers every week, then Daniel Carlson is a “must-add” for your fantasy team. So far this season, Carlson has recorded at least two field goals in five of the first seven games as he has been used quite frequently. Plus, he plays in a dome stadium so the weather is not a factor for at least half of his games. Carlson is averaging the eighth-most fantasy points per game for kickers and yet he is only on 32% of rosters. Use 2% of your Week 9 FAAB to acquire him.

If you are looking for an extremely cheap quarterback, then Mike White might be an interesting option. Last week, White was unstoppable in his first career start as he recorded 405 passing yards and three passing touchdowns. While that level of production is unsustainable, he does face off against an Indianapolis defense that allowed 34 points last week. Therefore, he has a quality matchup in Week 9. While the media might overreact to his performance last week, most fantasy managers will avoid him because he still plays for the Jets. Use 1% of your Week 9 FAAB to acquire him before somebody else does.

If you want to add a quarterback that might be available for free, then acquiring Tua Tagovailoa makes sense. Despite being an average NFL quarterback, he is still capable of putting up quality numbers against below-average defenses. Therefore, his Week 9 matchup against Houston is intriguing. Houston is allowing 253.2 passing yards per game which ranks 19th in the league so I expect Tagovailoa to have some success through the air on Sunday. Plus, Tagovailoa has recorded at least two passing touchdowns in two of his last three games.

Despite only recording 14 receiving yards last week, Zach Pascal is a cheap option on the waiver wire that possesses a lot of upside. As the clear number two receiver on the depth chart, Pascal has played in at least 82% of the offensive snaps every week so he will always have a quality workload for fantasy football purposes. Plus, he gets to face a Tennessee defense that is allowing 273.6 passing yards per game which ranks 23rd in the league so Indianapolis should have some success through the air on Sunday.

Carson Wentz zips it into Zach Pascal to get the pair's third touchdown on the season.pic.twitter.com/BZdbMffNTY

If you are looking for a cheap but risky defense, then Philadelphia Defense is an interesting choice for Week 9. Last week, Philadelphia completely shut down Detroit’s offense as it limited the Lions to just six points. In addition, the Eagles recorded six sacks while forcing one turnover. Now, Philadelphia will face off against a Los Angeles offense that has struggled a bit lately.  The Chargers have scored less than 25 points in each of their last two games and they might struggle in Lincoln Financial Field on Sunday.

If you are looking for a wide receiver that will get a lot more targets in the future, then Tajae Sharpe is an intriguing option. After being on the field for less than 29% of the offensive snaps in five of the first six games, Sharpe was significantly more involved in Week 8 against Carolina. In that game, he recorded a team-high 58 receiving yards. The main reason for the increased workload is the absence of wide receiver Calvin Ridley who decided to step away from the Falcons indefinitely. With Ridley no longer on the active roster, expect Sharpe to continue getting his fair share of targets.

Mecole Hardman – He is still the number two wide receiver on one of the best offenses in the league.

Sony Michel – He is an extremely cheap handcuff option to Darrell Henderson Jr. that has recorded at least nine touches in three of the last four games.

Jeremy McNichols – He is a pass-catching back that might get more playing time due to Derrick Henry’s recent injury.