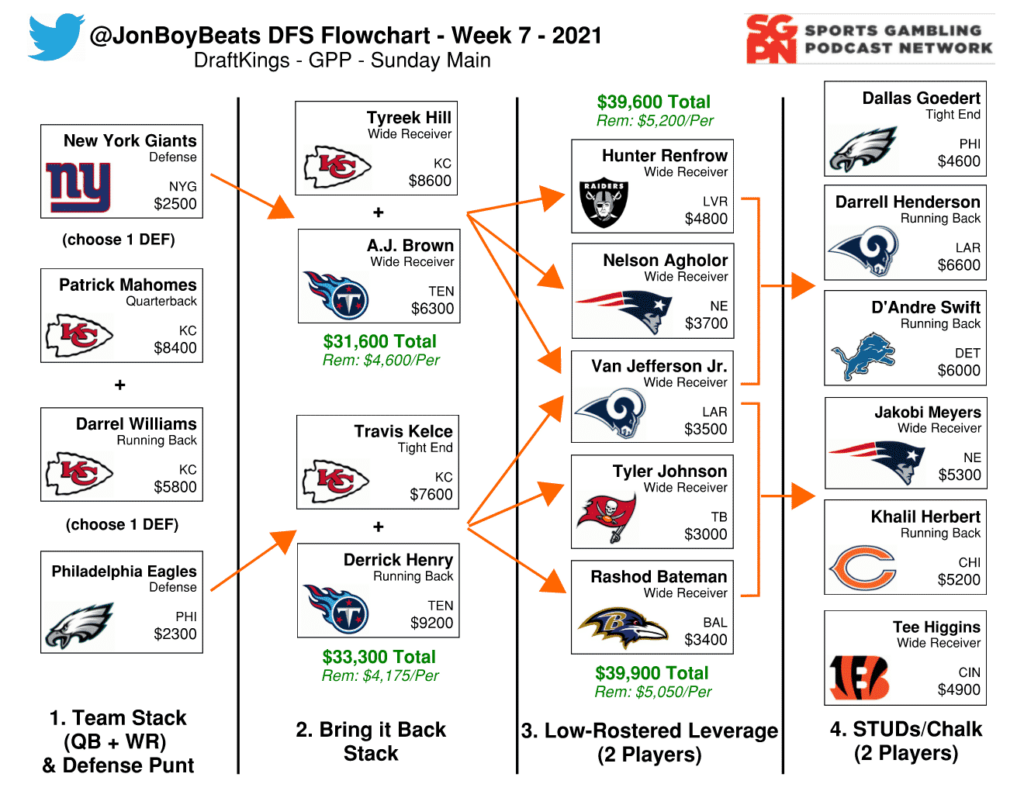 Another great week for the flowchart in Week 6! It’s always nice when the two players that are in every single lineup both end the day with red flames over their score. Cooper Kupp continues to be a cheat code and pairing him with Stafford allows for a nice ceiling. When Antonio Gibson came into the game questionable, that made our J.D. McKissic play all the much stronger and he did well as a low-rostered play. Jonathan Taylor and D’Andre Swift both got off to slow starts but hit big late, which helped fill out our stud column last week.

Week 7 brings us six teams on a bye week plus another six teams in island games, so it’s slim pickings on the Main Slate. We also have a really crazy environment where the Rams, Bucs, and Cardinals are all favored by more than 12.5 points so there are some really low implied totals. One of the pillars of playing DFS is that you shouldn’t try and outsmart Vegas too often. If we check in on some of the team implied totals, we can find four teams that are projected by Vegas to score less than 20 points. If we try our best to stay away from players on the Texans, Jets, Bears, and Lions it really helps narrow down our potential games to stack and helps us focus on the better games from a “fundamentals” standpoint.

I had a ton of fun making the flowchart this week and I think it’s because (I hope) I figured out a way to attack the game with the highest total in a really unique way. When thinking of stacking Patrick Mahomes and the Chiefs it quickly becomes tough every week because of the price tags on Kelce and Hill. It’s hard for all three of the Chiefs’ studs to hit their price tag ceilings in the same game. Of course, in a game where they have an implied total of 31 points, it’s possible, but it is pretty far from our range of outcomes.

Naturally, the next step is to spend down to a different pass-catcher to pair with Mahomes. Mecole Hardman is a natural choice this week, and he projects very well. Unfortunately, I just don’t think Hardman is very good at football and I don’t want to lock him into every lineup this week. That leaves us with Darrel Williams and the not-so-popular onslaught approach. Playing a game with an onslaught approach is typical in Showdown slates if you go with 5-1 builds. It can also be popular in main slates if you fire 4 players from the same team into a lineup. The approach I am taking this week is loading up on the Chiefs passing and rushing game, and just rooting for them to clear the 40 point mark.

Once you lock in Darrel Williams, you can take your pick of Tyreek Hill and Travis Kelce. Both are in their “natural” price ranges this week so they aren’t necessarily a steal but of course, they are projecting really well due to the game environment.

I already touched on why Hardman with Mahomes is going to be a really popular approach, but there’s another way we can get different through the bring-back options. The Titans are typically easy because when healthy, they essentially have two stud receivers in Julio Jones and A.J. Brown, and not a whole lot else. This is why I love the Derrick Henry play this week.

Of course, the guy is on a complete tear lately and has been piling up big game after big game. He is also expensive and hard to pair with the expensive Hill and Kelce price tags, but I decided to confront that challenge head-on this week. I like A.J. Brown over Julio this week simply because the re-injury to Julio’s hamstring makes me more nervous than Brown’s risk of re-injury due to Chipotle.

When we look at how our lineups look in the bottom half of the flowchart this week, it really leaves us with a lot of optionality at WR. There are A TON of great combinations and I couldn’t fit them all in The Flowchart. I am going to advocate right now to fill in those three WR spots with as many correlations or mini-game stacks as possible. It should be a lot of fun playing around with lineups tomorrow morning.

Typically, when you work your way through The Flowchart, you will want to stay near the top or bottom of Columns 3 and 4 in order to make the salary fit the best. However, this week it is much less restrictive. I would encourage mixing and matching a lot of the players in Columns 3 and 4 this week and I think 20+ strong lineups are well within the range of possibilities.

With Antonio Brown out, I expect Tyler Johnson to step into his role as he did in Week 3 against the Rams when he posted a 3-63 line. At the bare minimum of $3000, he is a great play. With the heavy salaries we have at the beginning of the flowchart, we are going to have to hit on some of these low-priced receivers. Rashod Bateman and Nelson Agholor are my two favorites, but it’s tough banking on any of these guys for a really strong floor. Definitely mix up your different combos across lineups.

Darrell Henderson Jr. is the most obvious cash play of the week as he somehow didn’t get much of a price hike after a big week. There are some combinations that fit him in so feel free to ride that chalk after grabbing some low rostered pieces in Column 3. I don’t mind playing Dallas Goedert at his price tag since Zach Ertz is no longer on the team. Goedert doesn’t project perfectly, but I like the ceiling in this game with the Raiders. Khalil Herbert has an extremely tough matchup with the Buccaneers defense but I like the price tag and he fits the flowchart well.

I want to repeat, the importance of trying to increase the secondary correlations this week as we have one or two more open WR spots given the way the beginning of The Flowchart is set up.

Good luck this week! I hope to see some screenshots at the top of the leaderboards.