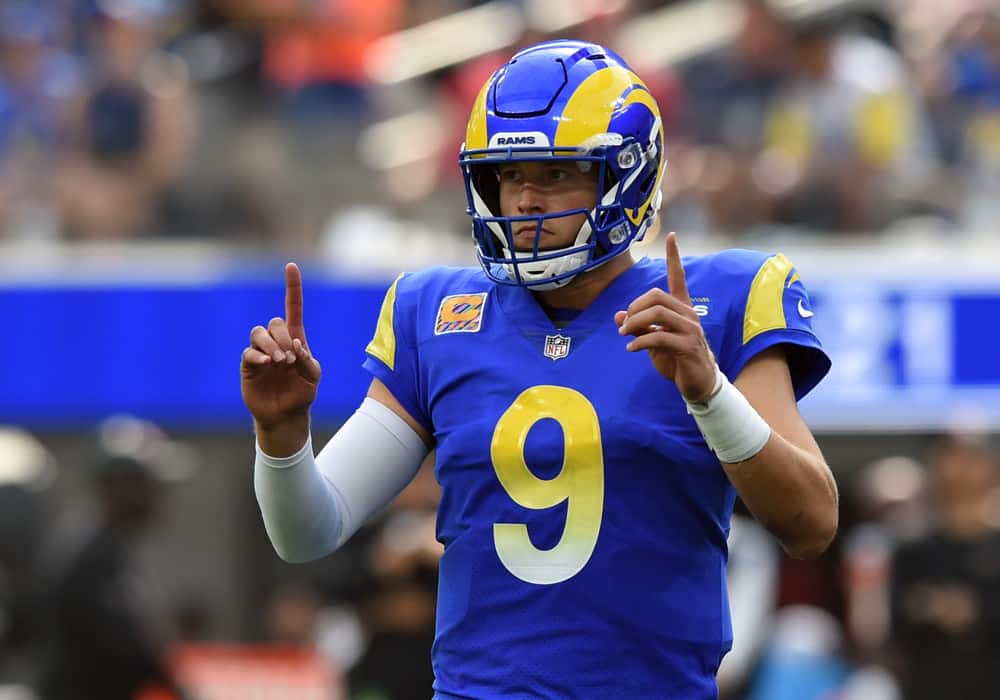 Each week I will bring you my “DraftKings Price Changes and Values” article highlighting and analyzing the weekly DraftKings price changes and here is the Week 7 version. I will identify players who have been “Priced Up” and players who have been “Priced Down” and let you know the players you should “Play” and players to “Fade” in your weekly Cash game and GPP tournament lineups. We are watching all the DraftKings values and players changing prices heading into Week 7.

The 6-0 Arizona Cardinals are 17 point favorites against the Houston Texans and Kyler Murray is priced up $600. We all think that Murray and the Cards are going to smash the Texans. Murray is averaging over 26 points per game which makes him a tremendous Cash game option and also a viable GPP pay up play this week as well.

Aaron Rodgers is facing the 32nd ranked defense against quarterbacks this week. The Washington Football team is giving up a whopping 27 points per game. He should be priced up to $7,800. Rodgers is one of the best DraftKings Week 7 price values this week. He’s my Cash darling this week.

Matthew Stafford already has 16  touchdowns so far this season. The Lions have -16. That’s a joke. The Lions have 12 total team touchdowns, but you get the point. Matthew Stafford is on a mission to win a super bowl. The revenge narrative has been thrown around this week, but in reality, Stafford and the Rams are just way better than the Lions. I love Stafford to pass for over 300 yards and three touchdowns. He’s a great Cash game play with GPP value.

Matthew Stafford ahead of facing the Lions: "I'm extremely happy to be here."

"As far as comparing it to Detroit, I'm not gonna do it," he said. "I loved my time in Detroit. I loved all of my experiences – some of them were tough, but they helped mold me." pic.twitter.com/hGwbGe817Y

Tom Brady is coming off a 19 point DraftKings disappointment last week against the Philadelphia Eagles. This week he faces a Chicago Bears defense that is only giving up 17 fantasy points per game to quarterbacks. Last week Aaron Rodgers scored 24 points and declared that he owned them. It’s not looking good for them this week either as they head to face Tompa Bay. Tom is always a GPP hand grande waiting to go off.

Tom Brady will face Justin Fields, the first Ohio State QB to start against the former Michigan star. His response is worth the time. pic.twitter.com/N4O5Emd3h4

Joe Burrow has scored over 20 points each of the last three weeks. The Ravens are 13th against the quarterback position, giving up only 17 points per game. They are even better against wide receivers, ranking 6th and giving up only 31 points per game. The Bengals are only getting 20 implied points this week, I think that Burrow plays well, but I’m not confident in playing him in Cash or GPP tournaments.

The bloom is off the rose for Taylor Heinicke, failing to score over 12 points after three straight weeks scoring over 23.  This week he faces the Green Bay Packers, who give up 18 points per game to quarterbacks. The game script predicts that Heinicke and the Football Team will be trailing and throwing the football to end the game. Garbage time is real folks. GPP for me.

Derrick Henry is the King. He should be priced up at 10K, but I’m not complaining, I’m playing him. He’s a pay up Cash game lock this week against a Chiefs’ defense that has given up over 500 yards and six total touchdowns. Based on his DraftKings Price Changes and Values this week, I’m not fading him in GPP tournaments but will be more Cash heavy.

According to RuntheSims.com, Aaron Jones has a top three ceiling this week against the Washington Football Team.  Jones is a great Cash game play this week in a matchup with a 10 point home favorite. I’m not fading him completely in GPP tournaments, but I prefer A.J. Dillon for his DraftKings Price Changes and Values upside.

Crazy to see these RBs in 2021 as Must Starts with RB1 Production through 6 weeks.

Miles Sanders has been a huge bust this season, scoring ZERO touchdowns so far through six weeks. The Raiders on the other hand have given up five rushing touchdowns and two receiving touchdowns to running backs. Something has got to give in this matchup and I think Sanders finally takes it to the house this week. He’s strictly a GPP play for his upside this week.

A.J. Dillon only has eight fewer carries than Aaron Jones over the last three weeks. The Washington Football Team gave up two rushing touchdowns last week and are currently 10 point road dogs to the Packers. The game script favors Dillon being used in the second half to bleed the clock out and pad his stats. I love him in GPP contests and will also be paying down for him in Cash games.

“I just can’t get enough of the quadfather. An all purpose powerful runner who’s pass catching skills are highly underrated by PFF.” pic.twitter.com/lul4ZP8dLH

Cooper Kupp leads all NFL wide receivers, averaging 27 DraftKings points per game. This week he is priced up $500, but he’s worth it. PFF projects Kupp with the top cornerback matchup of the week against the Detroit Lions. Matthew Stafford might not be approaching this week as a revenge game, but you know he wants to play well and help his team win. I expect Kupp to still see his 11 targets per game and be a great Cash play.

Antonio Brown has been electric this season, averaging over 20 points per game and trailing Mike Evans by only two DraftKings points. This week PFF gives Brown a top 5 matchup against the Chicago Bears cornerbacks, who give up over 38 points per game. He was in the Milly Maker in Week 5. He is LIVE for GPP and not a terrible play in Cash either.

Jaylen Waddle has seen 23 targets in the last three weeks. Tua Tagovailoa is back and is locked in on Waddle, 13 targets in Week 6 alone. Waddle exploded last week for two touchdowns on 10 receptions for 70 yards. I am not expecting a 20 point outburst this week, but Waddle is a solid Cash game play who should see 7-9 targets against a Falcons defense that has given up over 38 points per game.

The bad news is that last week D.J. Moore disappointed, only scoring 11.9 DraftKings points. The good news is that he saw 13 targets and is currently tied for third with 63 targets through six games. The New York Giants just gave up 51 points last week to Matthew Stafford’s wide receivers. I expect Moore to score and post over 100 receiving yards in this matchup. Moore is live for all GPP contests and is a Cash play as well.

Calvin Ridley is back!! What a week to be back too. The Miami Dolphins rank 30th against wide receivers, giving up 44 points per game. I know that Ridley has been a huge disappointment this year, averaging only 14.6 points per game, but this week he bounces back in a big way. Ridley is one of the best DraftKings Week 7 price values on the whole slate. I will be splashing him in Cash and playing him in GPP as well.

Mark Andrews is averaging one less point per game than Travis Kelce, but he’s $1,600 cheaper with a better point per dollar value this week. The Cincinnati Bengals have been stout against tight ends so far this season, but last season they gave up 10 receptions for 83 yards and a touchdown to Andrews. He’s averaging seven targets a game with 9.6 yards per target, with three scores in his last two games. I will be playing Andrews in Cash.

Mark Andrews and Marquise Brown have combined for 39 receiving TD since the start of the 2019 season.

They trail only Tyreek Hill and Travis Kelce (46) for the most receiving TD by a WR-TE duo in that span. #RavensFlock pic.twitter.com/bNF1LIsPY0

Kyle Pitts went off in week 5 in London, posting career highs in receptions (9), receiving yards (119) and he also scored his first touchdown. Last week Pitts was on a bye and most of us were hoping DraftKings might forget about him. Nope. He was priced up $1,200 this week to $5,900, his most expensive price to date. Given how poorly Miami’s defense has played the last few weeks, even with the price hike Pitts is a full go for GPP tournaments.

Zach Ertz is long gone, traded to Arizona last week. Dallas Goedert now projects out to 7-9 targets per week given lockdown on the Eagles’ tight end target share. This week, Goedert faces the Las Vegas Raiders, who give up over 17 fantasy points per game to tight ends. Look for Goedert to smash his 3x and hit 4x value this week. He’s a lock for Cash and has GPP value as well.

The Baltimore Ravens give up close to 19 fantasy points per game to tight ends. C.J. Uzomah has been averaging over 13 points the last three weeks, catching 10 of his 11 targets for 121 yards and three scores. For $3,000, you are chasing that touchdown upside and the potential 4x that comes with it. I’m rolling with Uzomah for GPP tournaments, the larger the field the better.