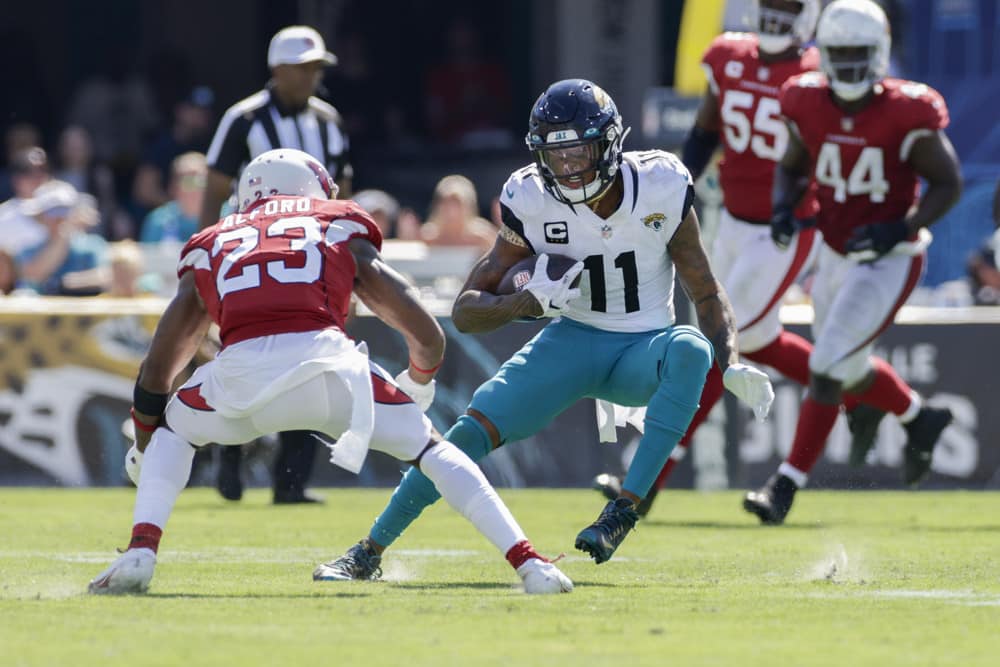 For better or for worse, the Week 4 NFL Thursday Night Football matchup pits the Jaguars against the Bengals. The world will finally get to see Trevor Lawrence, the first overall pick in this year’s draft, play on the main stage. The learning curve has been steep for the rookie so far and this week does not get any easier for him. He’ll face a Cincinnati team that’s hanging tough in a heated battle inside the AFC North. It is likely to be too much to handle in what has been a rocky start to his career.

This scenario will obviously lend itself to the usage of Joe Mixon. The Bengals will no doubt end up running the ball with the lead for a better part of the second half. With that in mind, filling out the rest of your lineup will require a touch more digging. These four suggestions can serve as a head start to your research.

It’s been all smiles so far this season for the fifth overall pick in this year’s draft. In two out of his first three games, Ja’Marr Chase has topped 22 fantasy points. This includes his two-touchdown game last week against the Steelers. He and Joe Burrow seem to have reignited the spark they had at LSU in Cincinnati. That spells trouble for teams going forward. Chase passed the injured Tee Higgins for the second-most targets on the team. He sits a mere three targets short of Tyler Boyd for the lead. That said, Chase has outperformed his Boyd in two of the three games this season. The rookie is trending in the right direction for an even bigger game on the national stage.

Ja'Marr Chase has 4 TDs in 3 NFL games. Half of those scores came on Sunday. @Real10jayy__ pic.twitter.com/T86jaFRieq

He’ll get that shot against a highly exploitable Jaguars secondary. In every game so far this season, the Jacksonville defense has allowed at least one opposing receiver to top the 100-yard mark. Last week, the Cardinals boasted two of their wideouts over that mark. If A.J. Green and Christian Kirk can more than 100 yards against this team, imagine what Chase and Boyd can do to them. It seems safe to project that the Bengals will exploit this weakness with effectiveness early in the game. With Tee Higgins still likely on the shelf, Chase should easily factor into the mix again. All the makings are there for a bountiful fantasy performance. You should load him into the captain’s spot as much as you can.

On the whole, Jacksonville has not started the season as they may have hoped. Their number one overall pick and new franchise quarterback, Trevor Lawrence, has had professional growing pains. As such, the overall offensive performance has suffered. This suffering has extended of course to the running game and James Robinson. Over the first two weeks of the season, the second year back did not reach double-digit fantasy points. The game script forced him to touch the ball less than 15 times in both of those contests. Last week though, Robinson finally looked like the rookie version of himself. He registered 15 carries for 88 yards and a touchdown despite the Jags getting blown out by the Cardinals. More importantly, he caught all six of his targets for an additional 46 yards. All told, he got back on track in style with a tidy 25 point fantasy day.

Maybe Jacksonville finally figured out how good their running back can be when given the chance. Maybe, they’ll decide to get Robinson involved earlier in the passing attack in their matchup on Thursday. It would be wise to do so as this Bengals defense is fresh off the heels of allowing Najee Harris to catch 14 passes for over 100 yards last week. Not to mention, even Dalvin Cook caught six passes for 43 yards on them in the opening week. A steady dose of Robinson may be the only way the Jaguars can hope to compete. If he gets the most touches on the team again this week, he should be rostered in your Week 4 NFL Thursday Night Football DraftKings lineups.

Most of the offseason fantasy buzz in Jacksonville was centered around Lawrence and what he could do with fellow youngsters, Laviska Shenault Jr., and D.J. Chark Jr. Yet, another Jr. has brought a veteran presence to the wide receiver room. Free-agent Marvin Jones Jr. has established himself as the number one wideout on the team. Jones has been targeted 28 times by his rookie quarterback. That number is six more than second-place Chark and eight more than Shenault. The veteran has not disappointed with his opportunities. He opened his time in Jacksonville with a touchdown in the first two games. He also has had at least five receptions and 50 receiving yards in all three of his games this season. Trevor Lawrence needs to continue to lean heavily on the senior pass-catcher if he hopes to do anything at all this week.

Realistically speaking, a solid fantasy day for Jones against the Bengals is not entirely impossible. In week one, Adam Thielen took the Cincinnati secondary for 92 yards and two touchdowns on nine catches. Last week, Chase Claypool also caught nine balls while gaining 96 yards on the defense. In what figures to be another game in which Jacksonville will struggle, adding the main weapon in the passing game to your roster is the play. He’ll be a key cash game piece in your Week 4 NFL Thursday Night Football DraftKings showdown builds. You can possibly consider him as a captain with a sizable ceiling if he can reel in a score or two.

Season-long fantasy players who like to stream defenses, already know the team facing the Jacksonville Jaguars is fantasy gold. So far, the Jaguars have surrendered the ball nine times this season. Trevor Lawrence has accounted for all of them as he’s thrown seven interceptions and lost two fumbles. He’s also been sacked five times in his first three games as well. What’s more, is the Jags haven’t scored more than 21 points in a game this year. Team defenses have scored double-digit fantasy points against Jacksonville in each of the last two games.

On Thursday night, the Bengals’ defense will be the lucky ones who get to sink their teeth into this offense. They are entering the game hot off a two-interception performance against Ben Roethlisberger and the Steelers last week. They managed to get into the Pittsburgh backfield enough to sack Big Ben four times and only allowed the Steelers to score 10 points. It was the third week in a row with at least three sacks in a game. It was also the second week in a row with at least one interception. Thursday night games tend to be more defensive so go ahead and load up on the defense facing the worst team in the league.