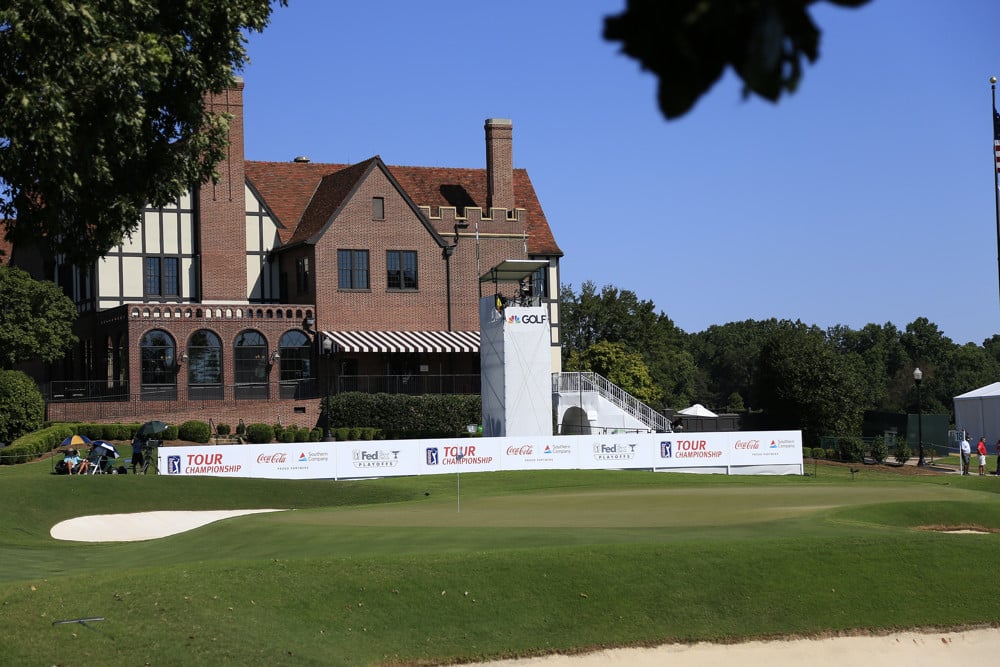 This is it! The 2020-2021 PGA Tour season has reached the final event of the season. A 30 man field heads to East Lake Golf Club for the 2021 Tour Championship. As always, here is your early deep-dive on the Tour Championship and a preview for how to bet.

Following the conclusion of the BMW Championship, a staggered start will set the field for the Tour Championship. Leading the way is Patrick Cantlay, who will start the tournament at -10. Bryson DeChambeau simply could not put Cantlay away down the stretch at the BMW Championship. And Cantlay drained clutch putt after clutch putt to will himself to the win. He’ll start the tournament with a 2 shot lead over Tony Finau, who starts at -8.

Here’s the full rundown of where everyone is starting for the Tour Championship:

In past columns and on the Golf Gambling Podcast, I’ve gone through great lengths to criticize the farce that is the format of this event. For god’s sake, Patrick Reed hasn’t played a single playoff event yet still qualified for the Tour Championship. That tells you everything you need to know about how dumb this whole thing is. If you want to re-hash all my gripes, look at last year’s column or download this week’s Tour Championship Preview on the Golf Gambling Podcast (dropping Monday evening) for how I’d fix the FedEx Cup Playoffs.

East Lake Golf Club is the oldest golf course in Atlanta and was the home course of the legendary Bobby Jones himself. While it was first built in 1904, it was redesigned by Donald Ross in 1913, adding yet another titan of the game to the Club’s lore. Donald Ross redesigned both the No. 1 and No.2 golf courses on the property, with both nines ending at the clubhouse. Its status as a prestigious southern golf course was subsequently elevated, with the Club hosting numerous notable amateur tournaments as well as held the Ryder Cup in 1963.

Over the years, the reputation of East Lake Golf Club deteriorated due to suburban flight and decay in the surrounding city neighborhood. This changed in 1993 when local businessman Tom Cousins purchased the Club with the intent to both inject capital into the surrounding neighborhood to revitalize it, as well as restore the golf course to the original Donald Ross design. Cousins brought in Rees Jones in 1994, the son of Robert Trent Jones and responsible for redesigns such as Torrey Pines and Bellerive Country Club, who lengthened the golf course, re-positioned and re-shaped the bunkers, and restored the greens to the original Donald Ross specs.

This was enough to attract the PGA Tour to bring its Tour Championship (which at that time was played in the fall) to East Lake in 1998, and starting in 2005 it became the permanent home of the season finale of the PGA Tour:

The property essentially sits in a giant bowl, with both the front and back nines playing uphill starting at East Lake to the far eastern and western edges of the property. Most of the hallmark Donald Ross design features are here. Narrow fairways, strategically placed fairway bunkers, and thick Bermuda rough make the golf course a demanding one off the tee. It’s vital to hit from the fairway at East Lake to get close to pins.

The greens and bunkers were renovated to a Donald Ross style. The greens have significant undulations and are raised well above the greenside bunkers. But the charm of the greens kind of gets lost with how brutal it is to get there. With the narrow fairways, thick rough and multiple fairways bunkers in the landing zone, this plays more like Torrey Pines than a traditional Donald Ross. All in all, there’s nothing truly special about the venue of the PGA Tour’s season finale.

East Lake Golf Club is a Par 70 and runs 7,346 yards long. That’s realistic yardage to where players actually play form. Unlike other golf courses that can be shortened by hitting over doglegs, everything is all right out in front of the player. There are very few shortcuts to be had at East Lake where a bomber might gain an edge over the field.

The golf course is wall-to-wall Bermuda. The thick Bermuda rough makes hitting the fairway very important. This isn’t an easy task considering how narrow the fairways are at the golf course. Driving accuracy rates tend to be around 63% at East Lake, which is slightly below average for the PGA Tour. Players hit the green in regulation at East Lake at around 66%, which is about the PGA Tour average.

There are two ways to bet on this tournament. The first is to approach this tournament like any other one – a 72 hole stroke play event. Books will offer pre-tournament odds on the lowest 72 hole score of the tournament that excludes the staggered leaderboard start. That means assessing the golf course as is and what styles it suits.

As mentioned earlier, East Lake Golf Club is quite demanding tee-to-green. Every hole that plays away from the clubhouse is uphill, making all those holes much longer. The narrow fairways and positioning of the fairway bunkers create lots of pitfalls for a player. The tee shot on 8 is also really difficult. Water looms all the way on the left, while a trio of fairway bunkers await tee shots between 285 and 320 yards away from the tee box. That’s even difficult for Bryson to carry.

After successfully hitting the tee shot, most players hit from the following distances into the greens:

The above chart is from 2020, but this range is consistent going as far back as 2017. This chart makes a lot of sense based on the topography of the golf course. The uphill holes play very long off the tee. That creates more than average longer approach shots into greens. Three of the Par 3’s play in excess of Par, while the 197 yard 2nd can play over 200 depending on the pin position.

The downhill holes, however, play much shorter than the scorecard yardage. Players can carry it far down the hill to prime positions. That yields more than average short irons into greens as well. While players still hit their fair share of mid-irons into greens, it’s at a much lower rate than average on the PGA Tour.

Lastly, the greens at East Lake are Bermuda. Target players who excel putting on Bermuda. Historically, however, the importance in putting and chipping is diminished when compared to ball striking. These areas should probably be used only for tiebreakers.

All in all, players who excel in SG-OOT and Approach metrics are good bets this week. Recent 72 hole score winners were Xander Schauffele (twice), Rory McIlroy (twice), Tiger Woods, and Jordan Spieth. These were some of the most efficient players tee-to-green in their respective seasons on the PGA Tour. The cream rises to the top of the leaderboard at East Lake.

The other way to bet on the event is who will win the Tour Championship itself. This factors in the staggered leaderboard. The odds are adjusted accordingly to strongly favor those towards the top of the leaderboard to begin the tournament.

Bettors may look at Patrick Cantlay’s 10 shot advantage over the last-placed golfer and think it’s not all that insurmountable. But the bettor would be ignoring both how the golf course scores as well as how this staggered scoring really does narrow down the list of winners too, at best, 10 players.

For starters, East Lake only has two Par 5’s. That’s two fewer scoring holes to make up the deficit. In addition, winning scores under par at East Lake (excluding the staggered start) don’t normally escape the low teens. Prior to the staggered starts, the winner’s score has ranged from -9 to -13 and the median score per round is even par. Only 48% of all rounds completed at East Lake are under par. There aren’t a lot of opportunities to make a ton of birdies and make up a deficit of more than 5 or 6 strokes.

Consider this – Xander Schauffele completely waxed Dustin Johnson over the course of 4 rounds at East Lake. Xander was -15 over 4 rounds, besting Dustin Johnson’s -11 score. But there was zero doubt on Sunday who was winning the Tour Championship. Dustin Johnson had amassed such a huge lead by starting at -10 that no one truly threatened to take him out over the weekend.

The cards are stacked against someone starting at -3 or worse to actually win the FedEx Cup. If you’re looking at placing a bet on who will lift the trophy on Sunday, it better be someone starting at least at -4. There’s the possibility that someone like Rory McIlroy or Xander Schauffele can make a charge to get close. Realistically, however, the field has been reduced to a group of 10 players who can actually lift the cup.

Lastly, here’s the group of players who have gained more than 1.5 strokes per round at East Lake (minimum of 10 rounds):

With the exception of Billy Horschel, every player on this list are tee-to-green monsters. This list is a great preview of who should do well at the Tour Championship.