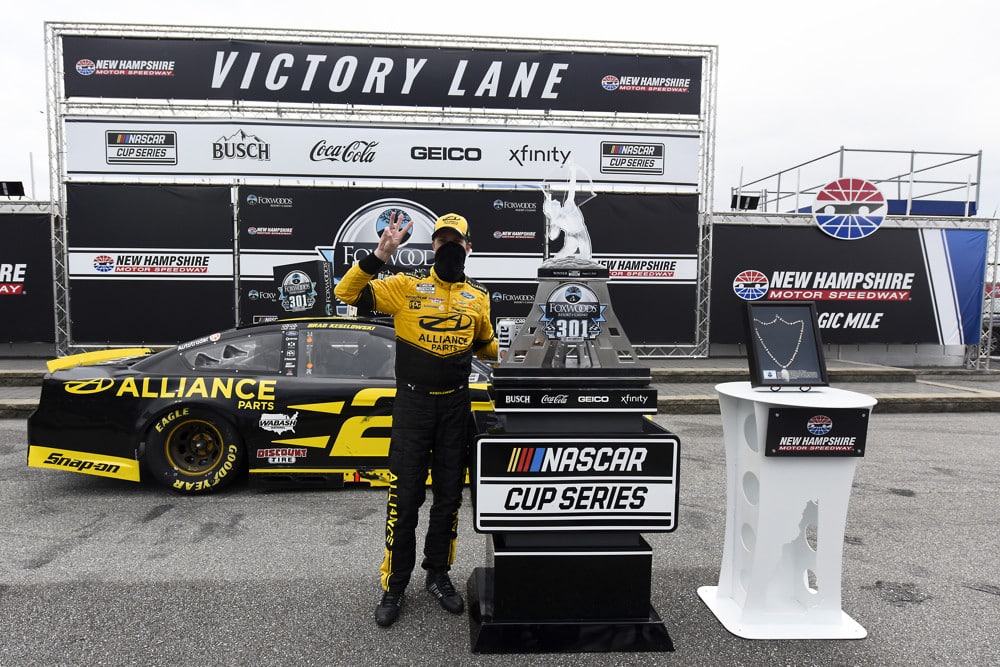 In what will be the last race of the month, Loudon, New Hampshire plays host to the Foxwoods Resort Casino 301 this Sunday. After this weekend, NASCAR will take a brief, and unusual two-week break so NBC can throw all of its weight behind the Olympics. Many drivers will use this as an excuse to push their limits for 318 miles around the “Magic Mile.” Some will be auditioning for a new ride next season. Needless to say, there are several plot lines on Sunday that will make the racing exciting and your DraftKings rosters even more fun to build.

You’ve heard the same story most of the season; Kevin Harvick runs well at this track. However annoying it may be to hear week after week, it doesn’t make it less true. So, forgive another obvious Harvick suggestion this week as he visits a track on which he’s won three of the last six races. What’s more, in his 37 career starts, he’s had 21 Top 10 finishes and 13 inside the Top 5. He’s also no stranger to dominating on this track as well. In the Fall of 2015, he started in second place and led 216 of the possible 300 laps of the race. Unfortunately, he was three laps short on gas which resulted in a 21st place outing instead of the win. In both the 2018 and 2019 races, Harvick started from the 14th position. He won both of them.

This exchange between @KevinHarvick and @KeelanHarvick on what happened to Kevin's lobster trophy for winning at @NHMS is priceless! pic.twitter.com/j9bRDz5rfU

Harvick is still winless this season and would love nothing more than to lock in his playoff position before this upcoming break. He’s sitting in a favorable spot to do so without a win. That said, you have to think the #4 car will not feel comfortable until he’s assured a spot at the table. He’s logged 15 Top 10 finishes this season including three in a row to end the month of June. July has not been equally as generous as he finished just outside of the Top 10 in Atlanta last week, and 27th at Road America the week before. He will look to turn that around and finally notch his first win of the season in Loudon this weekend.

The last driver not named Harvick to win a race at the New Hampshire Motor Speedway was Brad Keselowski. Last season, the #2 car took the checkered flag after leading 184 laps of the 2020 Foxwoods Resort Casino 301. It was one of the 13 overall Top 10 finishes in his 20 career starts on this track. What’s more, half of his last six starts here have resulted in a Top 5 finish. He also has led a total of 545 laps in Loudon to boot.

Keselowski will be showing Jack Roush what he is in store for in 2022 on Sunday. The news is, Austin Cindric will step into the #2 next year. For the last time, Keselowski will ride around Loudon in a Penske Ford. He’s been behind the wheel of one for the last ten seasons. His 2020 campaign hasn’t been full of stellar moments, but he has a stamp for the playoffs already in his passport. That said, with the current news, this means that Keselowski can take some big swings at winning races from here on out. One thing is for certain, all this drama will make for an exciting Foxwoods Resort Casino 301 and an even more fun DraftKings slate.

As the driver of the #43 car, Aric Almirola struggled to get around the New Hampshire Motor Speedway. In 15 starts with Richard Petty Motorsports, he managed only two Top 5 finishes. Since assuming his duties with Stewart-Haas Racing, he’s turned in finishes of 3rd, 11th, and 7th in three starts. He’s also led the only laps of his career in that span with a total of 56 in those three races. He’s definitely proven that the #10 car is fast at Loudon as he started from the pole in last season’s race.

At some point, Almirola has to catch a break. He’s had fits and spurts of productivity this season, but sustained success has been hard to come by. Last week, the #10 team took a gamble on the weather that bit them in the end. Their driver did not pit with the leaders in the midst of stage two. He then led eight laps in the hopes that the threatening rain at the time would worsen and end the race. That never happened and Almirola was forced to pit. He never fully recovered after that. That mistake has him now starting deep in the field which gives us a chance for some discounted differential points. That is of course if he can manage at least another Top 10 finish.

To be able to post back-to-back Top 10 finishes in as many races in two different cars is impressive. It also proves that Matt DiBenedetto has accrued some level of momentum at Loudon as of late. Last season, in his first New Hampshire appearance with the Wood Brothers, he turned a 19th place start into a 6th place finish.

Not the news we want and not the video I enjoyed making but here it is https://t.co/Ab6ik1bCuj

Sadly, DiBenedetto will also be surrendering his seat next season. He will give way to Harrison Burton for the 2022 season leaving the current occupant of the #21 car proving his worth to a potential new team. His last two outings have resulted in Top 10 performances including an impressive run last week in Atlanta. Two weeks ago, he led 10 laps at the Road America course on his way to a tenth place finish. The momentum is there. So too is the motivation to run upfront each and every week for the rest of the season. DiBenedetto will be an inexpensive placeholder in what could be an expensive Foxwoods Resort Casino 301 DraftKings slate.

Last season, Cole Custer made his Cup Series debut at the New Hampshire Motor Speedway. In that race, he started 14th and crossed the finish line in 8th place. While that may be the entire book on him on the major circuit, his time in Loudon as an Xfinity driver has been equally impressive. All three of his starts in the minor series have resulted in Top 10 finishes. That includes a runner-up showing in his 2019 start.

He will bring that experience into this week looking to improve on a lackluster 2021 season. He’s shown flashes here and there with 10th place finishes in both Talladega and Dover. Overall though, he’s been more of a Top 20 driver this season. This of course is where he’ll start this week. Adding Custer to your lineup is hoping that he will not lose you many points in the end. Should he manage another Top 10 finish, he’ll net you a solid return on his price. His Foxwoods Resort Casino 301 roster spot hinges on his ability to do just that.