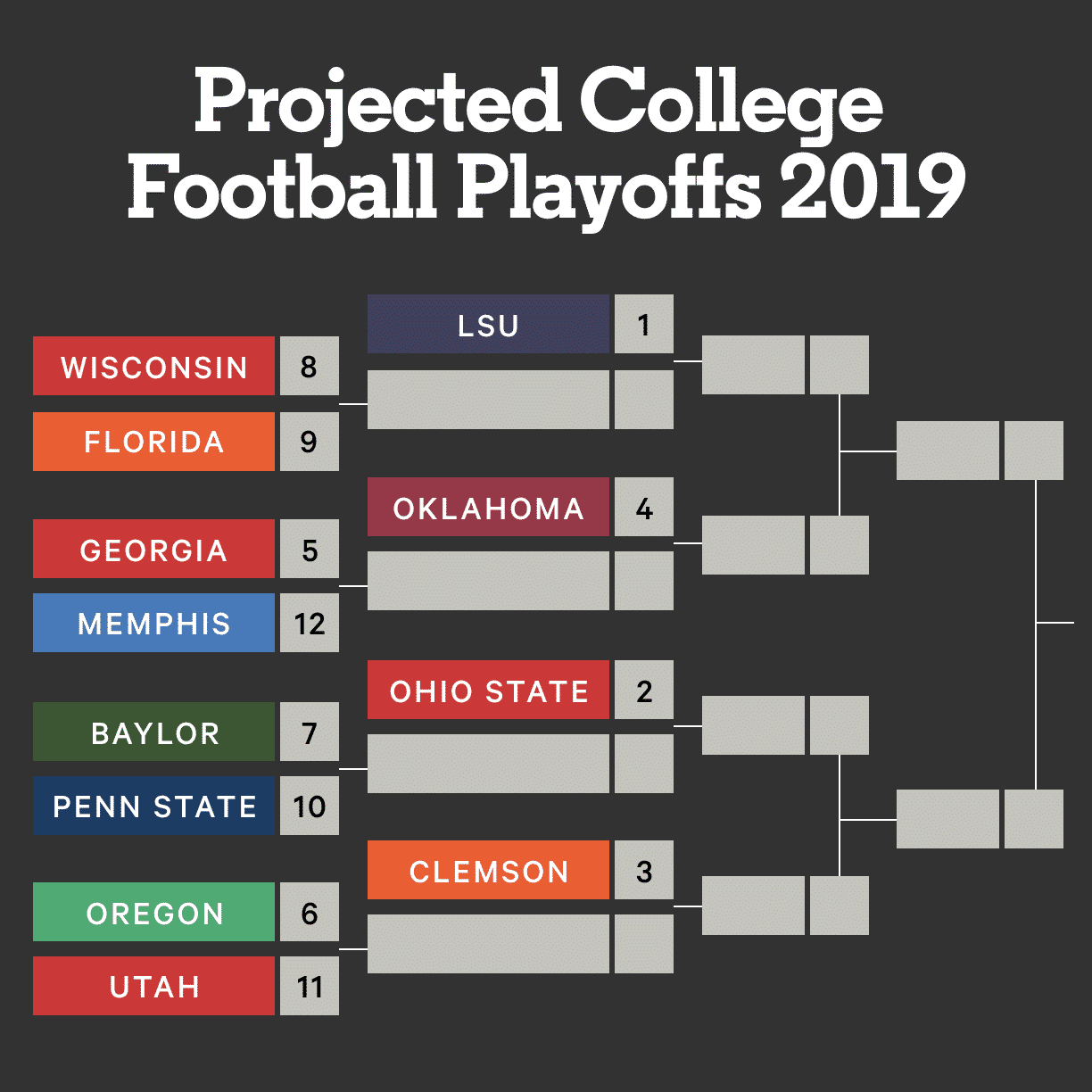 Say what? Has it really finally happened? Officially, nothing has happened yet, but all indicators point to college football finally waking up and realizing that an actual playoff with set guidelines is something the world has wanted for years.

Yes, the photo above is a look at how the newly proposed college football playoff system would look with the 2019 season. I decided to use the 2019 season since last year was affected by COVID-19, causing some teams to play a different number of games.

The Biggest Winners Of A College Football 12-Team Playoff

Yes, this does absolutely nothing to devalue the regular season. If anything it adds a ton of bigger games to the regular season and the fact that some of the playoff games would be played on campus is a dream come true for every fan base.

Plus, it helps build parity to the sport. I went back through the past 20 college football seasons and went through what a 12-team playoff would look like with the final rankings. Here’s a list of the teams that would have been dancing.

Tell me that’s not healthy for the sport. Who knows what these schools would have been able to build upon after a college football playoff berth.

Here’s a small example of how the 2019 season would have played out, thus making the college football season much more interesting.

The Conference Championships of 2019

Memphis is coming into the game at #17 in the nation while Cincinnati is #20. Memphis at the time was the top-ranked group of 5 which means there’s possibly an automatic bid on the line for this AAC Championship. This suddenly becomes a must-watch game and fans around the country basically get the playoffs a week early.

At this point in the season, #3 Clemson is undefeated and is automatic to make the 12 team playoff but #23 Virginia suddenly has a shot to perhaps make the college football playoffs. Yes, they’d have to pull the almighty upset which in actuality they didn’t even come close to but if they somehow won this game and got a little help say the group of 5’s Cincinnati & Hawaii in their conference championship then the Cavaliers would find themselves in the postseason

Both these teams were 11-1 in the regular season and this Big 12 championship game went in to overtime before Oklahoma grabbed the win. In the new system both of these teams would essentially be playing for the bye week. OU beats Baylor so the Sooners grab the bye week and now Baylor hosts Penn State in Waco but their 11-2 season with one loss being by 3 points and the other being in overtime of the Big 12 Championship lives on.

10-2 Wisconsin losses by 13 to an undefeated Ohio State. Sure, this game may not have changed much but adding the automatic bid to the conference winners suddenly means Wisconsin not only can make the 12 team playoffs but they have a chance to grab a first round bye if they upset Ohio State. The stakes have been raised up.

Boise State is 11-1 coming into this game and they have one loss on the road at BYU in a game they didn’t have their starting QB. Hawaii is 9-4 and basically eliminated from the making the playoffs since Cincinnati and Memphis are ranked higher than them and they are playing one another. Still, if Hawaii can somehow pull off the upset then Boise State is eliminated. Boise State is ranked #19 just two spots behind Memphis and ranked ahead of Cincinnati & Appalachian State. So with a Broncos win and a Memphis loss the Broncos are dancing.

Coming into this game Utah is #5 and Oregon is #13 so this game is absolutely gigantic for the Oregon Ducks who are currently on the outside of the playoffs. If you are Utah you are hoping for a win that knocks them up into the top 4 giving them a first round bye. Oregon beat Utah in reality meaning Utah drops but still makes the playoff and the Ducks get the automatic bid.

11-1 Appalachian State currently ranked #21 is rooting for #20 Cincinnati to narrowly beat #17 Memphis and then the Mountaineers need to beat 10-2 Louisiana by enough points that they can surpass Cincinnati and grab the automatic group of 5 bid. Is it likely? Probably not but certainly makes the game interesting to watch.

The Conference USA and MAC didn’t have a good enough team to get into the group of 5 bid talk so they remain as interesting as they previously were.

Let us take a look at the week before this though.

Here we go. The playoffs in November on Black Friday. Yes, I know that perhaps #24 Virginia Tech too would have gotten stomped by Clemson in the ACC Championship but now we have a bitter in-state rivalry with the ACC Coastal Championship bid on the line.

Two weeks in a row? What? Yes, Cincinnati came into this game ranked #19 and lost to #18 Memphis but the stakes would be much much higher if we knew the group of 5 automatic bid was on the line.

Troy was having a tough year since they had lost coach Neal Brown to WVU that offseason but still App State is alive to grab the group of 5 bid if the right things happen and say Cincinnati beats Memphis. App State needs to blow out Troy and make a statement to the country.

Boise State needs to make a statement here and win by a decent margin as their #20 ranking is just two spots back from the Memphis Tigers and just one back from Cincinnati who they eventually jump after the weekend.

Iowa is sitting in a tough spot sitting back #16 but if they can make a statement on the road in Lincoln and they need a lot of help. Basically, the Hawkeyes need Michigan to lose to Ohio State, Notre Dame to lose to Stanford and Penn State to lose to Rutgers to grab the 2nd to last playoff spot. The odds are against it but you know every fan in the state of Iowa would be watching those other games.

Big time rivalry that Clemson has owned lately but the Gamecocks can play a nice spoiler here and knock Clemson potentially out of the first-round bye if they can somehow grab the W.

Coming into this game Oklahoma is ranked #7 and Oklahoma State is ranked #21. I know it’s highly unlikely that Oklahoma State jumps say 10 spots but there’s perhaps a tiny bit of hope. Plus you get the chance to knock your bitter rivals out of the first-round bye spot potentially.

Auburn is coming into the game ranked #15 and Alabama is sitting pretty at #5. In reality, Auburn knocks off Alabama giving them their 2nd loss of the season and knocking them back to #13 where they miss the playoffs. Can you imagine the Auburn fans going crazy? Plus Auburn fans think they now may have clinched a playoff spot but finish #12 and miss out on the last spot because of the group of 5 automatic bid.

Minnesota is in control of its own fate sitting at #8. If they beat Wisconsin they are in the Big Ten championship and most likely a shoo-in for a college football playoff spot. Wisconsin is one game back but with a win here they would have the same record as the Gophers and the tiebreaker which would send them to the Big Ten Championship game and give them a berth in the College Football playoffs.

Georgia is ranked #4 and is still battling for a first-round bye and will need to take care of their bitter rivals.

The Buffs are battling for a .500 season on the road in Salt Lake City but Utah can’t afford a loss here. With USC right behind them in the PAC 12 South and with the tiebreaker on Utah. If Utah losses they don’t play for the Pac 12 Championship and are eliminated at any hope of making the college football playoff.

Yes, Kansas is easily the worst power 5 in college football at this time but can you imagine if they somehow pulled off this win and knocked out Baylor’s chances of making the college football playoffs?

Rutgers and Kansas are in similar spots here. They are easily two of the worst teams in the nation but an upset here against Penn State and the Nittany Lions are for sure not seeing any college football playoff.

FSU was in the middle of a horrible season and Florida has no chance at making the SEC Championship. However, the Gators are very alive for the college football 12 team playoff so they must not lose to their arch-rivals.

The Irish come into this game ranked #16 and things look bleak but perhaps if Penn State or Utah or Florida get knocked off then the Irish will find themselves in the CFP.

Oregon has already locked up the Pac 12 North but if they lose to Oregon State here then there’s a chance the Ducks miss out on the playoffs entirely even if they win the Pac 12 Championship. See if Cincinnati, Boise State, or App State ends the season ranked higher than the Pac 12 champion then two group of 5’s go.

Now, we could go to week 13 and see a number of meaningful matchups with playoff implications. The point of all of this is that the regular season just got way more important.

A 12-team college playoff is a win-win. The fans love it. It makes games more interesting. More teams have a chance to win it all. It’s a great thing for college football