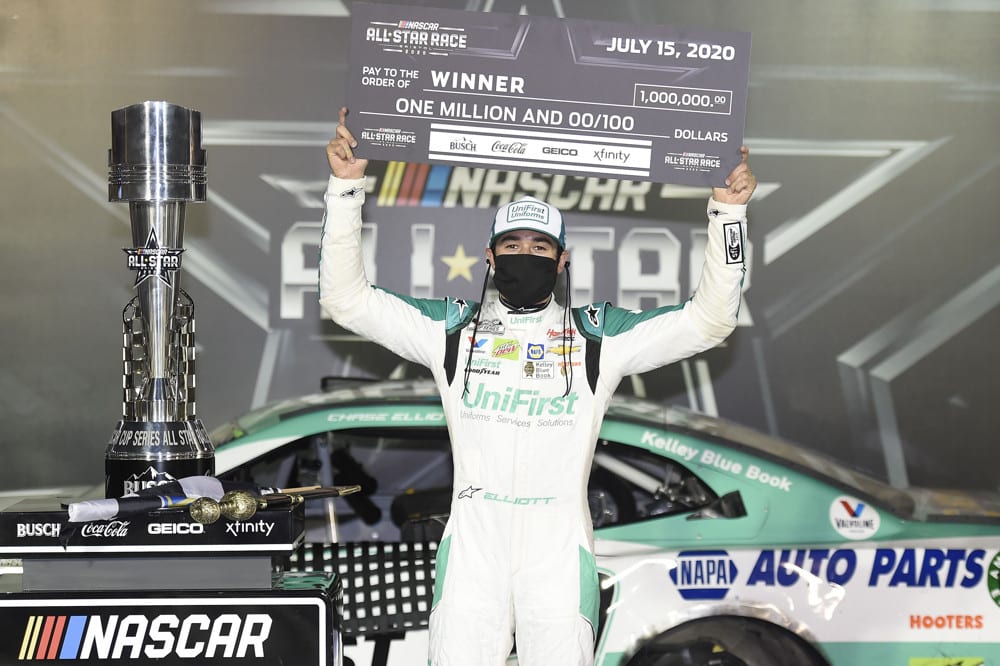 The “Greatest Season Ever,” shifts gears from its regular season to offer up the NASCAR All-Star Race this Sunday. For the first time in the history of the race, the best of the best will fight it out at the Texas Motor Speedway. This 100 lap test of skill will use the typical aero package for the 1.5-mile tracks but will utilize the engine setups for superspeedway racing. What does that mean? It means there will be a show you don’t want to miss this weekend.

Formatting for the All-Star race is unique. Instead of a straightforward 100-lap race to the checkered, there are several twists and turns thrown at drivers. If you are interested in what those are, you can find them here. This will mess with strategy somewhat. Although as we’ve seen multiple times this season, the cream usually rises to the top regardless of the circumstances.

That said, this article strives to bring you driver suggestions for your DraftKings lineups. They are meant to mix and match and do not suggest a full lineup. These are merely drivers to consider when constructing your rosters. As always, let’s make this a profitable season, and above all, let’s have some fun.

Looking back at Kyle Larson’s history at the Texas Motor Speedway is not advisable if you want to feel good about this play. In his 13 career starts in Fort Worth, he has only four top-10 finishes. On the bright side, of those, three of them have been inside the top-5. The downside, in his last five races on this track, he’s finished 36th or worse on three occasions. He has not shone brightly in Texas in the past. Of course, all this was when he flew under Chip Ganassi colors.

Luckily for us, he no longer carries that standard and has taken up with Hendrick Motorsports. The very same HMS team that boasts the most All-Star race victories in the history of the event. A Hendrick driver has taken the checkered flag nine times since the first running of the race in 1985. Larson will look to add his name to that list on the strength of two straight victories entering Texas. Two weeks ago, he dominated the Coca-Cola 600 only to travel West and do the same on the road course in Sonoma. He’s the hottest driver on the circuit, and this week, he starts from the pole. Also worth noting is his performance All-Star weekend in 2019 where he won the open then went on to win the million dollars. There is no reason to fade him this week, especially in cash games.

In the #11 car, Denny Hamlin has taken 30 regular season green flags at the Texas Motor Speedway. One less than half have resulted in a top-10 finish. He went 15 races between victories after winning back to back in 2010-2011 and then found his way back to victory lane in 2019. Hamlin has finished outside the top-20 in five out of the last eight races. In two of them, he finished in 30th and 34th.

Of course, all of that took place under normal race circumstances. These are not normal circumstances. The NASCAR All-Star Race comes with its own unique set of quirks that drivers have to overcome. Hamlin has done just that, turning in 11 top-10 finishes in his 15 All-Star Race appearances. This includes his million-dollar ride in 2015 where started from the pole and took home the checkered flag later that night. On a slate that lacks a ton of dominator point opportunities, place differential will be important. Hamlin should provide a fair amount of those by the end of the night. Especially in a field of 21 cars.

Once again NASCAR arrives at a track where Kevin Harvick thrives. In his 36 starts in Fort Worth, he’s finished tenth or better 23 times. Eleven out of the last twelve have been top-10 including eight top-5’s and all three of his track victories. Within this span, he’s also led 676 of the 682 total laps he’s led at the Texas Motor Speedway.

To add to these impressive accolades, Harvick has taken home the million dollar purse three times in the last eight seasons including three out of five between 2017 and 2019. The 2021 season has treated Harvick kindly for the most part. So far in 2021, he’s finished inside the top-10 in 11 out of the 16 point races this season. He knows what it takes to work the intricacies of this type of race and is all but a lock for another solid finish. His last three mid-season special finishes have been a first, a second, and a third. He’ll be another potential climber and dominator this Sunday.

Once again, the following play is not for the weak of heart. For Chase Elliott, life on the Texas Motor Speedway has been half good and half not as good. Elliott began his Cup Series career at the track with five top-10 finishes in his first six starts. His last four have been a mixed bag including 13th place, 32nd place, 12th place, and 20th place finishes. Regular reason history is not on the side of the pilot of the #9 Napa Chevrolet.

The 9️⃣ gets it done!

Retweet to congratulate @chaseelliott on his first #AllStarRace victory! pic.twitter.com/Z313jiHFJF

What is on the side of Elliott this Sunday is that he will not be running a normal race. On top of that, he, along with his teammates, is riding some serious momentum coming into the mid-season showcase. He’s coming off of back-to-back second place finishes to go along with his victory at the Circuit of the Americas road course. All told this season, he has 12 top-10 finishes in 16 races. He’s a steal at his price point for what he offers for this NASCAR All-Star Race slate.

The last driver to take home the checkered flag at the Texas Motor Speedway was Kyle Busch. He started from the 9th position in the Fall of 2020, led 90 laps, including the last one, for the win. It was his second victory in a six-race span as well as his fourth finish inside the top-10 over that time period. His 345 total laps led at Fort Worth over the last 11 races puts him in fifth place overall in that department. As is the case with so many tracks on the NASCAR schedule, Rowdy is good.

He is also a solid bet when it comes to favorable fantasy positions at the All-Star Race. Nine out of his last ten starts in the format have resulted in a top-10 finish. This includes a win in 2017, a 3rd place outing in 2019, and a runner-up finish in 2020. He’ll roll off in a favorable spot to collect a few dominator points and is more than capable of winning this race.

This is a star-studded and top-heavy slate with some expensive heavy hitters. To that end, you will need salary relief. A driver that offers that relief is Austin Dillon. Last season, he brought home a win for the #3 car in Fort Worth. It was by far his best finish at the track in his 16 career Cup Series starts. That said, he’s not all that bad on the Texas Motor Speedway as he’s been inside the top-15 in six out of his last seven starts.

Dillon has appeared in seven total NASCAR All-Star Races. He enjoyed his best finish of them all last season with 3rd place showing in Bristol. This season, he’s consistently been one of the top-15 cars from week to week so he can hang with the best of them. He’ll need to tap into whatever he had last Spring to hang with them again this Sunday. With the last cars in the race still to be determined, paying down for a potential top-3 finish with Dillon could make for a winning tournament move.