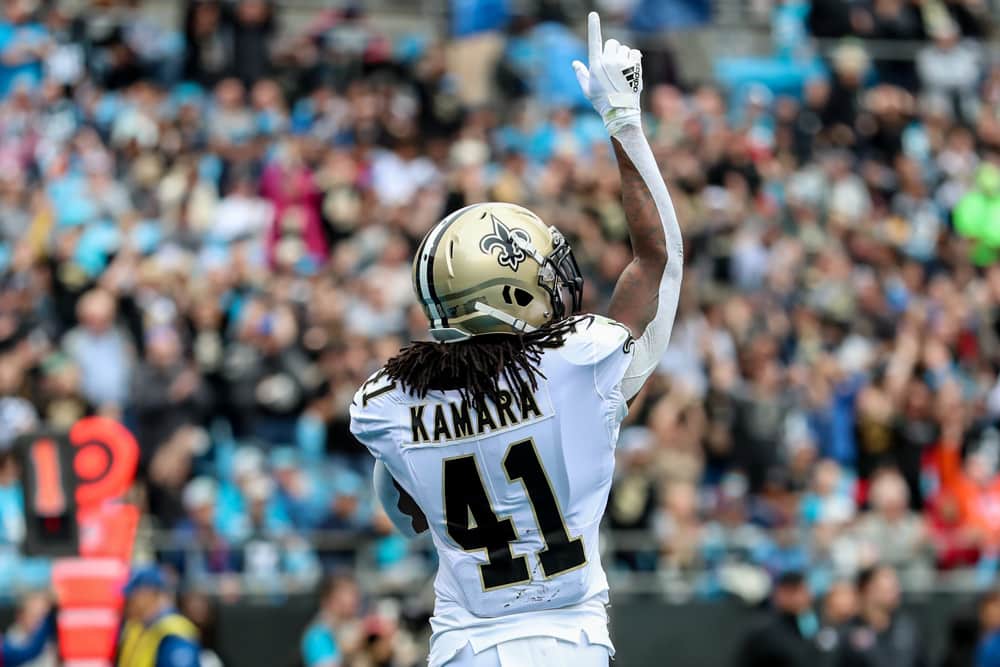 What is the best dynasty fantasy football startup draft strategy? You could ask multiple people in the fantasy community this question and get just as many answers.  Well, I am here to go through an approach that involves trading aggressively to get the guys you want. This approach may leave your team lacking overall depth but will land you studs atop each of your positional groups.  This is a good approach to try and win early on in your leagues. Let’s dive in and start breaking this down!

This is a very important section of your dynasty startup draft, no matter what league format you play in. When I am playing in Superflex leagues I  look to target quarterbacks and running backs. I prefer to come out of these rounds with two quarterbacks if possible, as this is the cheapest that they will ever be. Using average draft position(ADP) tools we see that 17 quarterbacks tend to be selected in this range. This shows us that many people take the same approach. These ADP tools can help you greatly as they can help you to decide which players you need to trade up for.

If we are playing in a one quarterback league we can still use the trade-up approach as well. With this approach, I am looking to acquire running backs in the top three rounds for sure. For most leagues running backs great value, so landing three or four early workhorse running backs will set you up for title runs. Just like quarterbacks in Superflex, this is the cheapest running back prices will be in your leagues.

While making a move up to grab a stud, look to move picks in the later rounds to sweeten the deals. For example, I usually like to try and make a move with the pick from the same round while adding a seventh to ninth-round pick to it. Also adding future rookie drafts here would be a wise move as well. In the early rounds we know we are acquiring very good players that are established in their roles. While the rookie picks will be future gambles. This guaranteed production is worth every penny it costs.

This is correct. One of the rare time i ever trade away future draft capital.

23 1st for a 7th rd start up which helped make other moves.

For me, this is the sweet spot for wide receivers mainly. The depth in NFL at wide receiver is great, this translates to depth in fantasy as well. The names like A.J. Brown and Justin Jefferson are nice don’t get me wrong. However, passing on them for running backs early allows you to target this area of wide receivers. Although the depth is great here at wide receiver, at times we can see a few running backs and quarterbacks fall into this range. If we do attack with a trade-up approach you can start winning big in the middle rounds of your dynasty startup draft.

This is great value if a player like Joe Mixon or Jalen Hurts falls here. I personally look to build my championship team in these rounds. While acquiring more picks in this round sending future firsts is still good value, as these players are still solidly planted in their roles. In these rounds, you should be able to send just future picks straight up for a pick in any round. I advise this as you can go get these guys we know are proven! Dynasty football is more fun when you get “your guys”.

I just traded this in a dynasty start up league:

Why? Because I don’t like future picks. #fantasyfootball #trades #dynastyleague

If you want to just move up in this range it shouldn’t cost you as much as the earlier rounds. In a move-up situation you should have a guy in mind before moving up, so get to the soonest pick you can. While trying to move up here sending late picks that range from round 11-16 will get the job done most of the time. If not a second in future picks should. This is a move I am comfortable making at this place in the draft. Always remember these established players are safer and better bets than most rookie picks.

As the draft moves into these rounds trading can increase again. I like to try and package multiple later-round picks to add more in this range. This is where depth can really be found. A lot of older players tend to fall into these rounds as well as high upside “boom or bust” players. The value to move around picks here decreases as well. I prefer not to move early future picks in trades here, however. While you can find good value and solid players in these rounds, most of them carry just as much of a gamble as the rookies in the future.

However, if there is a player I am extremely high on moving a third-rounder or two in future years is not a terrible move. The key in these types of trades is to chase the value. These picks can be great added value if you are involved in trades earlier in the draft. You can use them to sweeten the package to move up in the earlier rounds. Adding a 17th to a package that gets you an extra 7th or 8th will pay off for early success in dynasty.

Ultimately a dynasty startup draft is a ton of fun and you can have many approaches. No single approach is the correct approach, knowing what you want is the best approach though. Come into these drafts with an idea of what you want your team to look like, and make trades to achieve this goal. Sending future picks or multiple picks to get your favorite players is not a dumb move. Do not be afraid to go and get these players no trade can be judged at the moment as it takes time to see the true value of trades.  Dynasty is always more fun when you like your team. Always remember it’s your team, do what you want with it!