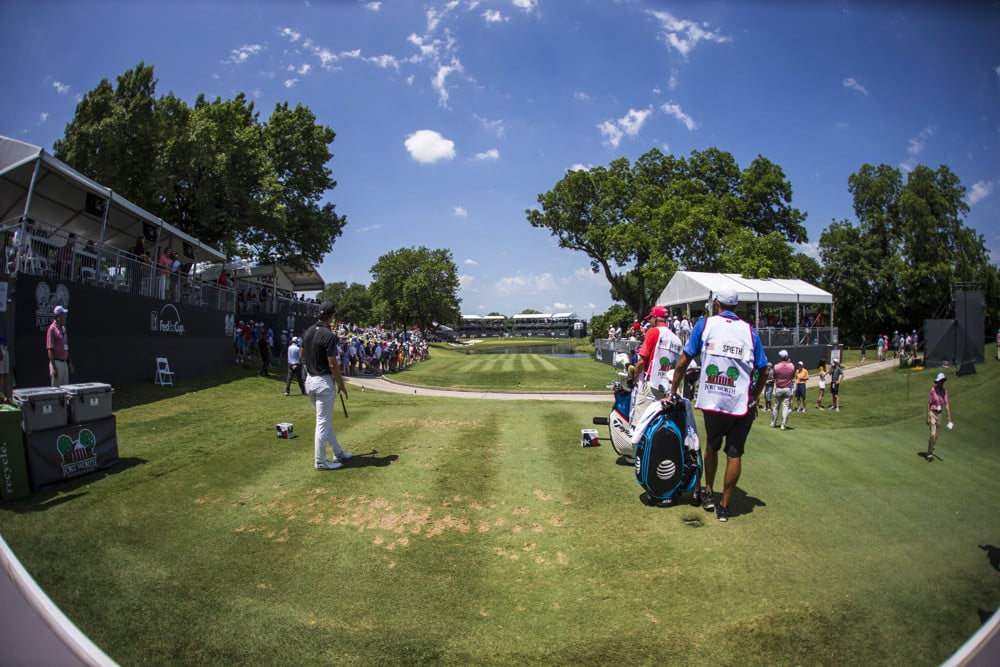 Headlining the field this week is Jordan Spieth. Spieth was a popular pick to win the PGA Championship, however, a poor Friday ruined his chances. Spieth won this tournament in 2016 and is very strong at this course. He will be a big favorite once again.

Also headlining the field is Justin Thomas. Thomas was very disappointing at the Ocean Course. Justin Thomas has historically struggled in tournaments that were windy and firm. The wind won’t let up in Texas this weekend with winds expected to reach 20 MPH. He’ll have to overcome his struggles in blustery conditions to get a good finish.

The Colonial Country Club was built in 1936 in an effort to prove naysayers wrong. It was speculated that bentgrass was too fragile to withstand the hot Texas heat. Most golf courses in the area strictly utilized the native bermudagrass. Taking up the challenge, club founder and golf nut Marvin Leonard constructed the grounds entirely of bentgrass.

Unfortunately, the first incarnation to create a sustainable bentgrass golf course in Texas failed. It was simply too hot for the bentgrass fairways and rough to withstand the summer heat. As a result, those were transitioned to bermudagrass full time. However, the greens remain comprised of bentgrass and are some of the best-maintained greens offered on the PGA Tour.

Unlike other Texas golf courses, Colonial also features sloped fairways and some elevation changes. That will force the golfers to accommodate for uneven lies several times a round. The routing of the golf course is also very creative. Hole after hole players tee off in different directions. This also can be challenging in windy conditions.

Something that makes Colonial Country Club a great golf course is that it’s located right in the heart of downtown Fort Worth. There is a tremendous bond between the community and the private country club. The tournament is also rich in tradition as one of the oldest on the PGA Tour. It also has a murderers row of former winners – Ben Hogan, Sam Snead, Arnold Palmer, Ben Crenshaw, Lee Travino, Jack Nicklaus, Tom Watson, Phil Mickelson, Sergio Garcia, Justin Rose, and Jordan Spieth

Lastly, here are two videos from the boys of No Laying Up covering Colonial Country Club. The first one discusses what the tournament and the country club mean to Fort Worth. The second one shows them take on the Horrible Horseshoe, a grueling trek across the third through fifth holes and is one of the tougher three-hole stretches in golf.

Colonial Country Club is only about 7,200 yards, but its primary defense is narrow fairways, strategically placed bunkers, and doglegs. For years, the golf course was known as a less-than-driver golf course where positional golf reigned supreme. Typically, shorter and more accurate players with great short games had the decisive advantage in the tournament. It was penal to find yourself in the 3-inch Bermuda off the fairway. It made hitting the green in regulation very difficult.

Unfortunately, the golf course is starting to become obsolete with advancements in technology. In the return to golf last year, the tournament saw an All-Star field whose primary weapon was the driver. These players took aggressive lines off the tee to take all the trouble out of play. They also fearlessly bit off large chunks of the holes by hitting over the doglegs. Usually, the average driving distance for this tournament is about the PGA Tour average. Last year, it was 4 yards farther than the PGA Tour average. Part of this is explained because of longer players on the field. But players were definitely not afraid to hit the driver over and over.

As a result, the doglegs and bunkers weren’t relevant for the longer players. Even if they find themselves in the rough, it’s not as challenging to pop the ball out of it with a wedge. Shorter hitters still had a shot because they could hit from the fairway into the average-sized greens more often. But they no longer held as big of an advantage as before.

1. Target golfers who perform well at golf courses with low fairway hit percentages: Colonial Country Club features some of the hardest to hit fairways on the PGA Tour. The PGA Tour Average over the last 5 years for driving accuracy is about 60.5%. The average driving accuracy at Colonial Country Club since 2015 is 56%. Players who tend to do well when the field overall hits fewer fairways should feel comfortable in this type of tournament.

Taking these two thoughts in mind, here is a list of golf courses that typically see below average rates of fairways and greens in regulation hit:

There are a few golf courses on this list that look nothing like Colonial Country Club. Bay Hill, Torrey Pines, and Quail Hollow are all much bigger ballparks than Colonial is. But all of them share the same trait of low-hit fairways and greens. It’s an unconventional strategy to use these golf courses as comps for this week. But how players attack Colonial Country Club now is much different than it was just a few years ago.

Lastly, here are players in the field who have gained more than a stroke per round (minimum of 10 rounds) on the field at Colonial Country Club:

There’s a mix of lots of different players in this list. But if you cross-reference a lot of these names to the golf courses listed above, you’ll see several guys who play well at both.