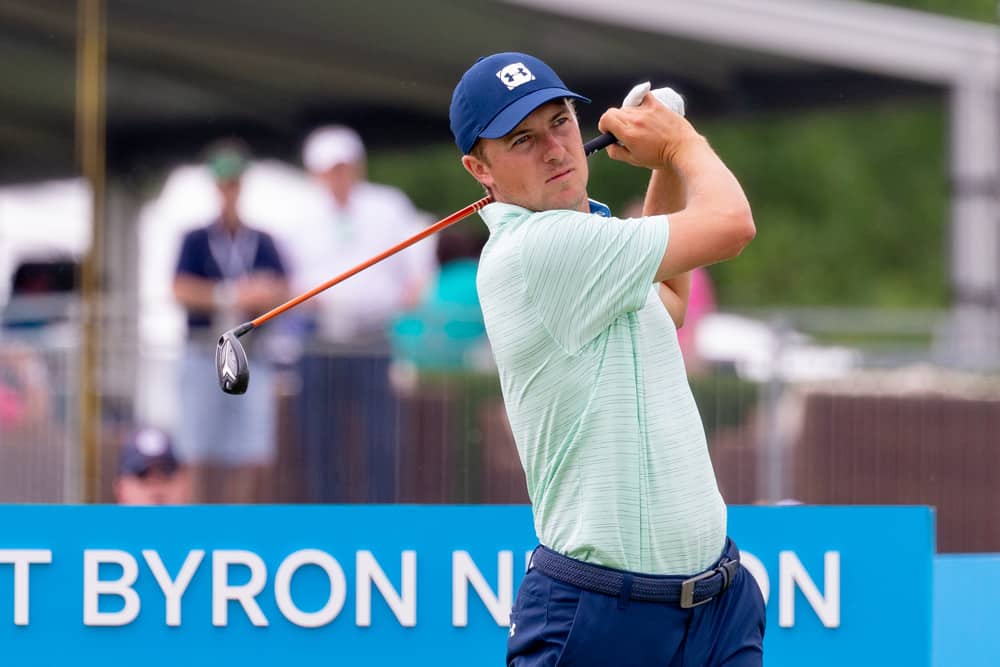 Headlining the field is Dallas’ favorite son, Jordan Spieth. Spieth has won already in Texas in 2021 when he took down the Valero Texas Open in San Antonio. Spieth is playing well on the eve of the PGA Championship. A win in his hometown would be great for his momentum heading into Kiawah.

Also headlining the field is 2021 Masters Champion Hideki Matsuyama. After his victory lap in Japan, Hideki returns stateside for a final tune-up before the PGA Championship. He’ll look for a good finish before vying for his second consecutive major championship.

The AT&T Byron Nelson is one of the oldest tournaments on the PGA Tour. Yet it has had a very difficult time finding itself a permanent home. The tournament debuted in 1944 at Lakewood Country Club. It was played at over a dozen other golf courses in the Dallas Metroplex before finding a stable home at TPC Four Seasons.

In 2018, the tournament moved once again. This time it went to the Bill Corre and Ben Crenshaw designed Trinity Forest. The golf course was built atop an old landfill and was a nerdy golf architect’s dream. It looked absolutely nothing like anything that had been seen on the PGA Tour. There was no rough on the golf course. There was significant mounding, especially on the greens. The course was designed to play firm and fast like that of an Australian Sand Belt course. There was a lot of intrigue of how the PGA Tour would fare on this type of setup.

Unfortunately, the reception from the players was overwhelmingly negative (save for the Australians who liked that style of golf). Matt Kuchar was publicly vocal about his displeasure with the new golf course. And the PGA Tour, in-kind, did its best to soften up the place to try and make its players happy. But after COVID canceled the tournament in 2020, tournament organizers (and the PGA Tour) took the opportunity to move it to its new home, TPC Craig Ranch:

TPC Craig Ranch first opened in 2004 and was designed by Tom Weiskopf. Weiskopf had a very successful stint as a professional golfer. He won 16 times on the PGA Tour, including the 1973 Open Championship at Royal Troon. After his playing days, Weiskopf became a successful golf architect. His first course was named, appropriately, Troon Country Club in Arizona. His most notable work includes TPC Scottsdale (home of the Waste Management Phoenix Open) and a restoration of the North Course at Torrey Pines (holder of one round of the Farmers Insurance Open).

The golf course has some interesting topography. It works its way around Rawlett Creek and the surrounding ravines. There are some very interesting views of the creek and creek beds from tee boxes and fairways. Unfortunately, the creek doesn’t come into play all that often. It takes a big miss off the tee on 1 to find the creek. While technically a player could take the creek on at the third hole, most players will opt to take a safer route around the hole to take it out of play. It takes a very poor approach shot on 9 to find its way into the creek. And it doesn’t come into play at all on the Back Nine. But it does look pretty and provides some good eye candy on the golf course.

Tee-to-green, however, the golf course doesn’t offer many thrills. There are some decent mounding and run-off areas around each green. But the routing tee-to-green, as well as the bunkering, is kind of bland. That’s by design. Tom Weiskopf is known to build no-nonsense golf courses. His designs are very subtle, straight forward and predictable. He’s even on record of saying “We don’t build blind shots for one simple reason. Liability”.

For agronomy nerds, the fairways are zoysia grass and the greens are bentgrass. Zoysia is a spongey turf that is a member of the poa family. It’s not seen on many golf courses on the PGA Tour. It was, however, the grass of choice at the former home of the AT&T Byron Nelson. Trinity Forest also featured zoysia fairways and bentgrass greens. Another notable zoysia fairway/bentgrass greens combo seen on the professional circuit is Bellerive Country Club, home to the 2018 PGA Championship.

Because this is the first time TPC Craig Ranch has host the AT&T Byron Nelson, there are a lot of unknowns into exactly how the course will play. Everyone will be clamoring to find comparable golf courses and try and cross-reference top players at those places.

Let’s start first with Tom Weiskopf himself. He’s designed two other golf courses played on the PGA Tour – Torrey Pines North and TPC Scottsdale. Unfortunately, only one round of the Farmers Insurance Open is held on the North Course at Torrey Pines, and there’s no ShotLink data behind it. As such, bettors can’t rely much on that one. But it can utilize the wealth of history and ShotLink data at TPC Scottsdale.

There is definitely a lot of TPC Scottsdale in TPC Craig Ranch. Both golf courses aren’t all that exciting tee-to-green and plays all out in front of the player. There’s plenty of room to navigate off the tee. Both feature some inconvenient bunkering off the tee, but off-line drives aren’t totally dead. They each are relatively flat in terrain. Both feature similar speed greens. They each also make use of drivable Par 4’s to give players an opportunity for Risk/Reward birdies. TPC Scottsdale is a solid comparison to TPC Craig Ranch.

There’s also the angle of Zoysia Fairways/Bentgrass greens. The immediate comparison is to look at Trinity Forest. From a tee-to-green standpoint, both golf courses couldn’t be more opposite. TPC Craig Ranch is about as plain-jane vanilla as a golf course comes. Trinity Forest has no rough, wide fairways and multiple routes to the hole. Yet players need to hit the correct side of the fairway to access pin locations because of the undulations and shelving of each turtleback green. However, the PGA Tour did a great job taking the teeth completely out of Trinity Forest, and the golf course played more like a dartboard. Scoring should be similar to what it was at Trinity Forest. Drawing cross-comparisons based on turf alone is acceptable even if the golf courses are night and day different.

In fact, there’s some cross-over with some of the names mentioned above that have success with other Tom Weiskopf and Zoysia golf courses. Marc Leishman won the Farmers Insurance Open at Torrey Pines, which was partially held on the North Course. He also played well at Trinity Forest. Webb Simpson won the Waste Management Phoenix Open in 2020. And James Hahn had the lead alone on the Back Nine at the 2021 Waste Management Phoenix Open before letting that slip through his fingers. He also owns four other Top 25 finishes at TPC Scottsdale.

So what worked at both TPC Scottsdale and Trinity Forest? Here’s the relative skill set charts for each golf course: 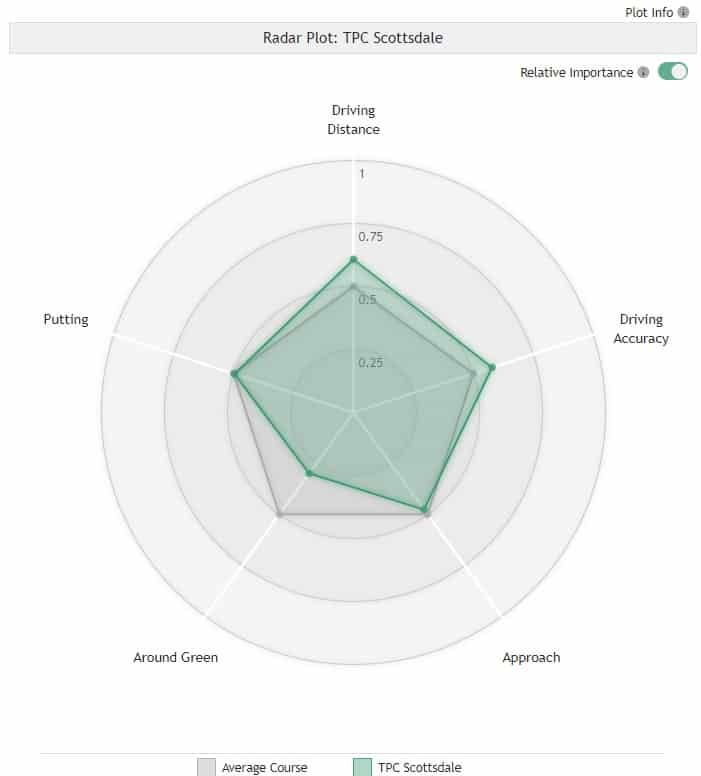 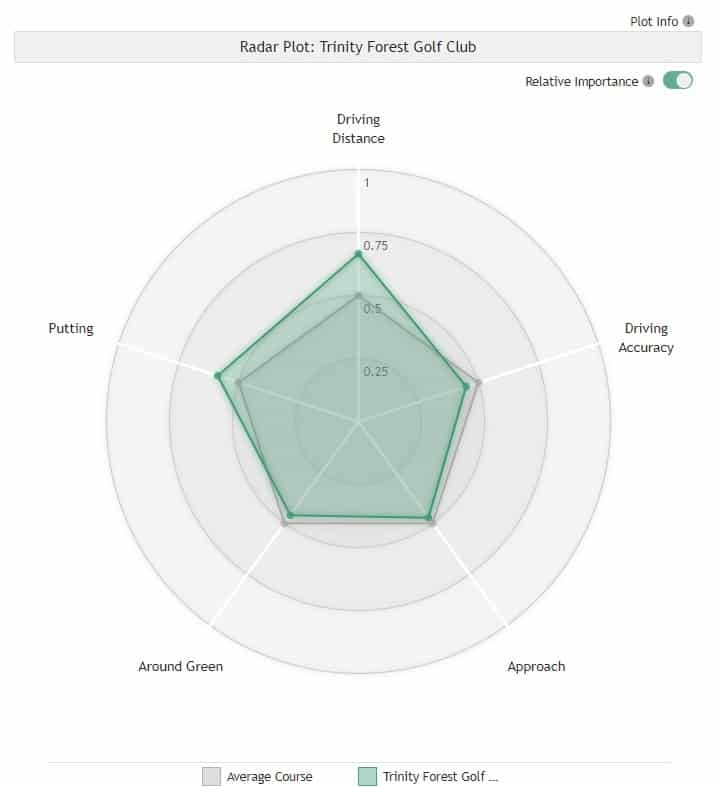 Both golf courses place a reward on driving distance. While driving accuracy was not nearly as important at Trinity Forest as it was at TPC Scottsdale, that can likely be explained away by the soft conditions and absence of rough. Players could blast it almost anywhere at Trinity Forest and still be able to access pins. That’s not quite the case this week. Performance off the tee should resemble more like TPC Scottsdale.

In addition, the rough at TPC Craig Ranch is Bermuda. While some golf courses often opt to overseed to give it an emerald green complexion, it appears as though they’re letting it play naturally. Some Bermuda is starting to emerge from dormancy, with blotches of dormant rough remain on the golf course. Lies on drives off the fairway could be inconsistent. For bombers, it probably doesn’t matter. But for those without elite driving distance, there might be a bit more of a premium on hitting the fairway this week.

This is just a piece of the puzzle that gamblers must solve this week. With so many unknowns, keeping things simple might be the way to go. Look at both recent and long-term form and try and exploit mispriced golfers for both outrights and matchups. Then incorporate the information described above to either solidify a lean or to break ties.