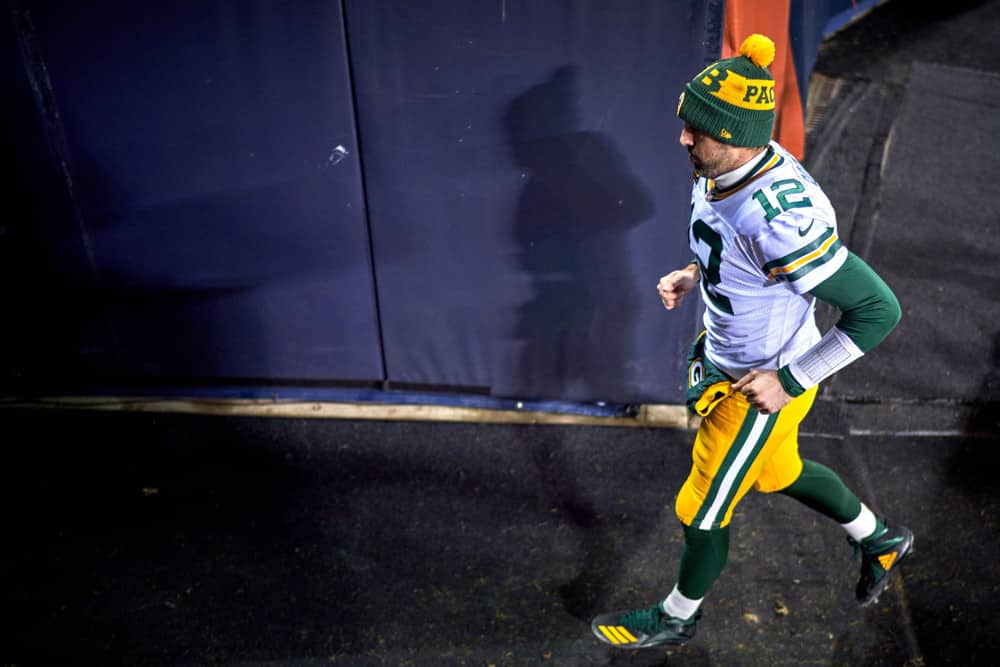 There were lots of great stories to come from the NFL Draft but one had nothing to do with teams reaching, players sliding, or scheme fit. On the night of the first round, it blew up that quarterback Aaron Rodgers wanted out of Green Bay. Days ago, he was even threatening retirement and then he softened his stance by saying it was either him or the GM. Will this land Aaron Rodgers a new team?

There is nothing like an ultimatum from an entitled and grudge-holding athlete right? The situation does not look encouraging for Rodgers to be playing in Green Bay next season.

The betting markets quickly responded to this, God bless them!  Most sportsbooks took Green Bay futures off the board, replacing them with where he might take snaps next season.

Let’s have a look at how we might be able to profit from this emerging situation. This is actually an interesting bet as it combines a lot of factors, which definitely means the odds are probably not in our favor. There does not seem to be a lot of urgency on either side to get this resolved quickly either. It will be interesting to see how these odds move over time.

This is the least interesting bet to make but oddsmakers still see it as the most likely option, right now. That actually says a lot about the situation too. It is hard to disagree but it is also hard to see how this gets walked back. Should MVPs get special treatment?  Sure! Should they be able to get GMs fired for moves they don’t like?  I hope not.  Do not make this play unless you think retirement is also on the table. I am pretty sure retirement leads to a no-bet. I have not seen a book posting odds on retirement. Take the classy Barry Sanders way out, I dare you Aaron!

This is the move that makes the most sense though I am not sold Denver is a real contender if they swap Drew Lock for Rodgers. Would they be improved? Of course but KC would be still ahead of them and there is a lot to like about what is going on in San Diego too. Also, playing at altitude can be a little funny.  Might it affect him a little? The Broncos do have players and picks but I am not sure they are ready to go all in. Denver seems to have the weapons to keep Aaron Rodgers happy if they are his new team.

The Raiders are always willing to go all-in and assuming they include Derek Carr in any deal the Packers can still have some optimism in the short term too, that might be enough to get a deal done. The NFC Central is still winnable with Carr at the helm and they don’t have to overhaul the offense. Similar to the above I am not sure this move would make the Raiders an instant Super Bowl contender or how much that even matters to Rodgers. It would make the Raiders more interesting though and that matters…at least to them.

I think Washington is actually the most interesting team in consideration (we think). For starters, if they get Rodgers they are definitely the favorite to win their division and return to the playoffs, plus he is signed for a few more years so they can kind of build a little with him too. Washington can offer back Ryan Fitzpatrick, a perfect one-year starter or backup for Jordan Love. I am sure they can make the accompanying picks and players work if they want to make this happen. The major obstacle for this one is that Rodgers has said he wants to go West to play. That is not Washington, also, if you don’t like what is going on in Green Bay I can’t imagine finding your best self playing for Dan Snyder in Washington. Thought that kind of makes me want this to happen more.

I am not expecting this to happen but what if Tom Brady got hurt in training camp and couldn’t go. This team is tailor-made to have a veteran quarterback drop in and win, perhaps win it all. Even though, everything else is in place if this is Aaron Rodgers’ new team.

Recommendation:  These are pure rumor plays so the odds might move fast depending on what we hear. You might see Washington jump up based on some interview with an assistant coach but it will be a while before anything like a true need might shape things. If I had to make a bet right now I would go with the Raiders. They would seem to be the most willing and have enough to offer. +500 is not bad either for pure speculation.