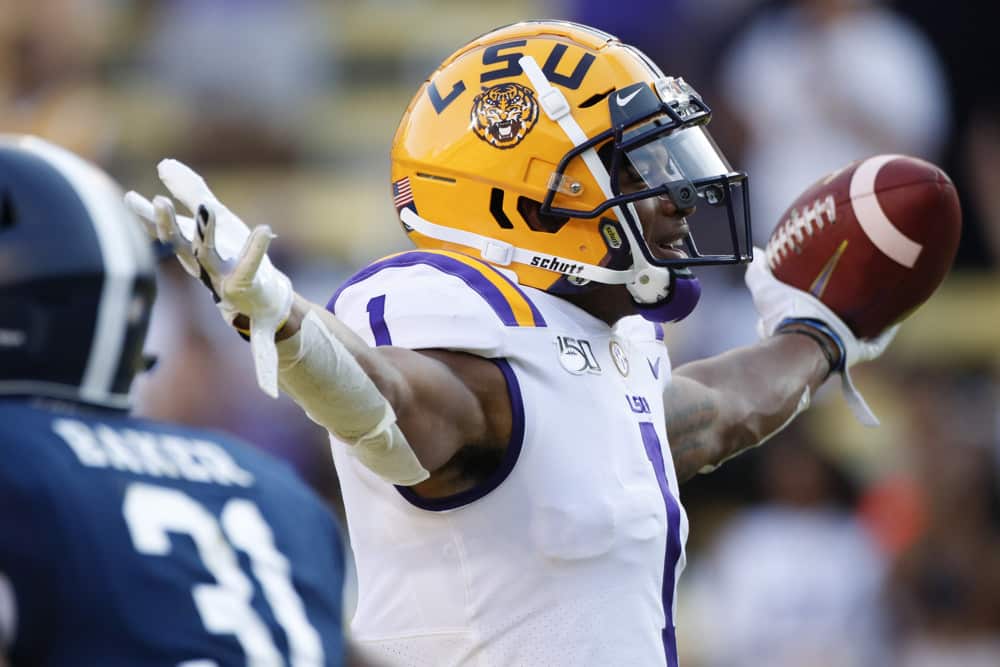 The draft fell perfectly for all of the players in this tier. Ja’Marr Chase is getting reunited with Joe Burrow, the two produced 1700 yards through the air and 20 touchdowns. He is joining a team that passed 60% of the time in neutral game scripts this past season. A top-15 finish for Chase is well within the grasp, and he will be my 1.01 in any one quarterback leagues. Chase sits atop the rookie rankings without any questions.

The 1.05 pick officially puts Ja'Marr Chase in my Transcendent tier.

This is the rookie year target share of all Transcendent Tier WR's.

Javonte Williams remains my top running back after landing in Denver. Although he has to share a backfield with the aging Gordon in year one, year two it will be his backfield. The Broncos offer more than 350 opportunities to their running backs, in both the passing game and ground game. Gordon began to get limited touches as the season went on last year. This is Williams’ way in, and we saw what Williams has done with limited carries at UNC. He had two seasons with more than 900 yards on about 160 carries, Phillip Lindsay saw 118 in 2021. Williams will have an opportunity to produce low-end RB2 numbers in 2021.

Jaylen Waddle comes in as my WR02 after landing in Miami and reuniting with Tua Tagovailoa. He is also joining a team that passed at 59% in neutral game scripts while running 3WR sets 55% of the time. Most likely he will fall into the slot role and can develop into Tua’s favorite target. He is a big play waiting to happen, he has the best chance to become Tyreek Hill of any player in this class. Waddle has WR1 upside, although in year one we should limit expectations to WR2 numbers.

Jaylen Waddle averaged 123.8 yards per game FROM THE SLOT ALONE last season. He was averaging a smidge under 20 yards per route run (absurd). Nick Saban compared his competitiveness to Kobe and MJ.

The Dolphins offense just got a lot more explosive.

Terrace Marshall rounds out my top ten and second tier. Landing into Carolina is a great spot although on paper it does not look great. Let’s break it down quickly though. 59% neutral game script passing offense, he slots in as the wide receiver three this year. Marshall can play a big slot role and become a security blanket for Darnold. In year two, he may be able to take over for Robby Anderson and the sky is the limit! Patience is a virtue with this pick.

Highest among all WRs since 2019#NFLDraft2021 pic.twitter.com/9OfOWRfy9d

One of the biggest climbers in this tier is Nico Collins, he lands in Houston and has a chance to contribute right away. Houston threw 64% of the time in a neutral game script last year. They lost Will Fuller in free agency and only have Brandin Cooks left as a proven NFL receiver. Collins should come in and get WR2 usage,  getting easily 70 targets. I can see him drawing lots of red-zone targets due to his ability to leverage out defenders and win contested catches. WR3 numbers is his floor with WR2 upside if he can take over the red-zone targets.

Micheal Carter is also a huge mover after landing in a prime landing spot. The Jets were one of my favorite landing spots for a running back. So for me, it is easy to move Carter up. He will fit perfectly into the zone running scheme the new staff is bringing over. There will be an open competition for the lead role and I can see him winning this role and has RB2 upside.

Pat Freiermuth lands in Pittsburgh and cements him as the tight end two in this class. I love the landing spot on a team that passes over 60% of the time in neutral game scripts. He will have a chance to take over Eric Ebron who had 16 targets in the red zone this past season. Mid-level TE1 numbers are not out of the question for Freiermuth if he wins the starting role in camp. If not he will take over in year two after Ebron’s contract is up and the sky is the limit for him.

Amari Rodgers landing in Green Bay is going to produce wonderful fantasy production. Rodgers is a versatile receiver who has been compared to Randall Cobb. He should see a heavy workload in the slot and out of the backfield. Rodgers will be a PPR machine and has WR2 upside. Do not pass on him in the second round of your drafts! Rodgers has the talent to be a sleeper in the rookie rankings.

The Packers add a weapon in Clemson's Amari Rodgers with the No. 85 pick in the #NFLDraft pic.twitter.com/pxsrYa4XiU

Dez Fitzpatrick lands in a spot where he will have an abundant amount of opportunity to produce. The Titans have over 170 vacated targets, and only roster AJ Brown and Josh Reynolds. Fitzpatrick brings size and good speed, he will play outside across from Brown. He has all the ability to fit into the  Corey Davis role.  WR2 upside is here for Fitzpatrick, don’t miss out on him early in the third round of your rookie drafts.

Frank Darby landing in Atlanta is the perfect thing for his career path. He is super raw and has great talent, however, he needs time to refine this talent into useful skill and production. Getting to sit behind Julio and Ridley will allow the time needed for this maturing. Not only will he get time but also two great mentors. He needs to clean up his routes and who better than Calvin Ridley to learn from. If he can refine all this the sky is the limit and Top15 type numbers could be obtained. He is a stash in any dynasty format so do not miss out on this raw talent before he jumps up the rookie rankings.

Tough, physical, faster than you think, and a layer to watch for 2022 and beyond.

This tier is full of late-round dart throws for sure. However, a few names that were ranked higher pre-draft fell to this tier. Kylin Hill and Jermar Jefferson both fell to the late 7th round in the NFL draft. This is concerning for their fantasy outlook, both landing in not great spots as well in Green Bay and Detroit. Both still have good tape and decent profiles so they are worth a flier, it will just be a long road to any fantasy relevance for both of them.

I LOVE the Kylin Hill pick for the #Packers. He was an early Day 3 player by consensus.

Packers might have the most rocked up RB room in football now too. Hill is a muscled up 214 and runs with downhill power. Terrific fit in the offense.

Dazz Newsome is a player who got drafted late on day three however lands in an interesting spot. Landing in Chicago gives him a chance at a long-term role in that offense, outside Robinson the wide receiver core is largely unproven. Newsome showed nice flashes at times last year at UNC and could be a surprise out of this tier. It is a long shot but if he can get into the top three on the depth chart low-end WR2 numbers are not out of the question here long term. Newsome could be a big-time climber in the rookie rankings.

In deeper league formats these are good stash players who have a chance to make their teams rosters. They may take time but could develop key roles down the line and climb up rookie rankings.